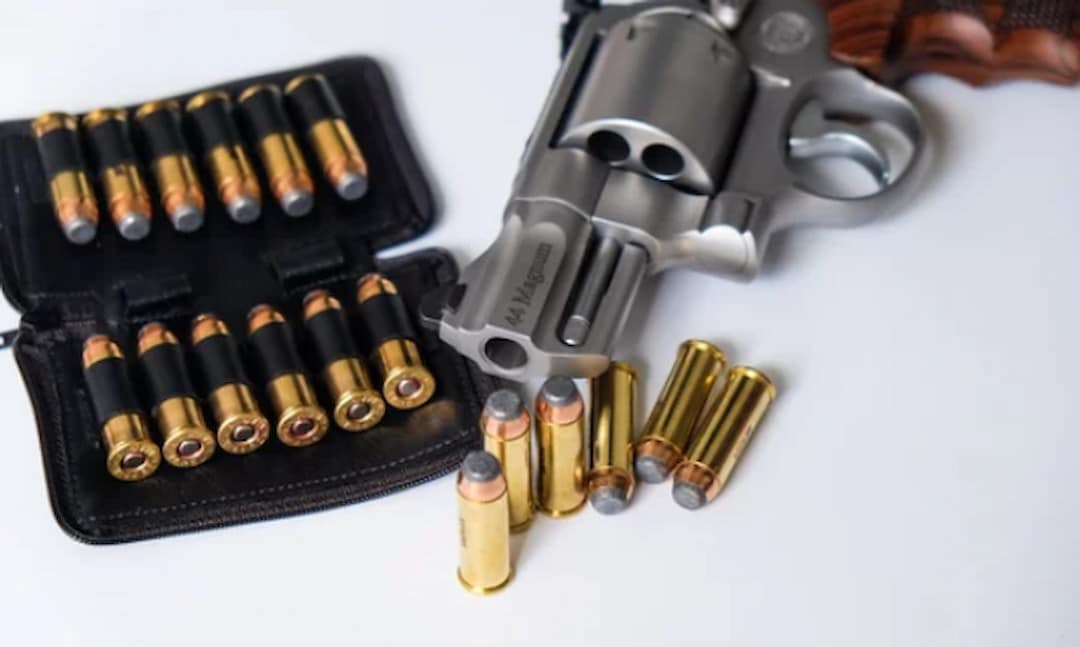 The 44 Magnum revolver bullet is powerful. It was a more effective cartridge for the 44 S&W Special, its progenitor cartridge.

“Dirty Harry,” Clint Eastwood’s 1971 film, was the catalyst for its rise to fame among law enforcement officers, hunters, and aficionados of hunting rifles. Given its popularity, ammunition is never an issue, and the best part is it’s not prohibitively pricey.

Since it is a revolver cartridge, many revolvers can fire it. It's best not to load them into a smaller weapon as hunting bullets. This article looks to discuss the 44 Magnum bullet size and its applications. Let's dive in! 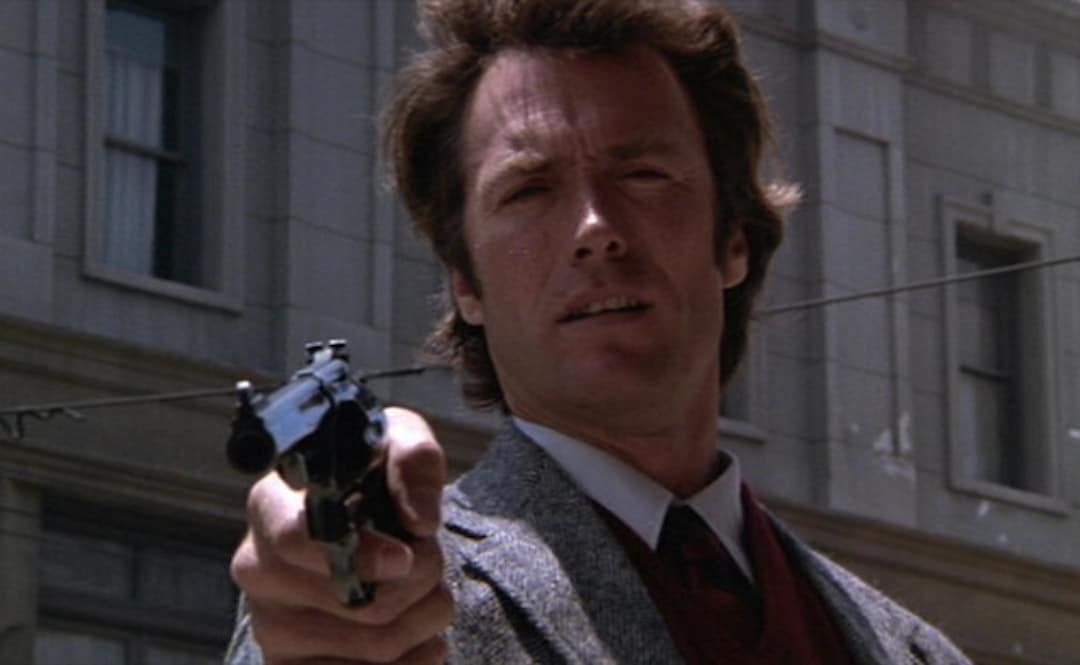 It’s considered the industry standard. Also, it weighs 240 grains, accelerates at 1,350 ft/sec, and has a muzzle energy of 971 (ft-lbs). It features a lead bullet with a diameter of.429 inch.

The ammunition is 1.61 inches in total length. It also uses a large handgun priming and shoots at a pressure of 36,000 (psi).

The.44 Mag’s case is usually longer than its progenitor cartridge, the.44 S&W Special, but this is not because of a larger powder capacity. It avoids unintentional loading into earlier handguns designed for the.44 Special, which are incapable of handling the Magnum’s force.

Although the 44 Magnum and 44 Special are interchangeable, it is impossible to fire 44 Magnum rounds from revolvers chambered for 44 Special cartridges.

The 44 Magnum cartridge, which was originally designed for revolvers, is now available in a wide range of handguns, such as 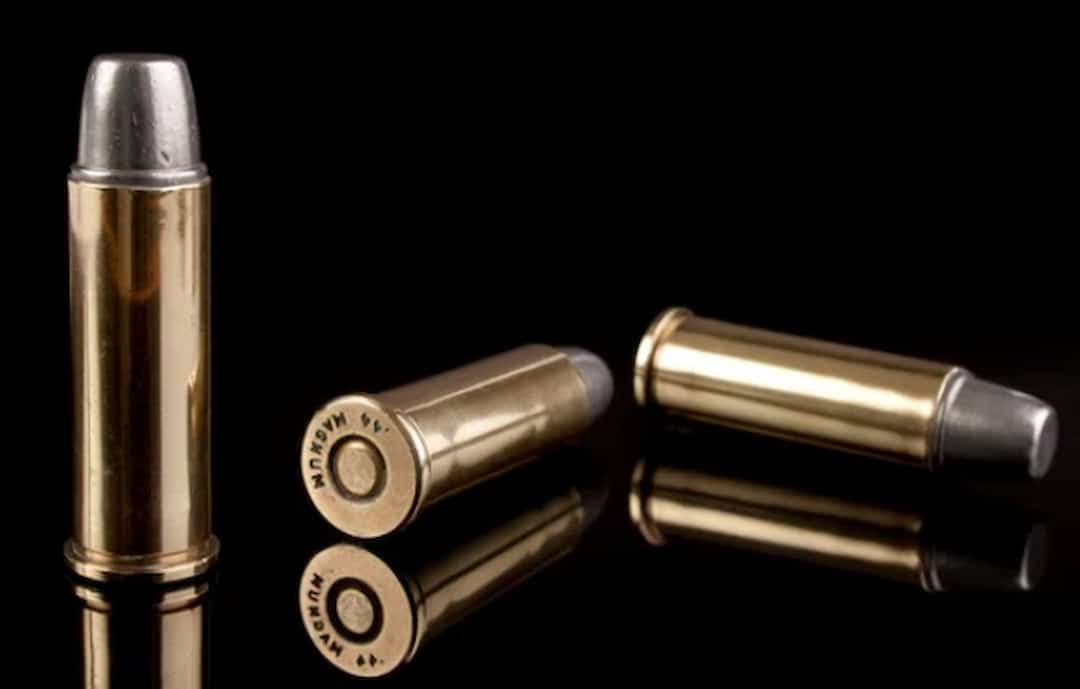 The 44 Mag, often known as the.44 Remington Magnum was first introduced to the public in 1956 and is both an iconic and efficient round.

Elmer Keith, Remington Arms Company, and Smith & Wesson partnered on the design. Before, the 45 ACP was the most powerful handgun cartridge in the world for many years.

Despite today's sophisticated ammunition, 44 Mag is still a popular choice for professional and recreational shooters across North America.

After years of custom loading the 44 Special, Elmer Keith created the 44 Magnum cartridge. Keith designed high-pressure loads that blasted a heavier bullet faster and more robustly than what was available to develop a 44 caliber cartridge for handgun hunting. 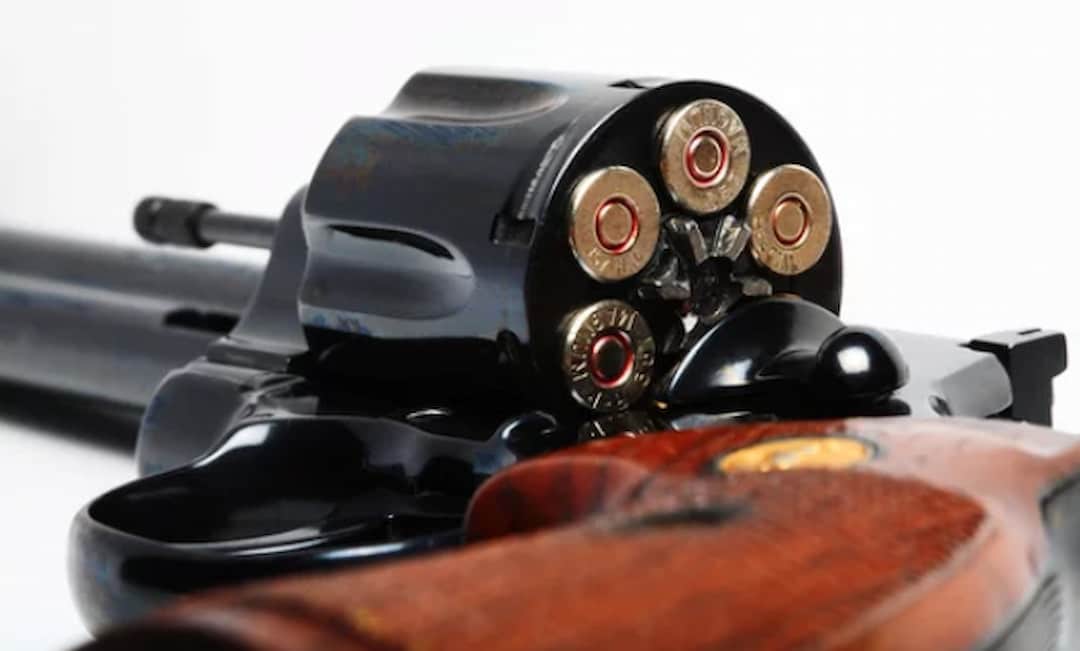 In December 1955, Smith & Wesson offered Keith the prototype of the new revolver before releasing it to the public in 1956.

Although Smith & Wesson was the first company to produce the ammo, it wasn’t them who released the first 44 Mag handgun.

Employees of Sturm, Ruger Ruger producing bullet groups, recovered 44 Magnum rounds at a junkyard. That was before the public launch of the Model 29, and they concluded that the company was about to introduce a new bullet. It led to Ruger rapidly developing and manufacturing the classic single action revolver.

In 1956, just before the Smith & Wesson Model 29 made its public debut, Ruger introduced the 44 Magnum Blackhawk revolver. There was an immediate surge in popularity for this model of Blackhawk because of its affordability and availability.

Compared to the 44 Mag, the 357 Mag has a significantly smaller bullet diameter. If you’re looking for something that can store more gun powder, precise shot placement, and handle more pressure when fired, you will want to look no farther than the 44 Magnum.

As you might expect, the two cartridges will have vastly different ballistic and terminal characteristics. Because of the larger neck diameter, the 44 Mag can hold bullets with a far higher grain weight than the.357 Mag. It includes multiple rounds of ammunition for each caliber.

What Is the Best Application for Both?

While a lot depends on the bullet caliber, the 44 mags will provide more assurance as a trail gun than the 357. If you’re hunting bears or other animals in the woods, a 44 Magnum with a heavy bullet load is your best bet. 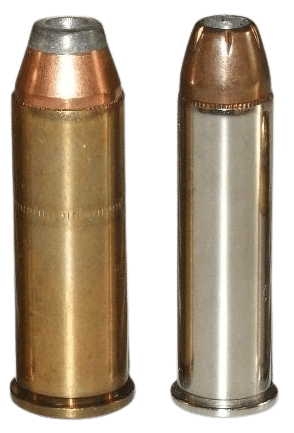 The bullet was first made as a revolver cartridge for hunting. As the inventor of the high-pressure round, Keith has long practiced hot-loading the 44 S&W Special.

The 357 Magnum's performance specifications required Keith to develop a robust-caliber bullet capable of achieving those standards. Although the 357 Mag's bullet was smaller than those of the larger calibers of the day, such as the .45ACP and .44 Special, it was faster and more powerful.

In the end, Keith had success with the 44 Mag. This large-caliber ammo could now reach supersonic speeds and generate immense stopping power. 44 Mag bullets can kill any large wildlife in North America in close quarters.

Which Firearms Can Use a 44 Magnum Bullet?

Many weapons are available from gun manufacturers that can fire the 44 Magnum round. Bolt action, lever action, and semi-automatic rifles are all included in this grouping.

Hunting enthusiasts have applied them to remarkable effect for a medium-sized game like deer and wild hogs. In many ways, shooting a 30-30 lever-action rifle is like shooting one of these. 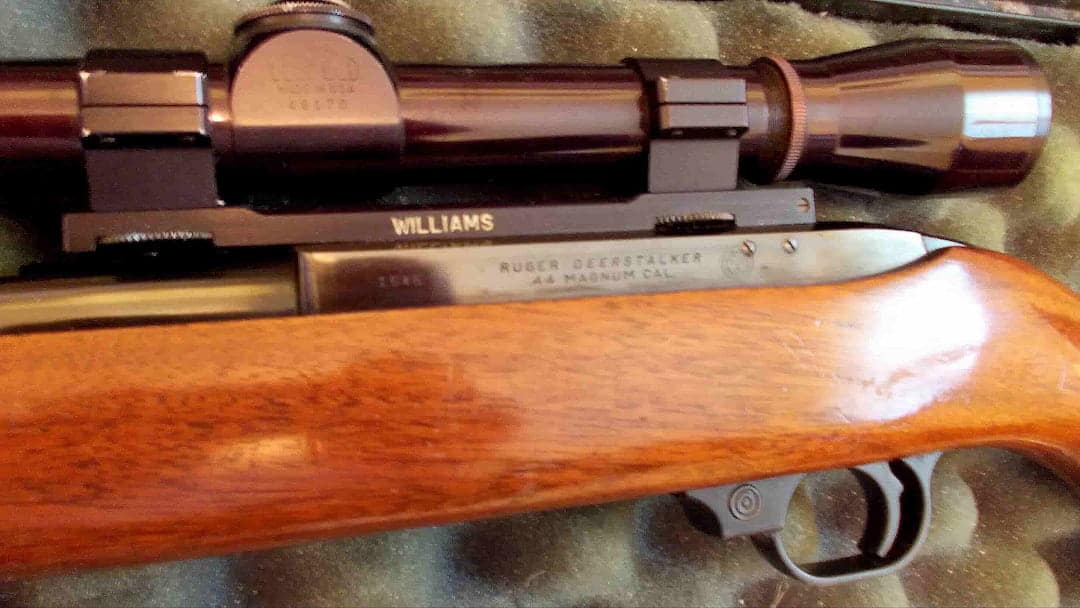 Black bear and Cape buffalo are examples of the big game successfully hunted with the 44 Mag. Many big game hunters have also used the bullets to protect themselves against polar bears and elephants. Especially when hunting in risky wildlife game areas, it's the ideal firearm cartridge for many hunters, even when using a rifle.

What Are Other Applications for a 44 Magnum?

You can use a 44 Mag for home defense, self protection or military applications besides hunting. Although security and police can carry a 44 Magnum-caliber pistol, police departments rarely issue it as a standard sidearm.

It's significant recoil and muzzle energy. With the potential for over-penetration, this combination isn't the best option for all law enforcement professionals.

44 Remington Magnum ammunition is not 44 caliber ammunition, unlike most American ammunition. It is actually between.429 and.430 inches long.

When the 44 Russian and 44 American ammunition were first developed, the outside of the cartridge casing was how they measured caliber sizes. 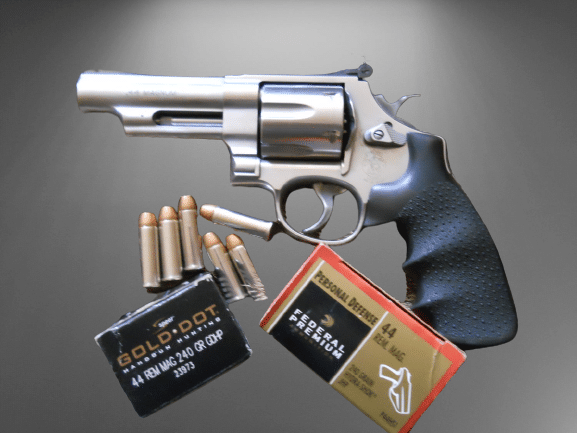 S&W used the same ammunition name for marketing when developing the 44 Special and the 44 Magnum. It doesn’t matter that the calibration of modern ammunition is by projectile diameter rather than the casing diameter. They decided that rather than marketing a new caliber size, they would stick with the one that had been in use since the mid-1800s.

The 44 Magnum goes on various terms. Some names are correct, while others are incorrect. Among the most common terms are:

It’s best to note that the.44 Magnum and the.44 Special are both interchangeable terms.

It's common for people to frequently refer to the cartridge without the decimals.

The fundamental meaning of these phrases has not changed.

The decimal point is essential since the number relates to a definite measurement in this circumstance .44 inch.

The 44 Remington Magnum is an American favorite, whether because of its pop icon status or for accuracy and power. For decades, the 44 Magnum has been the most popular caliber in the Americas, despite its humble beginnings as a reload.

While initially designed for revolvers, people have used the powerful 44 Magnum cartridge in various firearms. Semi-automatic carbines were first on the market in the 1960s.

The Ruger Model 44 carbine was the debut long gun for the company. In 1961, a semi-automatic carbine chambered for the 44 Magnum was launched.

44 Magnum Application in the Vietnam War

During the Vietnam War, the United States Army developed a revolver known as the “Quiet Special Purpose Revolver” (QSPR). Tunnel rat warriors carried a 44 Magnum round pistol while probing the tunnels of the Viet Cong.

The revolver was a redesigned Model 29 with a 1.3-inch barrel and an inbuilt suppressor that kept the firing noise below 110 decibels. The lower decibel level enabled the soldiers to shoot inside the tunnels without causing severe pain to the shooter.

Since it was light, the QSPR was a dangerous weapon, especially at close range. On contact, each of the 15 tungsten balls in the Army’s shotshell cartridges splattered over the target.

The Desert Eagle, a semi-automatic 44 Magnum handgun, became a pop icon when Playboy magazine, alongside Pamela Anderson, featured it on its cover in the 1980s. Although most people associate the Desert Eagle with 50 AE ammo, it’s also available in 44 Magnum. 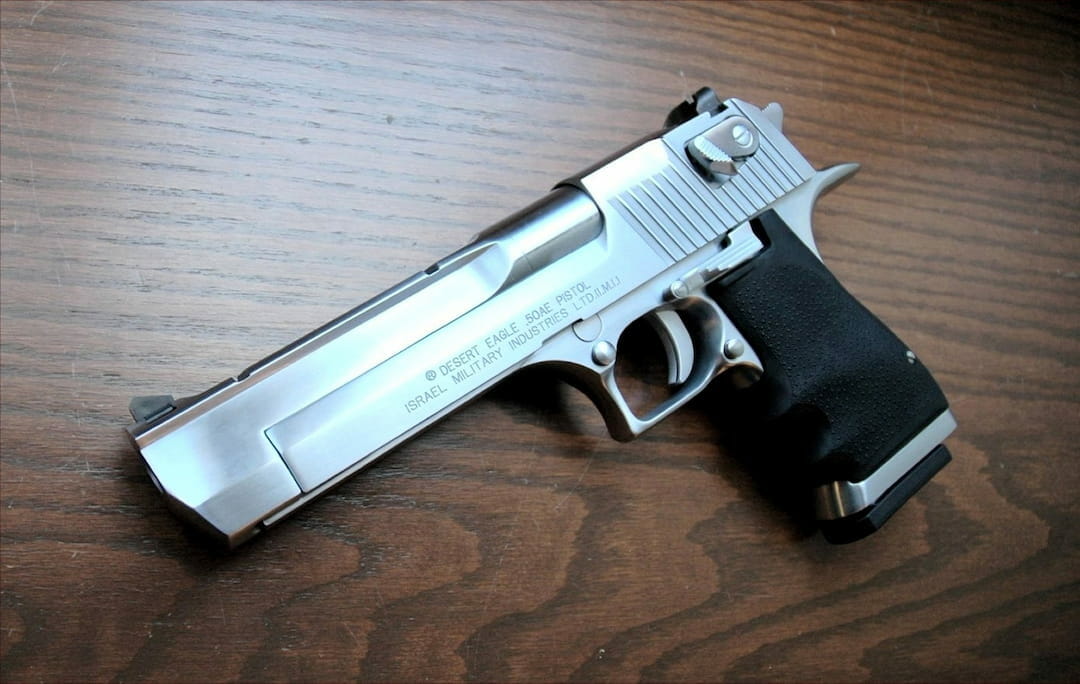 With their longer barrel length, rifles can maximize the ballistic performance of any cartridge. More accurate and simpler to use, a rifle or carbine cartridge chambered for a specific revolver, like the 44 Magnum, will consistently outperform its revolver counterpart.

Here is why: The.44 Magnum has long been one of the most powerful and adaptable revolver cartridges available.