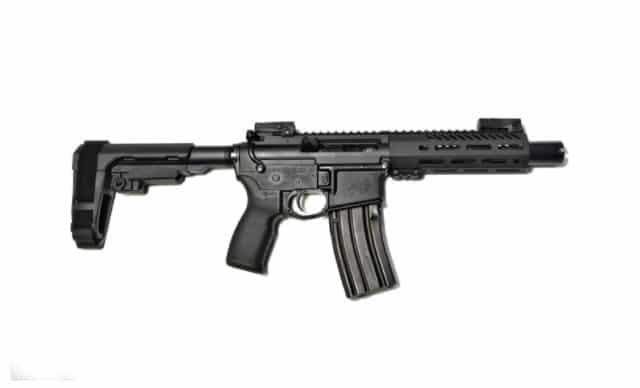 Racking your brain trying to decide whether to invest in an AR pistol or rifle? It can be a grueling exercise trying to determine the best gun for your needs. That's why I've decided to break it down into simple terms so you can easily understand the pros and cons of both.

Here, you will learn what makes an AR 15 pistol and short-barrel rifle (SBR) so different from one another. My hope is that this makes it much easier for you to decide which gun is right for your needs. It's important to note that buying an SBR will require you to get a $200 tax stamp. This alone has swayed many gun owners in the direction of the AR pistol.

Which Is Better: AR Pistol vs Rifle?

Let's first look at the differences between these two guns to help you decide what the best AR pistol is for your needs. An AR-15 pistol is simply an AR-15 that has a pistol barrel that is shorter than 16 inches in length. What's more, an AR-15 pistol doesn't have a stock (although a pistol brace is optional).
As such, it's overall length is shorter than 26 inches. It is the lack of a stock that defines the AR pistol as being a pistol. Take, for example, a Ruger SR-556 Takedown review.
If you were to build an AR pistol by equipping an AR-15 platform, regardless of the caliber, with a stock and barrel that is shorter than 16 inches, it would become a short-barreled rifle (SBR). A short-barreled rifle is legal to own in most states. 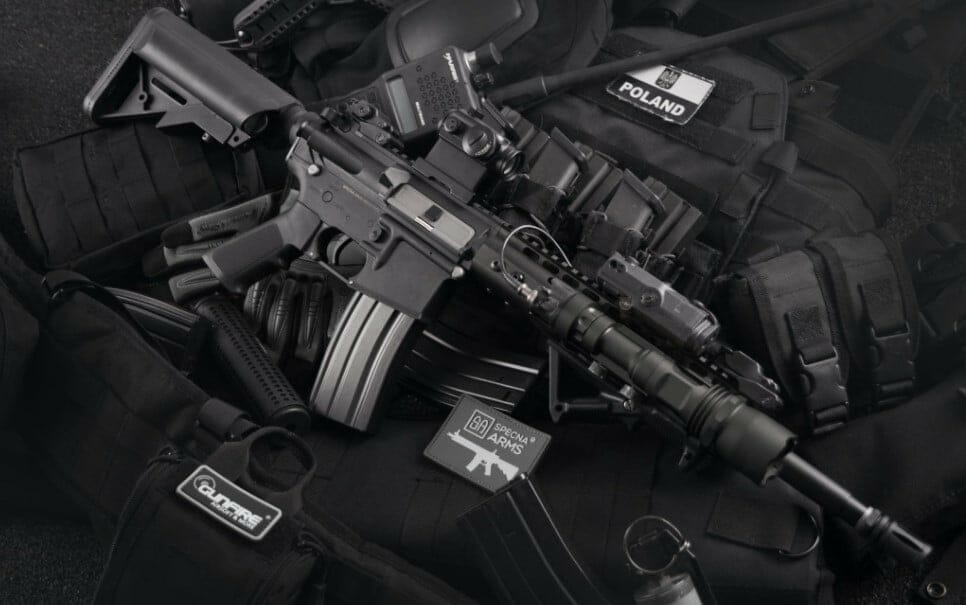 However, as mentioned above, you would need to register the weapon as an NFA firearm as per the National Firearms Act (NFA) and pay for a tax stamp to the tune of $200. NFA items include weapons like an SBR, explosives, and even a suppressor (and yes, the tax stamp on a suppressor is still $200).

The great thing about AR pistols that is so compelling to gun owners is the fact that you don't have to go through the same process as owning a short-barreled rifle. That means you don't have to register your gun with the NFA or pay a $200 tax stamp.

It's also important to mention that some states prohibit owning SBRs, regardless of the NFA's federal regulations. As such, some owners have no other recourse but to settle for AR-15 pistols.

Looking at an AR pistol, they have all the makings of a rifle. Ammo is fed through rifle magazines and the construction resembles that of a rifle. However, because it is missing a rifle stock and has a shorter barrel, it is classified as a pistol.

One of the biggest benefits of the standard AR platform is that of the adjustable rifle stock. While it's true that all rifles don’t have this feature, it is considered standard due to this configuration. Even if yours doesn't have it, you can easily convert it into such.

To be a rifle, it must have a barrel of at least 16 inches. And when you factor in how long the receiver is, regardless of what you do with the stock, you have a gun that is over 24 inches long.

Most collapsible stocks measure about 7 ½ inches when they are fully collapsed. And if the muzzle isn’t permanently affixed, you will need to add about another two inches. This is because a removable brake or flash hider doesn't count toward the length of the 16-inch barrel.

Therefore, if you add all that up, you'll come up with a minimum overall rifle length of around 34 inches. And that's when it is in its most compact form. If the stock is fully extended, you'll need to add about 4 more inches to the total measurement.

There’s certainly nothing wrong with this size. This is a rifle we're talking about here. It's meant to be a bigger weapon so that it can produce greater velocity and hit targets from afar.

But when talking about an AR pistol, there is no minimum requirement for how long the barrel length is. As such, you don't have to go through the same ATF hoops as outlined above just to own an SBR. This makes the pistol a much more appealing choice for many owners.

You can freely buy and use your AR pistol and not have to deal with the ATF delays that are typical with NFA firearms. Because of the federal gun laws in place, there is usually a lengthy waiting period to get approval to own an SBR.

Are AR Pistols Worth Buying?

Here's the thing. A lot of gun owners believe that the AR pistol exists solely as a loophole for those who can't legally own an SBR in their state. Or, as a workaround for the $200 tax stamp and ATF approval delays mentioned above.

Instead of having a rifle stock and pushing it into rifle territory, an AR pistol can utilize a pistol brace instead. However, these aren't necessary components and it's entirely up to the owner as to whether to have a pistol brace.

All that aside, an AR 15 rifle isn't likely something you're going to want in favor of an SBR, especially if you're hunting. ARs are certainly a blast to use, but they don't have the stopping power found in an SBR. If you're an avid hunter and you can legally own an SBR, get an SBR.

Sure, you will likely have to wait a while for ATF approval, but at least you will have a weapon designed for hunting. Furthermore, if you're looking to invest in either weapon for home defense, you're going to want to stick with an SBR.

Can You Legally Carry an AR Pistol?

In terms of concealed carry, neither firearm is even close to ideal for such use. With that being said, gun laws dictate that you can indeed use an AR pistol as a concealed carry weapon. How hidden will this weapon really be, though?
People will clearly know that you're carrying it. The only way you could get away with it is if you had a specialized bag. But that's the problem. Most people are going to know what you have. The legality of it aside, is this really a weapon you're going to need to have with you on a daily basis?
If you want a personal defense weapon, make use of a handgun or revolver. They are much easier to shoot in a pinch and most importantly, they aren't as noticeable.
Pistol BracesIf you are committed to carrying your AR on your person, you may want to avoid pistol braces. Most people are going for size and would prefer their guns be easy to manage. Braces, while not illegal, do add a few inches to the overall measurement of the weapon.
You can make use of your AR just fine without braces and you'll still get relatively good accuracy. From my testing at the range, I didn't notice a whole lot of difference with or without a pistol brace. Adding a red dot certainly helps matters, but you can avoid the pistol brace and be just fine. 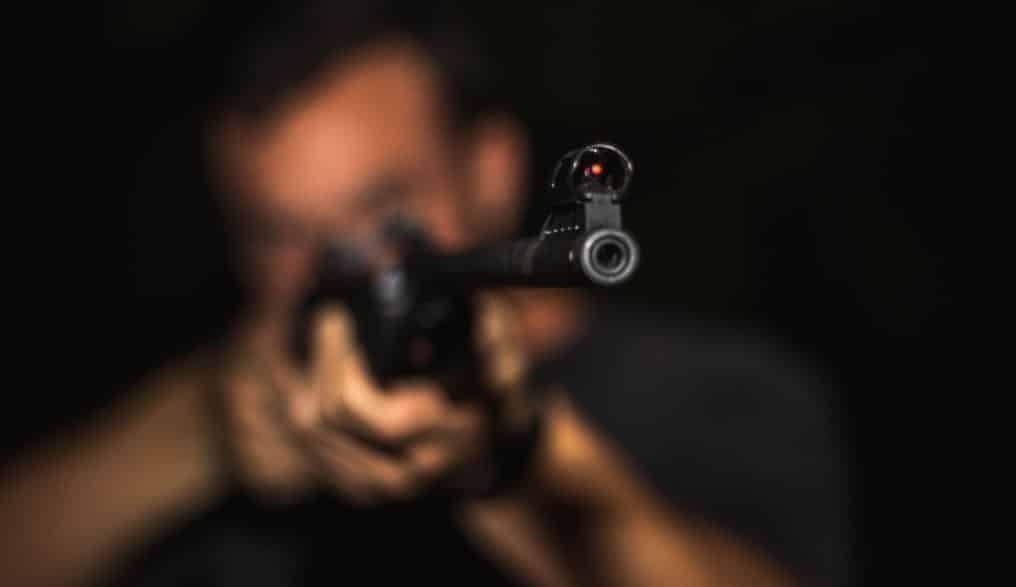 AR at the Range

Some who shoot the AR pistol may find that there is a difference in using a pistol brace, but I just didn't see it. With that being said, it's widely different from firing traditional rifles. An AR is a fun little novelty, to be sure.

Obviously, it's up to the shooter as to what they prefer to get out of a firearm. If you want a tactical advantage, there's no doubt that rifles will do the trick. That said, ARs have an excellent foregrip and feel good in your hands.

I'm all about a good grip, and you can't deny how good an AR feels. The recoil is manageable, although it's not meant for shouldering. And although it isn't the most tactical shoulder weaponry on the market, I had no issues stabilizing it when unloading each round.

The build quality is solid throughout, and I find it interesting that you can build the AR-15 to support 300 Blackout rounds. And although you can fire 5 56 round ammo, it isn't advised due to the heat produced.

So, what's the bottom line? The big difference between these two is the fact that a short barreled rifle has a buttstock. An AR pistol does not. As mentioned, ARs aren't meant to be fired from your shoulder. An SBR, of course, is. Shouldering an SBR feels natural and is one of the best ways to shoot it.

You wouldn't want to fire an AR while shouldering it. These just aren't shoulder weapons. The best thing to do is buy yourself a brace like I mentioned above.

The other big difference here is that you have to jump through legal ATF hoops in order to own an SBR. The laws surrounding this one make it a bit of a hassle to own, whereas you don't have to worry about such inconveniences with an AR pistol.