Gun laws are changing all the time. One of the biggest changes to come along in recent history has to do with whether it is legal to shoulder an AR pistol. As you will learn today, there was a lot of back and forth between the ATF and gun owners.

What was once deemed illegal by ATF law would see some justice thanks to the outcry from the public. I'll show you what happened leading up to the decision to make shouldering an AR illegal, and the changes that took place to make it legal once again. You're in for quite the ride. Check out how the NY state and the City have made their NY gun laws one of the toughest in the US.

Is It Legal to Shoulder an AR15 Pistol?

If you've read any of my AR pistol reviews, you have a pretty good idea as to what constitutes an NFA weapon and what doesn't. As it stands, an AR pistol is not an NFA item. But what would make it one is if you were illegally shouldering a pistol. Let me explain.
Back in 2014, the ATF tried to say it was illegal to do so. However, they reversed their decision in 2017. So now, incidental, sporadic, or situational shouldering is deemed legal to do when you shoulder a pistol brace.
How did it get to this? Well, back in 2012, Sig Sauer released the SB-15 stabilizing brace. The SB-15 stabilizing brace is what caused the debate to begin with. The idea was to strap this brace around your forearm. However, people started removing the arm strap, thus using the pistol brace like a buttstock.
In doing so, this gave you similar effects like you get using a traditional stock. As such, the ATF came forward and said that doing this would cause your AR to become an SBR. This is illegal to do so.
The ATF statement in the matter read as follows: "Consequently, the attachment of the SB-15 brace to an AR-type pistol alone; would not change the classification of the pistol to an SBR.
"However, if this device, unmodified or modified is assembled to a pistol and used as a shoulder stock, thus designing or redesigning or making or remaking of a weapon design to be fired from the shoulder; this assembly constitutes the making of a 'rifle' as defined in 18 U.S.C. Section 921(a)(7)."Further, in the designing or redesigning or making or remaking of a weapon designed to be fired from the shoulder, which incorporates a barrel length of less than 16 inches; this assembly constitutes the making of "a rifle having a barrel or barrels of less than 16 inches in length"; an NFA firearm as defined in 26 U.S.C., Section 5845(a)(3).
"What ultimately happened was the ATF said that you can go ahead and use a pistol brace, you just can't use it for shouldering. If you were to shoulder it, doing so would illegally cause your pistol to be redesigned into a rifle with a barrel that is shorter than 16 inches.

That means it is now an illegal SBR since you didn't pay for the tax stamp and file the necessary ATF paperwork to have it legally registered as such. Dizzying, I know. But that's the law according to the ATF itself.

But wait, there's more. In January 2015, the ATF refused to back down on its stance on the shouldering using braces. Letters began to pour into the ATF on the matter, creating a firestorm from angry gun owners.

Around this time, letters were coming in by the truckload arguing for shouldering using braces. It became hard for the ATF to justify their reasoning, as detractors argued that just using a weapon differently than it was intended was grounds for the change.

The ATF heard the cries of the many and decided to listen to reason. This is a pivotal moment, as the ATF is pretty strict in their rules and regulations.

Finally, the ATF relented, allowing AR owners to once again legally shoulder using braces. So yes, it is legal to do so now according to the ATF. You just don't want to broadcast it to the world. If it ain't broke, don't fix it, out of sight out of mind, and all that jazz.

Can I Put a Stock on an AR Pistol?

Using an actual stock on an AR pistol would turn your pistol into an SBR. So no, you wouldn't want to put a stock on your AR unless you're willing to fill out ATF Form 1 and go through the same channels to register an NFA firearm.

Remember, your AR constitutes a pistol because it can be fired with one hand. While I'm not a fan of this method (more on that in a moment), it can be done. Any modifications that extend the overall length of your AR to 27 inches would mean you'd have to deal with the ATF and pay a $200 tax stamp.

If you're trying to avoid dealing with the ATF, it's best to not shoulder a pistol brace instead and call it a day. An arm brace will provide similar (but not the same) stability that you see from a rifle.

The ATF has a lot of people applying for different things and can take up to a year before you are approved. As such, you should think long and hard about turning your AR into an SBR.

Furthermore, you want to keep in mind that owning an SBR is prohibited in some states. You will want to thoroughly examine your local weapon laws before investing in the redesign of your AR. It may make more sense to leave it unmodified so you don't run into any issues.

Can You Shoulder an AR Pistol?

If you're wondering can you shoulder an AR pistol, the answer is technically no. However, you can use a brace as a shoulder stock in its place, giving you some leeway in how you shoot your AR pistol. During my experience with AR pistols, I found them to be a weapon that you definitely don't want to use as a shoulder weapon. 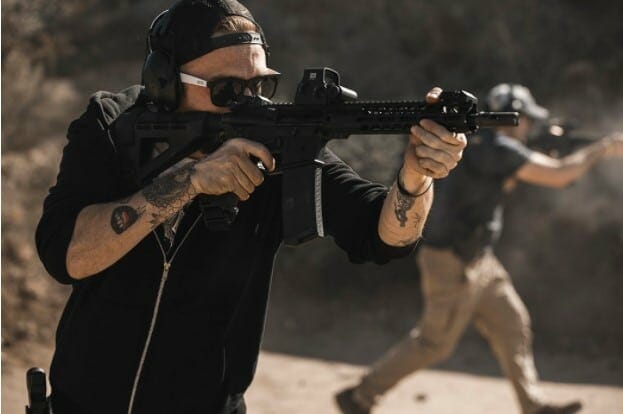 It just isn't comfortable and you don't gain much of a tactical advantage in doing so, brace or otherwise. If you want a shoulder weapon, a short-barreled rifle will serve you much better. This one is made to be shouldered and it feels completely natural firing it as such.

If you were to shoulder an AR 15 pistol, I would need to be with a pistol brace. An arm brace provides the support and stabilization you're looking for, making for a much safer shooting experience. With a stabilizing brace, you will find that you have much more control over your weapon.

Many people like to shoot the AR pistol one-handed. Personally, I wasn't a big fan of this method. When I fire a gun, I want to have complete control over it. I just didn't feel that at the range when I used one hand.

Even with the arm brace, which I could use as a stock, it just didn't provide the kind of shooting I had hoped for. The AR pistol is a unique weapon, to be sure. When used correctly, it feels much more natural, at least that was my interpretation.
Your shooting experience may differ and your interpretation may be much different than mine. It's best to spend some time at the range with an AR 15 pistol if you have a chance so you can see what you think of it.
If you're determined to shoulder an AR pistol, be sure to use a pistol brace. When you shoulder a pistol stabilizing brace, you'll find a closer experience to that of a short-barreled rifle. It's still a far cry from using a legitimate stock, but you may find that it provides the support and stabilization you need. 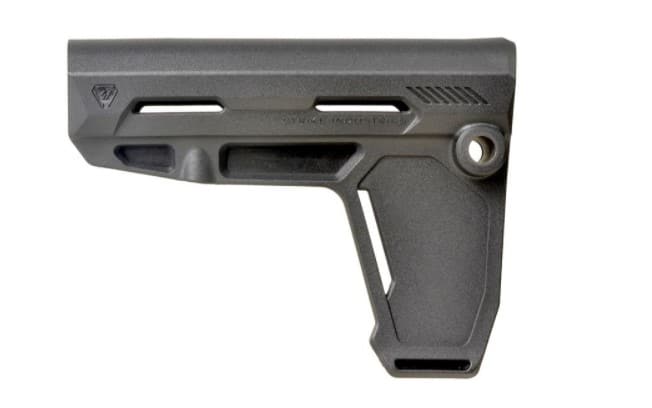 Can You Legally Carry an AR Pistol?

Absolutely. Since an AR is considered a pistol, federal law dictates that you can indeed carry it around as a concealed weapon. Since the laws say it's perfectly legal to use your AR as a concealed carry, you shouldn't have any issues in doing so.

Can I Carry an AR Pistol in My Car?

Of course, if you have a concealed carry license, you can legally keep your AR loaded while it is in your vehicle.