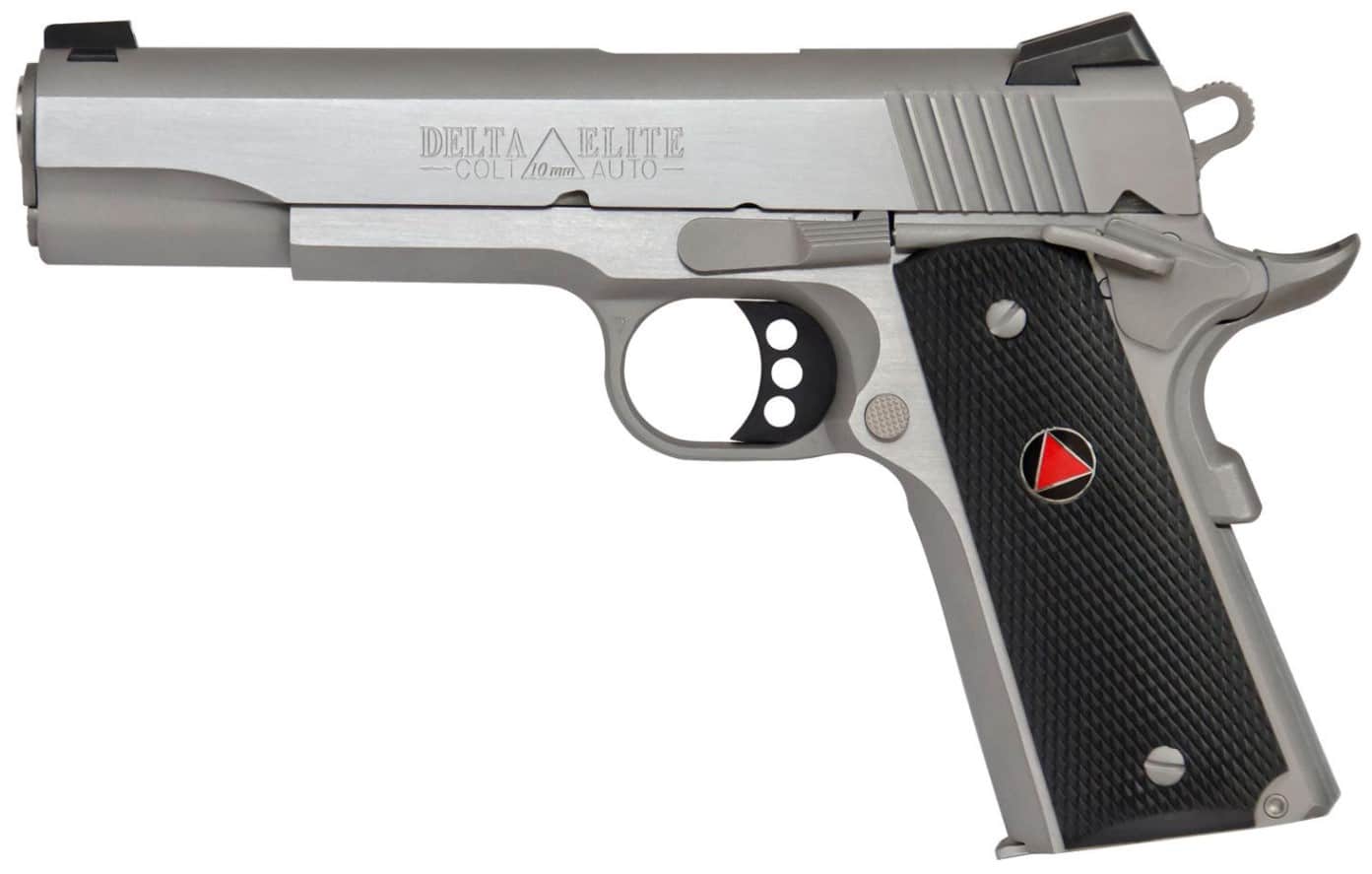 Whether you're considering buying a new handgun for personal use or home defense, power is likely at the top of your list of wants. And if you want a pistol that you can carry on your person, size is certain to be up there, as well. So, how can you get power without having to lug around heavy artillery? That's where 10mm comes into the picture. As you soon learn in this review, Colt Delta Elite is a special entry that is definitely worth a look.

But is it ideal for concealed carry? I'll answer that in this article and much more, but maybe you'll want to check out the best 380 pistols, as well. Those of you looking for power and reliability will be pleased to know that Colt is on top of their game with the Delta Elite. If you're wanting to make a sound investment (and who isn't?), you will find that the Colt Delta Elite has a lot to offer.

If you're familiar with the .40 S&W cartridge, notably the Springfield EMP Champion, you will feel right at home with the Colt Delta Elite. In fact, you would be forgiven for confusing the two at a distance. Only the two-tone grip and stainless frame really give away their differentiation.

Built on the Series 80 design, the Colt Delta Elite is a stunning work of craftsmanship. But before we explore why it scored so well in our 10mm pistols reviews, let's take a moment to study its specs.

It's interesting to note that there were some 12 variations of the Delta Elite over the years, with this being the latest. Some were made of carbon steel, had various sight setups, and so on. I even learned that at one time, parts were available so as to allow the Delta Elite to shoot .40 S&W.

Out of all of the different variants made throughout the years, I find that I prefer the current stainless steel model. As a 10mm 1911, the Colt Delta Elite is a great addition to the lineup. While the previous iterations were certainly good, there's something truly special about the 10mm 1911.

If you have been following my recent reviews on 10mm pistols, you will remember that the prices thus far have been pretty affordable. The Colt Delta Elite breaks that trend with one that is a bit higher in price. Is it worth the extra scratch? Let's find out!

One of the bigger issues to come out of the earlier versions of the Delta Elite was its slide rail. After repeated shooting, the slide rail (by the slide stop cutout) and frame would develop cracks from the stress. Not a good look. Fortunately, this was remedied by reducing part of the metal cutout, allowing the frame to absorb more recoil.
This was an issue back in the '80s when Dornaus & Dixon's Bren Ten was the only real competition for Colt. To be fair, The Bren Ten only lasted for three years, due in large part to its own problems. Still, Colt had to act fast and resolve their recoil issue. Which, thankfully, they did. But one has to wonder if the fate of the Bren Ten wouldn't have come so soon if Colt neglected to address their frame and slide cracking under pressure.
In any event, Colt still manufactures the Delta Elite in the manner mentioned above. By leaving out part of the cutout, the Delta Elite is able to provide the excellent shooting experience that it's known for to this day.
Another common issue among the 1911 and .45 ACP is the need for shock buffers. In fact, many shooters have been using shock buffers with .45 ACP handguns for years. For those who are unaware, shock buffers are small poly-fiber molds that some shooters use with pistols that are prone to frame issues - like the one found in early variations of the Delta Elite.
Should you use one with the latest Delta Elite? From my testing, it doesn't appear to be an issue. However, you certainly wouldn't be doing any harm in using them. Shock buffers are really inexpensive, so it's not like you're going to be out a lot of money by investing in and using them.

Their application is pretty straightforward. You simply use a shock buffer on your pistol until it becomes worn down, at which point you swap it out for a new one. To do this, you first need to take the recoil spring off of its guide rod. Once off, you just slide the shock buffer onto the guide rod and slide it all the way back.

Then, replace the spring and put it back into place. This will help reduce any possible stress to your slide and frame due to recoil when shooting. Again, you can pick up shock buffers for next to nothing, and you won't be doing any harm to your pistol by using them.

As a brief aside to this article, for whatever reason, Colt decided to opt for plastic when making their guide rods. I think most of us can agree that metal is the preferred material of choice for guide rods. The only reason I can surmise as to why Colt would use plastic is to allow for some flex to absorb recoil and prevent stress in the gun itself.

It should be noted that this isn't any ordinary plastic. It's actually a medical-grade compound that is highly durable and long-lasting. But if you're still leery about your guide rod being made of plastic, it isn't difficult to get a metal one and swap it out.

Of course, when you take into account the robust two-spring configuration that Colt uses in the Delta Elite, stress isn't really something you have to worry about. You can safely fire 200-grain 10mm cartridge rounds without issue. The slide can be a bear to rack, but at least you know you're working with some stout hardware.

Right at Home on the Range

As I mentioned in the open of the article, if you've had experience with Springfield's EMP Champion, you will feel right at home shooting the 10mm Delta Elite. It's a robust pistol, to be sure. But as long as you're comfortable shooting a 10mm round, you aren't likely to have any issues with the Delta.

Thanks to the beavertail grip, you needn't worry about any recoil bite. Beginners may want to start out with a gun that isn't quite so beefy, but seasoned shooters should get acclimated pretty quickly.

I shot 200-grain 10mm round loads at 25 yards and was pleased with how well it handled. The rubber grips go a long way in providing a secure shooting experience. I appreciate the positioning of the thumb safety, too, as it's easy to access and helps to facilitate a good grip when firing.

I can't say enough good things about the grip. The checkered design provides tight control, which I like. I never had any trouble with the Delta Elite, as its slide is well-designed and allows for easy, albeit stiff, manual operation.

The sights are equally great, featuring dovetail mounting in the slide. Those shooting in dim lighting will appreciate the white dot setup, as I found it to help considerably when shooting in the evening.

The grip safety has a welcome speed bump that I'm sure many gun owners will appreciate. Firing with a 10mm cartridge is also a welcome change that never gets old. If you're looking for serious stopping power, the Colt Delta Elite delivers the goods.

This is a serious gun for the serious gun owner. If you aren't yet comfortable with .40 S&W or 10mm rounds, I would recommend stepping down to a .380 or 9mm and getting in your shooting that way. This is a pretty hefty gun and needs to be approached with plenty of experience first.

While I've had limited time with a Series 80 gun, I have spent ample time with many 10mm pistols. And this makes a great deal of difference for anyone interested in the 10mm Delta Elite.

Bottom line: never use a pistol that's out of your personal comfort zone. You should first get to where you are comfortable with "lesser" models and work your way up from there. This is a good rule for any gun owner and will ensure that you are well-versed in the necessary protocol before branching out to newer heights.

Being a Series 80, the Delta Elite has some auto safety changes from the Series 70. One of those being a firing pin lock. As such, the firing pin won't engage until the trigger is pressed. I found this to work just fine and never had any issues with it.

These kinds of changes are sure to bother some gun owners, but I don't have any problem with them. Again, the firing spring lock is simply an added safety feature that some would argue is a much-needed addition.

For one thing, this pistol is absolutely beautiful. The two-tone style does a lot for me, personally. Combined with the stainless steel construction, you're getting a remarkable looking gun. And although it does indeed bear a close resemblance to the Springfield EMP Champion, I think I like Colt's Delta even more.
It's a great-looking gun, to be sure. It loads like a champ and I enjoyed firing each and every round. I like that Colt made this gun better than the last, as they seem to improve with each variation. Although some of those older models sported a barrel without a bushing, this barrel is most excellent, as is the rest of the gun.
The double recoil spring is a nice touch that ensures you are investing in a high-quality pistol that is sure to stand the test of time. As you can likely tell from this article, I wasn't able to find anything other than the slightly higher price that would set this gun back.
And even then, the price isn't even in the equation when it comes to the quality of the gun. You're getting a lot of power here thanks to the 10mm ammo. Every shot I fired was better than the last, and I like the weight and feel of the trigger. At first, I wasn't sure what to expect. The last two 10mm guns I shot had varying complaints about the trigger.
But I'm pleased to report that I have yet to speak with anyone who doesn't like this one. First of all, its aluminum body feels really good. And two, the skeletonized construction adds to its ease of use.
The grips are most excellent and don't get in the way one bit. In fact, I found them to add the perfect amount of girth to the handle. Firing each round felt natural and precise.
As a 10mm gun with a 5-inch barrel, this might not be the best choice for a concealed carry. It's a full-size pistol and is going to take some serious dedication if you are adamant about making it your daily carry. I advise that you at least put it in a shoulder strap and haul it that way, along with your ammo.

As a full-size 10mm, you're getting a lot of gun here. I like that this two-tone beauty is classy and elegant. It's sure to make a standout addition to any arsenal. I had a lot of fun firing the 10mm ammo, but as always, you have to ask yourself if 10mm is necessary for your needs.

If you're looking for a gun to take with you hunting, 10mm is certainly a necessity. The same is understandable for home defense. But as a personal carry, you might want to look for something a bit more compact and a little less powerful.

That said, if you want a 10mm and are willing to haul this beast around, that's completely your prerogative and right. Regardless of its application, though, you are sure to like Colt's Delta Elite. It's looks and feels like a quality handgun should and performs just as well.