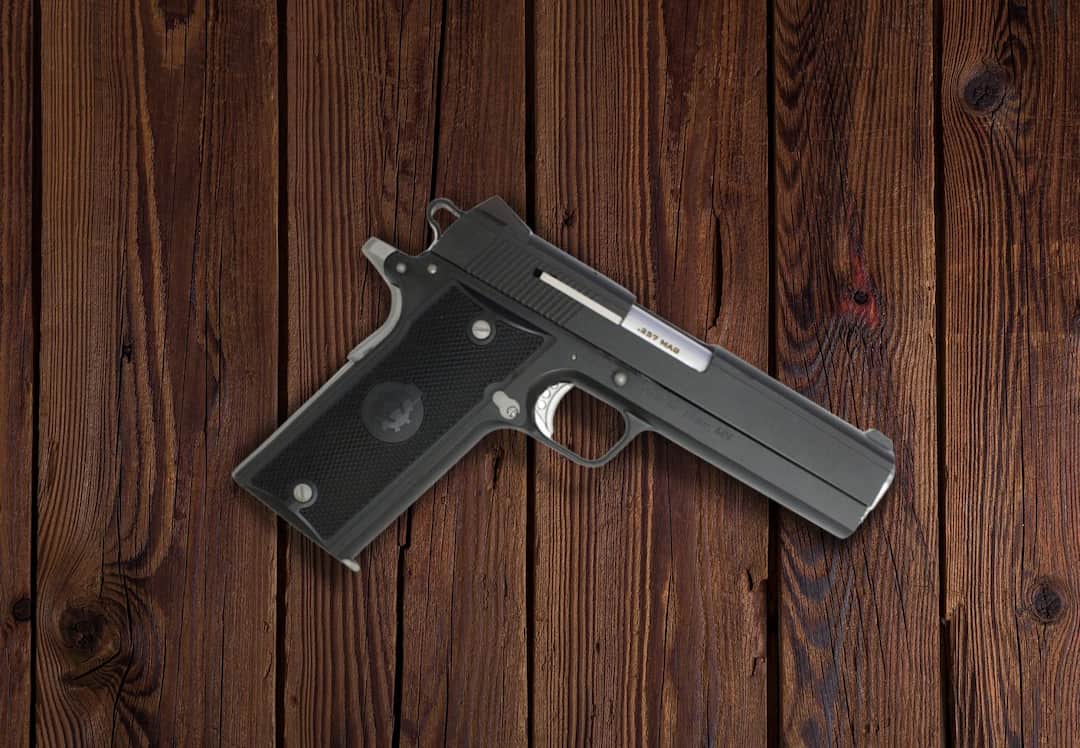 The Coonan 357 Magnum 1911 has a good reputation for accuracy and reliability. This gun is a bit pricey because it's handmade for silhouette and accuracy shooting. Let's look closely at the 357 magnums focusing on the Coonan 357 Classic 1911 Black.

In this Coonan 357 magnum 1911 review, we'll see the shooting experience, the problems we had while at the shooting range, the pros and cons, and much more.

I liked the Coonan compact self-loader in full power because it featured excellent ballistics in the gunfire range. The Coonan classic ballistics are ideal for personal defense, redactional shooting, and hunting.

The gun had excellent loading, penetration, and wound potential with the 125-grain dot-357 Magnum. The problem with that load was it took a toll on the smaller revolver parts and kicked a lot. However, the Coonan classic accommodates 357 magnum cartridges reliably and accurately. 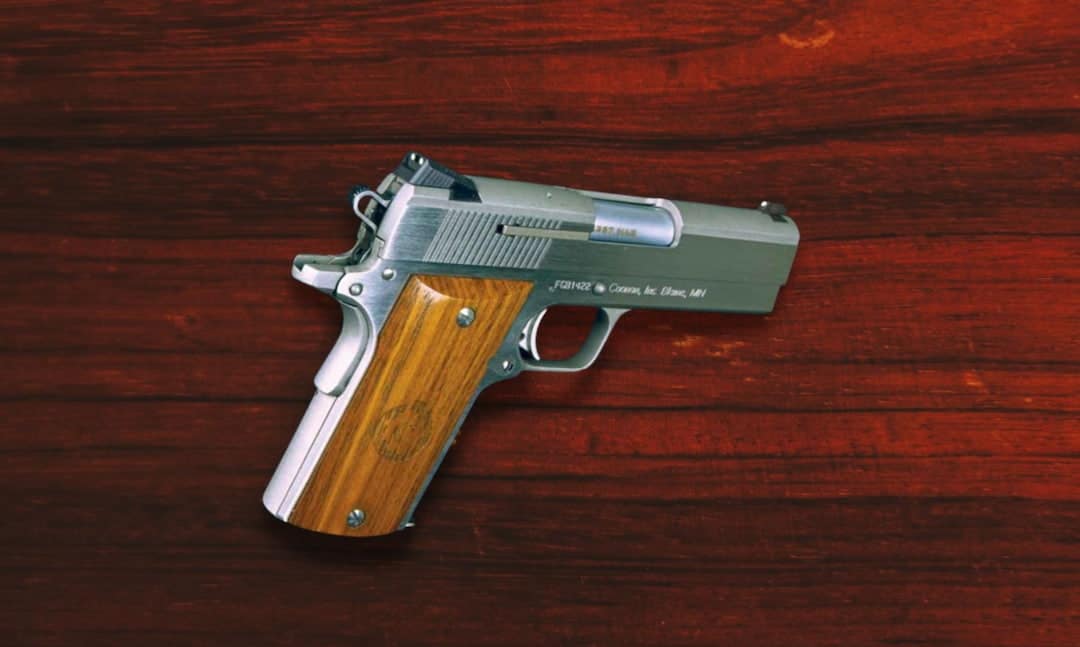 The Coonan Classic 357 has crisp 1911 controls, a magazine release, thumb safety, and a slide lock.

The gun's grip, grip safety, and sight picture supplemented the controls well. That's because the magazine has seven cartridges that give it a broad grip. It has a three-dot sight system with two dots for the rear sight and one for the front sight.

When you depress the grip safety, it releases its trigger hold midway through its travel, and its trigger hinges like a browning hi-power.

The gun had a long port for ejection, which made fast-changing of the magazine at the gunfire range.

The gun wielded impressive velocity, higher than I expected. It's because of the 5-inch barrel without a cylinder-barrel gap. I liked the increased velocity because it made the experience with this gun different from the typical revolver.

This gun is five ounces higher than the usual 1911 pistol. It goes a long way in mitigating recoil.

After extensive fire experience, I found the Coonan 1911 impressive with power, accuracy, and long-range ballistic reliability. The gun functioned well in a 25M yard using factory ammo, including 180-grain, 158-grain, and 125-grain.

We clocked 2-inch in the X-mark using five-shot groups.

Using the same bullet weight, the 357 Magnum showed higher velocity than the other 337 SIG capacity. And it almost outperformed the typical 357 magnum revolver with a six-inch barrel with the same loads and bullet weight. For instance, a standard 125-grain loading would break the 1250 fps of the 4-inch revolver. The 357 had a modest recoil in all velocities.

I also liked that the handgun was a fast-on-target when I made the first shot. But its recoil was not up to the 45 ACPs on the follow-up shots, which felt okay and bearable.

If you're willing to master it, the Coonan is a good handgun for personal defense and as a hunting gun because of its fast-handling design. You also only need to select an ideal holster.

How Many Rounds Does a Coonan 357 Hold?

The Coonan 357 holds eight rounds, made possible by the seven cartridges that make the magazine. The initial design has a well-made magazine as the core of the entire project. Coonan pistol production is limited because getting a rimmed cartridge to feed in a semi-automatic pistol has always been a rather tricky engineering task.

Is Coonan 357 Still Made? Packing The Power

There are only a few self-loading pistols out there chambered for rimmed cartridges. Coonan Classic 357 is one of them. 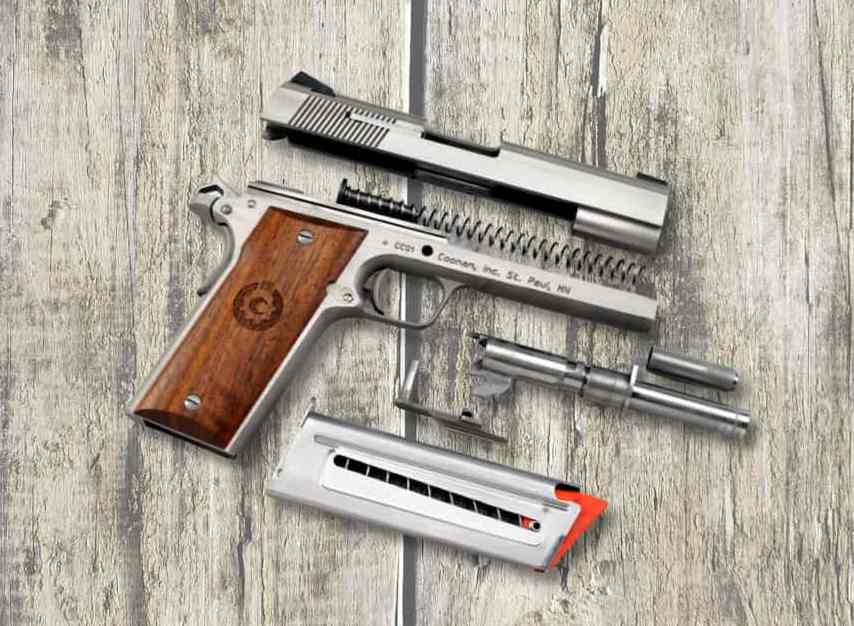 Also, a Coonan 1911 has the same controls but is larger to accommodate the longer cartridge. As a result, it has a larger circumference that smaller hands would struggle with unless they had prior experience firing 1911s.

In full power, the gun broke 1450 fps with 120 grain. And with a heavier charge with medium-burning powder, the gun quickly broke 1550 fps.

For hunters, the 180-grain cartridge load breaks 1200 fps, which makes it ideal for deer-sized handgun hunting.

So for boars, you can use a 180-grain load for deeper penetration. And for personal defense, the gun is fast-action, similar to the 45 magnums. But you must have good firearm practice and select the loads carefully. 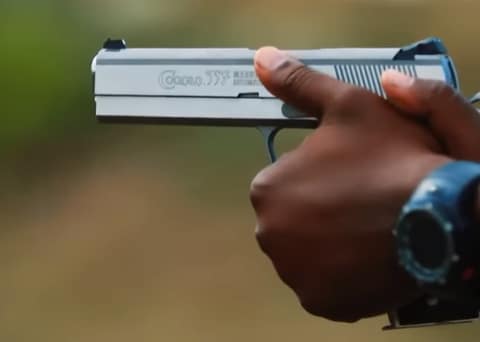 For hunters, the 180-grain cartridge load breaks 1200 fps, which makes it ideal for deer-sized handgun hunting. So for boars, you can use a 180-grain load for deeper penetration. And for personal defense, the gun is fast-action, similar to the 45 magnums. But you must have good firearm practice and select the loads carefully.

Where Are the Coonan Guns Made?

Coonan Arms Inc. makes Coonan 357 handguns in Minneapolis. You will not easily find these handguns in a gun store because they are engineered on order, and you'll have to wait 4-6 weeks before getting your price.

Amazingly, the gun is viable for concealed carry. The gun didn't feel that big and was comfortable to carry. Different holster makers are manufacturing discreet holsters that fit the Coonan classic.

Yes, the Coonan compact 357 is a reliable firearm. Coonan Inc designs the 357 Magnum with the ability to accommodate the 357 ammo cartridge. It does that accurately and reliably.

Will a 357 Magnum Stop a Grizzly Bear?

Yes, a 357 magnum can stop a grizzly bear. 357 magnum and other identical caliber loads only require a well-placed shot. However, that's not in alignment with the animal code unless it's in a life-or-death circumstance.