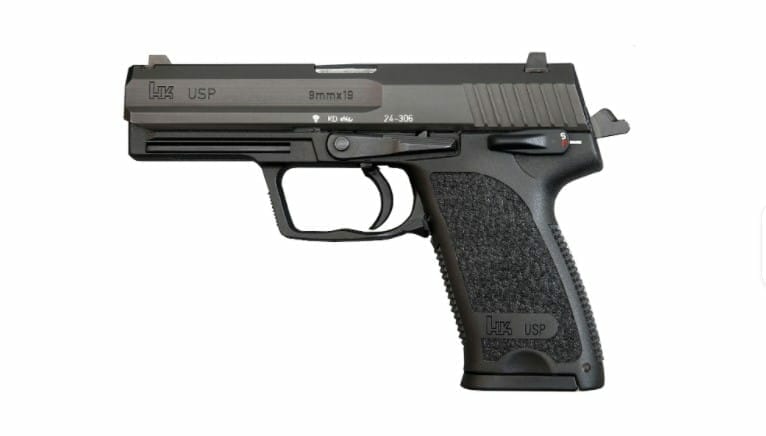 The Heckler & Koch USP (Universal Self-loading Pistol) is essentially the template that the MK 23 was built upon. First developed as a .40 S&W for the United States gun market, the USP was later released in 1993 alongside the .40 S&W version.

Then, about two years later, Heckler & Koch released a .45 ACP variant (USP 45). The firearm was originally designed for United States law enforcement, as well as commercial buyers. Since then, the USP has gained quite the following among international gun buyers. As you will soon discover, there’s a lot to like about the USP, but you should, nevertheless, check out all top concealed carry handguns, or other quality 9mm pistols out there.

Heckler Koch USP - Is It Worth the Money?

With such widespread use and acclaim, it's little wonder why the Heckler & Koch USP continues to be a respectable seller. As we will discuss in greater detail, there's a lot going for this polymer frame gun that makes it worthy of your consideration. And if you haven't had experience with pistols before, check out how it fares as your first handgun, compared to others.

Let's take a moment to talk about the overall design of the Heckler & Koch USP and the components that make up this pistol. But first, here are the specs for your research. 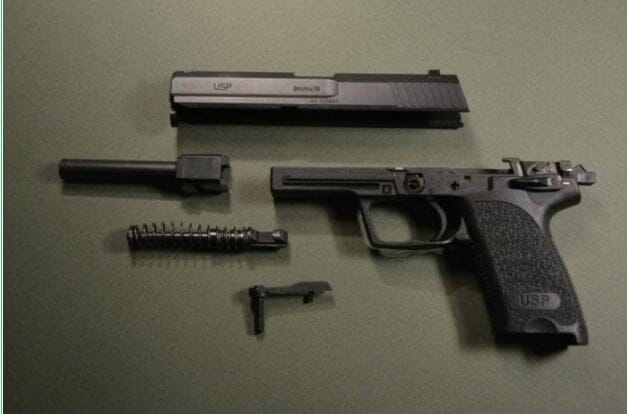 Upon firing the USP, it's easy to draw comparisons to a 1911 pistol. When you shoot the Heckler & Koch USP, the slide travels rearward as a result of the blowback the gun produces.

This also causes the barrel assembly to tilt upward while unlocking the chamber. You will find this system to be quite common among many of today's modern centerfire pistols.

Additionally, the USP compact has a substantially sloped breech. Modern USP barrels that were built after 1996 are designed with polygonal rifling that is very much similar to what is found on Glocks.

If you're unfamiliar with polygonal barrels, they are designed with having several cuts in the bore that form a spiral. The purpose of these cuts is to help grip the bullet as it travels out of the barrel. 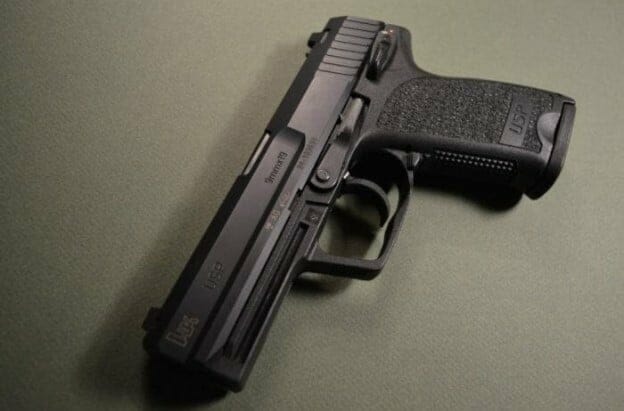 Whereas the traditional threaded O ring barrel designs serve to cut the bullet, the USP does not. Fans of polygonal rifling maintain that they last a lot longer and are much easier to clean compared to a traditional model.

It is also believed that a polygonal ring barrel makes a noticeable difference when firing, improving both the accuracy and velocity of the weapon. Tests have even shown that the Heckler & Koch USP is capable of clearing a squib round from a barrel after getting lodged inside. This was done after firing another round immediately afterward.

Perhaps even more impressive is the fact that the reports stated that the gun survived the test and had only minimal bulging in the barrel.

Cleaning the USP is indeed much easier compared to a lot of the other handguns I've cleaned. It is faster to do so, even if only slightly.

Furthermore, the USP is forged by a cold hammer. This serves to benefit the pistol in terms of durability and longevity.

It is advised to use caution when reloading with lead bullets. Both Glock and Heckler & Koch recommend exercising care, as the two manufacturers are well-versed in the production of polygonal barrels.

The reason for caution is due to the fact that cast lead bullets leave behind buildup that can seriously affect the accuracy of your shots. Moreover, you run the risk of damaging the polygonal barrel.

Now, with all that being said, it's worth noting that many USP 9mm owners report no issues with using lead bullets. However, since 9 mm rounds are pretty affordable all things considered, there's little reason why anyone shouldn't just err on the side of caution and stick with 9 mm.

The USP is notable for sporting a dual-spring assembly set up that acts as a recoil reduction system. Whereas most handguns during its time were made with a single recoil spring and guide rod, Heckler & Koch saw fit to innovative in the development stages and deliver a gun that is different from its contemporaries. 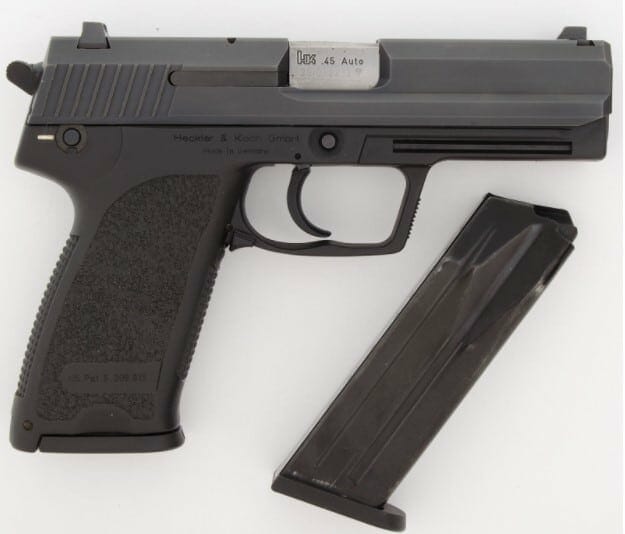 The result? Upon firing, the outer spring acts as the main recoil spring. Toward the end of the slide's engagement, the smaller inner recoil spring, ahem, springs into action. In doing so, it acts as a recoil buffer.

This all culminates into a more comfortable shooting experience. Heckler & Koch maintain that this system results in nearly 30% less flinch felt by the shooter. I'm not sure that I would go that far, but there is certainly a noticeable difference when compared to other pistols produced during the same era.

If I had to compare, I'd say it's pretty darn close to the recoil felt on a Beretta M9. So while it's not necessarily anything to boast about - and is certainly not reason enough to warrant the gun's purchase - there is a noticeable difference.

Of course, one has to keep in mind the time that this gun was built. If you're looking to invest in a comfortable handgun with a minimal flinch, there are many modern options available that do a much better job.

Dubbed "Variant 1," or "V1," by Heckler & Koch, the USP has both double-action and single-action trigger firing modes. Law enforcement also gets its own variant that features a modified trigger.

The modifications made serve to create a double-action-only pistol, with lighter trigger pull and overall easier firing. With the double-action, single-action design changed, the difference that was made is quite remarkable.

It offers a much easier shooting experience comparatively. On the standard USP, the trigger pull is quite long. Still, it's incredibly smooth nonetheless.

I find the single-action pull to be light enough on its own. Had I never tried the modified variant, I would have never known the difference. Still, even after knowing how each one compares to the other, I have no issues with the traditional setup.

The trigger break isn't quite as clean, however. But this is negligible and doesn't affect the firing. The trigger face is quite good, too, offering a wide design that is easy to pull. You'll notice that the USP comes with a small lock that is located inside the grip by the mainspring.

This lock can be turned with a tool that's included with the USP. Upon turning it the safe position, the gun with lock and be prevented from firing, This lock doesn't get in the way in the slightest and certainly doesn't interfere with firing.

This is a very simple yet beautiful pistol. True, it doesn't offer a lot of appeal in terms of innovative production quality, but it doesn't have to. In fact, I think the USP is better for it. Its basic construction is what makes it such a classic.

It boasts a sleek carbon nitride finish on the slide, adding further durability. Known as Hostile Environment finishing, you can use your USP in harsh weather and have the peace of mind that it will stay protected.

The manual safety lever on the USP is located on the left side of the pistol. You will find it neat the hammer. Simply push the lever on left to engage the safety. Controlling the safety control lever is very responsive, letting you know with affirmative clicks that it is locked in place. The safety decocking lever is actuated by simply pushing the control lever past the red-colored "F." 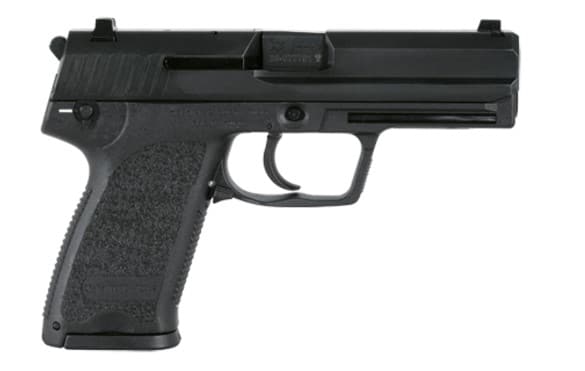 At the end of the day, the USP is a very reliable handgun. Thanks to the polygonal barrel design, shooting is accurate and responsive. Its lightweight body makes it all the better for a wide range of uses. For concealed carry, it will serve you very well.

The exceptional trigger is going to be a big hit among shooters both old and new. So if you're looking for a dependable pistol that provides a positive shooting experience, the USP will not disappoint.

Although it has plenty of years on it, it remains one of the better firearm investments you can make. For someone wanting to buy their first pistol, the USP is an excellent choice. It's a breeze to shoot and feels great in your hands.

And thanks to its long-lasting build quality, you can count on this pistol standing the test of time and remaining your companion for years to come.