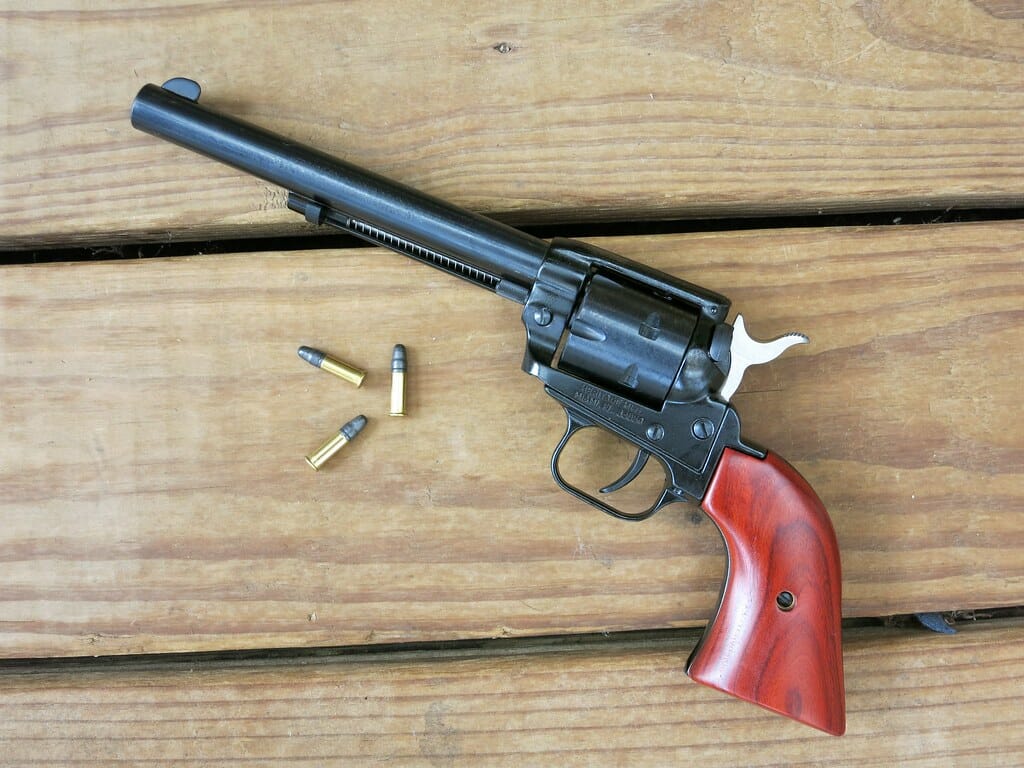 Keep me company as I excitedly plunge into a Heritage 22 Revolver review. Also known as the Rough Rider, this is a popular gun due to its simplicity, dependability, and rich history.

Writing gun reviews seems like the icing on the cake when you enjoy handling firearms as much as I do. You see, there is something unique about a revolver's sound, especially the hammer's click. More impressively, the cylinder's rotation to a fresh round often sends shivers down the spine as the body releases a new gust of adrenalin.

This is a sensation rarely matched by other guns. However, does this mean that revolvers are superior to semi-automatic pistols? Revolver's ease of use and robustness makes them dependable weapons of choice to most people.

It's love at first sight with a Heritage Rough Rider. These are the types of guns people buy to make a statement. It's bold, beautiful, and plays its role pretty well.

Suffice it to say that many western heroes used revolvers as their primary self-defense weapons. They have been around since the Civil War and continue to take the industry by storm.

The Rough Rider is a true western-style fun gun with a wide, smooth grip and deeply textured rubber. It has an old-fashioned look that will make you feel like the cowboy of your dreams.

While Taurus is the parent company, Heritage Manufacturing later acquired the brand in 2012. This is one of the largest gun manufacturers in the world. They are a force to reckon with when making affordable and high-quality firearms. Their revolvers are no exception and undeniably continue to stand the test of time.

Since the Taurus handover, Heritage Manufacturing has managed to stand by these standards. They effortlessly exceed clients' expectations through impressive packaging and limitless options that mimic the real old west spirit.

For instance, my heritage rough rider came in an attractive light brown box. Together with my revolver was a cute pistol chamber flag, hang tag, and trigger lock. Something else, the barrel measures approximately 6 ½ inches from muzzle to breech. 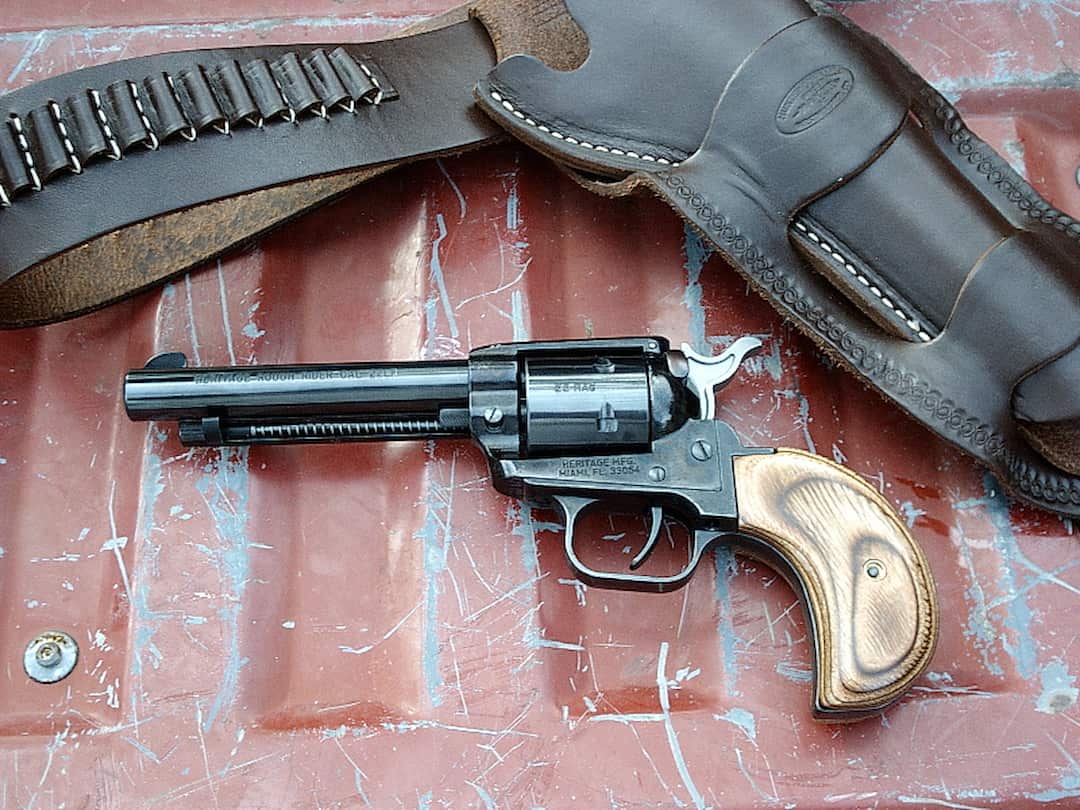 Some retailers also insert discount coupons on ammo or the optional Magnum cylinder. Another incredible first impression is the smooth and comfortable cocobolo wood grip. Moreover, the hammer, made from a stainless steel frame, is ideal for new shooters. In addition, the swing-out loading gate looks sturdy enough to last several seasons.

The packaging bears the brand logo and the "Made in USA" statement. The fact that this revolver comes from the United States is a major selling point for gun enthusiasts. Also, its classic design replicates the famous Colt Scout.

When testing some Rough Riders, I came across several barrel lengths, from the basic 6.5-inch barrel to a more sophisticated 16-inch one. Yes, you heard me right! The 16-inch was a sight to behold. Also, it left tongues wagging due to its size, accuracy, and efficiency.

Is the Heritage Rough Rider 22 Easy to Use?

Before revolvers, I was more accustomed to semi-automatic sights (tritium three dots). Much later, I also realized that single action stands out regarding accuracy. The fixed sights seem simple, but they work much better than adjustable sights. The front sight resembles a blade and sticks out slightly from the barrel. On the contrary, Heritage manufacturing has the rear sight placed on the top part of the frame from a u-notch cut.

Take into account that the choice of ammo, barrel size, and caliber used can deter the process of hitting your target. One secret is only to purchase high-quality ammo that makes your gun have a clear point of impact.

It is a relief that the 6 ½ inch barrel, combined with the small 22 caliber, translates to no recoil. That enables shooters to fire accurately even when handling two guns. New shooters should take advantage of the lack of recoil to improve their fundamental firing skills.

All in all, the Heritage Rough Rider 22 works with the same ease of use as the guns developed decades ago. In reality, the only modern addition to the old-time revolver is the hammer block safety. The feature with four positions is on the left side (opposite the loading gate). The first one, fully forward, rests against the firing pin. This is the hammer's resting place after firing.

You only need to flip it down to lower the bar blocking the hammer when in use. After firing, pull the hammer back gently until you hear a slight click sound. This action locks the cylinder and trigger and keeps the gun from firing.

This is not the only safety feature of these guns. There is also a modern thumb safety (opposite the loading gate) which you can easily maneuver with the shooting hand. Flipping it up (to a safe position) also enables you to block the firing pin.

If you flip it down (fire position), you can notice a little red dot on the gun frame. This indicates that the revolver is ready to shoot. Apart from engaging the manual safety and placing the hammer in the right position, experts also recommend to carry handguns with the hammer over an empty chamber.

Is the Heritage Rough Rider 22 Any Good?

The build quality of Rough Rider guns is one feature that stands out. It weighs roughly two pounds, made from good quality materials, and feels solid in hand. In short, it has a nice texture that helps you hold on even when your hands are wet or sweaty.

Above all, the trigger pull on this gun is excellent.The cylinder locks up tight when you cock it back to load and unload the shells, indicating high-quality craftsmanship.

When we talk about quality, I know some people with Rough Riders that have served them for over two decades and are still counting. The beauty is they can last for years without rusting or becoming damaged.

The only disadvantage is the time-consuming loading and unloading process. Yet, once you load your revolver, it's fairly simple to point naturally, target and shoot. The trigger rarely moves, making accurate shooting easier especially when firing in bulk. As a result, you can achieve incredible accuracy even when firing 22LR ammo at high speeds.

If you intend to use your weapon for linger distance, it is adjustable to allow you to dial in your shots. This can be extremely useful when attempting to hit targets more than 50 yards away. The scope is also useful when dry firing, as you can use it to determine whether or not to shoot your prey.

Like other single action, a Rough Rider is plenty accurate and has perfect timing. This is unlike any other low-cost revolver on the market. They also come with a manual guide instructing experienced and novice shooters on proper shooting techniques. On that note, how does a traditional Rough Rider work?

Roughriders have fixed cylinders and do not swing out during loading. You must pull the hammer to a half-cocked position to load your firearms and rotate the swing-out cylinder. This allows users to load one cartridge at a time into the cylinder.

Proceed to open the right side loading gate on the frame opposite the hammer and insert rounds of ammo one by one. Rotate the manually cocked cylinder and repeat the process until you get the chambers of the six-shooter revolver full.

Once the loading gate closes, you can proceed to the next firing level. Soon after shooting, the gate reopens, and the hammer resumes to half cock. To unload a Heritage Rough Rider 22, you must again place the hammer in the half cock position. An ejector rod under the barrel then presses to eject the spent casing simultaneously as the cylinder rotates.

You can find the ejection rod craftily built inside the barrel. Pull the plunger and release it if you intend to empty all six chambers. Then turn the cylinder, clean, and rinse. Repeat the cleaning process several times for the best results.

I've used several single-action revolvers, but nothing beats a Rough Rider in safety and dependability. It is also simple to maintain, but you must clean it after each shooting session. You can achieve this by simply wiping down the outside with a damp cloth and then applying a few drops of CLP or gun oil to the moving parts on the inside.

With this modern revolver, don't worry about rusting or corrosion because it can last for years without needing repairs. Here are some quick maintenance tips that I use on all of my revolvers. 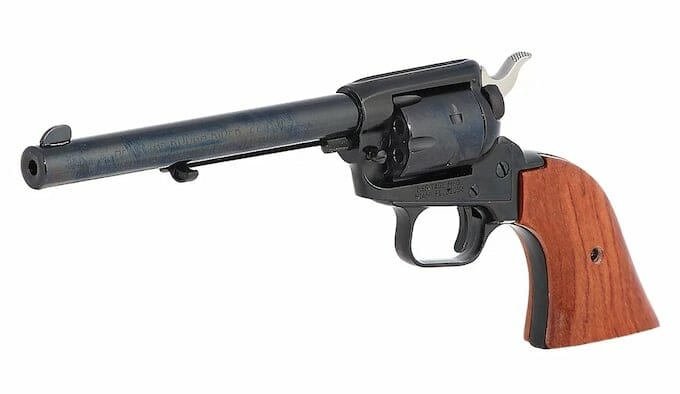 Shooting is a competitive game that involves precision, accuracy, agility, and speed. Using a Rough Rider enables shooters to achieve these skills at ease. Below are the main advantages and the drawbacks I found of purchasing a Heritage Rough Rider 22.

Is Heritage a Good Revolver?

There is no doubt that the Rough Rider revolver series is a solid gun with a lot of character and impressive history behind it. While they speak volumes of the historic Old West culture, some modern innovations continue to give them a run for their money. With marketing tactics and the introduction of larger calibers, competitive brands may seem like they dominate the scene. The Rough Rider outperforms them in accuracy, affordability, and positive gun reviews.

I won't deny that I occasionally crave a double-action trigger. Nonetheless, Rough Riders always bring me back home thanks to their various rim shapes and different lengths. In a nutshell, it is an excellent gun to practice shooting a single-action revolver. They are also affordable compared to a longer barrel gun. Above all, it's also ideal for beginners who value safety when handling short barrel guns.