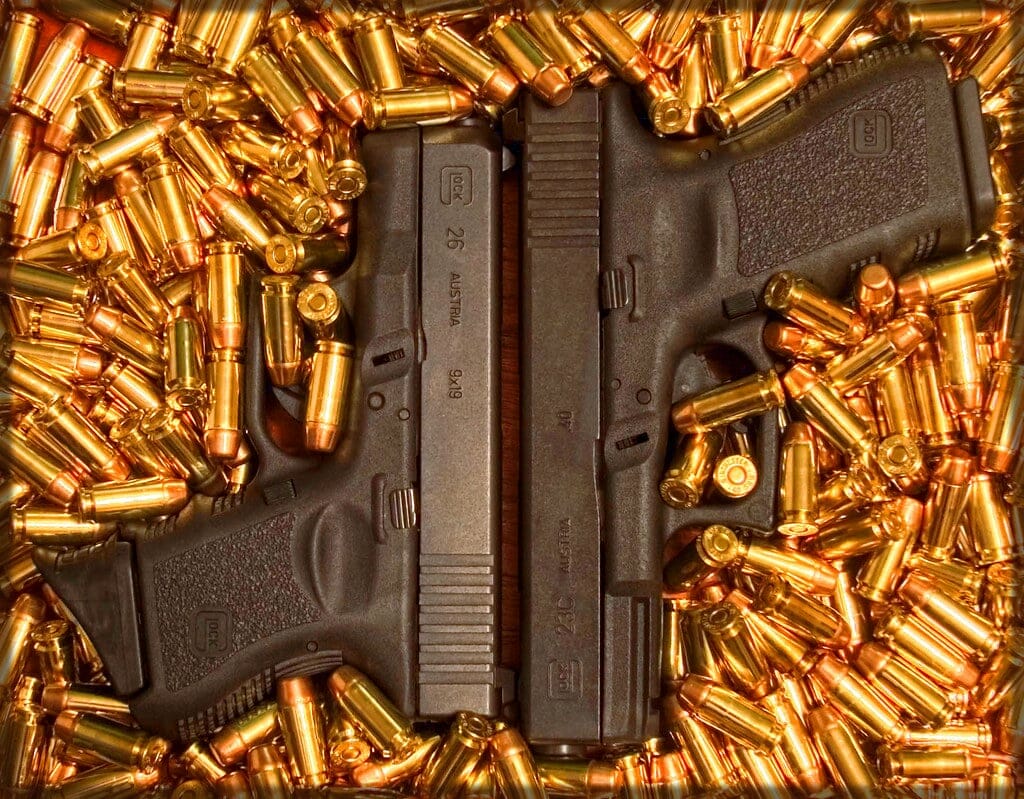 Reliability and excellence are two of the first things that come to mind when you hear the name Glock. In the early 1980s, the Glock line of weapons swept the shooting world by storm.

The Glock has become a popular choice for both police and civilians for various reasons. For example, you can use the Glock 18 with an extended 33-round capacity magazine or Glock 17 magazines that hold 10, 17, 19, or 24 bullets.

However, before determining how many rounds it can spit, this article will answer how many bullets does a Glock hold. Let’s dive in.

How Many Bullets Does a Glock Hold?

Glock semi-automatic pistols have a reputation for having large magazine capacities. With the “wonder pistols,” the Glock 17 was one of the originals. Glock factory magazines come in various styles and capacities to suit specific applications.

A Glock’s magazine capacity is essential when buying a firearm for home defence or concealed carry. It can aid you in choosing what handgun to buy and how to load it.

To answer the question on the number of bullets a Glock holds, here is an explanation of the terminology. 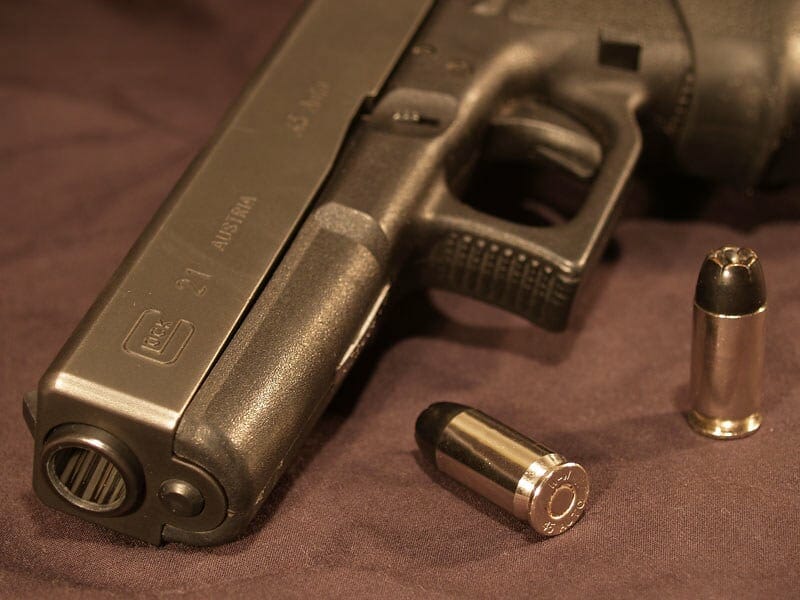 The Capacity of Glock Magazines

The metal piece that exits the barrel is the bullet, but it's not the only one. You find the propellant powder inside the cartridge case, and the primer's function is to light it up.

Most semi-automatic pistols use detachable magazines to hold their ammunition. A magazine is separate from a clip since it organizes cartridges before feeding them into a magazine. Most magazines carry cartridges in one of two ways:

Most Glock pistols stack the cartridges of a single stack magazine in a single feeding column, one on top of the other. For this reason, you can reduce the magazine's body and frame. Expanding the capacity of a magazine demands increasing its length.

The cartridges in a double-stack magazine are in a dual feeding column. The design keeps the magazine extensions while boosting its capacity by extending its width.

How Many Bullets Do Glocks Take?

It's debatable how many bullets a pistol should hold. Choosing a firearm or magazine that meets your needs is essential if you feel that a specific quantity is necessary. But sometimes, it's vital to strike a balance.

In the regular Glock 17 magazine, the 9mm ammo capacity is only a coincidence. The coincidence no longer holds in succeeding handgun designs, so it's essential to know the magazine capacity of a standard Glock.

The Glock 18 is a machine pistol with selective firing that replaces the Glock 17. You can buy the G18’s regular magazine commercially. However, it is not commonly available to individual citizens. The 33-round magazine sticks out from the pistol grip, making it impossible to conceal.

A subcompact version of the full-size Glock 17, the Glock 19 handgun, was first presented in 1988. A 15-round magazine is standard on this pistol, making it the same as the Beretta 92FS (M9) and SIG P226 in terms of capacity.

How Many Bullets Does a Glock 19 Extended Hold?

Depending on the manufacturer, a Glock 19X mag can hold between 17-19 rounds. However, be careful about your jurisdiction as some regions prohibit that amount of magazine rounds.

The Glock 20 chambers in the powerful 10mm auto as a full-size handgun. The G40 is the long-slide version of the gun. There is a 15-round magazine for both Glock pistols to use.

The Glock 21 uses the .45 ACP cartridge, which Glock introduced in 1990. Most semi-automatic pistols were available before the G21's release. Until recently, they used .45-caliber pistols to load from single stack magazines with a maximum capacity of 10 rounds. The G21 has a standard magazine capacity of 13 rounds.

Glock released the G22, a pistol chambered in the newly developed .40 Smith & Wesson cartridge, in 1990, beating the round’s co-designer to market. The G22 comes with a 15-round magazine. However, extended magazines with 16 and 22 bullets are also available.

During the early 1990s, Glock made their first attempt at concealed-carry pistols with the G26 subcompact. There are 10 rounds in a flush-fit, double-stack magazine for this semi-automatic 9mm handgun.

The 10mm Glock 20 lacked a subcompact counterpart, so Glock came up with the G29 to fill the void. There are 10 rounds of 10mm ammo in the magazine of this small powerhouse.

The Glock 30 is a .45 ACP subcompact Glock with a double-stack magazine that holds 10 rounds of ammunition.

The G31, a semi-automatic pistol chambered in .357 SIG, has ballistics at par with a .357 Magnum service revolver. Compared to defensive 9mm loads, this cartridge has higher penetration and kinetic energy, and it comes with a 15-round magazine to boot.

The G36 is the same caliber as the G30, chambered in .45 ACP. It feeds the G36 from a single-stack 6-round magazine, which reduces its weight.

According to several shooters, the Glock 26 was still wider than they desired despite its compact profile. Glock came up with the G43 as a solution to this problem. It is a subcompact handgun fed from a 6-round single-stack magazine, lowering the grip width by a fifth of an inch over the G26. It holds the same number of rounds as the G42, which chambers .380 ACP.

It is a single-stack, subcompact 9mm handgun with a somewhat longer grip than the G43, making it more comfortable. As a result, you can load a 10-round flush-fit magazine into it.

Glock’s G44 rimfire pistol chambers in a .22 Long Rifle, making it the smallest rimfire pistol in the world. It has a ten-round capacity in its load-assist magazine.

G44 is a low-cost training instrument for center-fire shooters to familiarize themselves with and range practice. You can also use it to teach handgun marksmanship to beginner shooters.

The G45 is a 9mm pistol and not a .45 ACP (or GAP) despite its name. As a smaller version of the G17, it doesn’t sacrifice magazine capacity to be more compact. Its 17-round magazine capacity is identical to the pistol that started it all.

There are ten rounds in a magazine for the G48, a compact semi-automatic pistol in 9mm.

What Bullets Go in a 9mm?

It's important to know what kind of ammunition you need before buying it. You want to make sure that the ammo you're using is compatible with your gun. The 9mm is an excellent caliber because it's so widely available.

The cartridge for a 9mm handgun measures 9X19. One of the most often used rounds in handguns, whether for hunting, self-defense, or other purposes.

A 9mm handgun comes in various calibers, and the type of shooting, power, and recoil all play a role. The following are some standard 9mm ammunition options available to you. 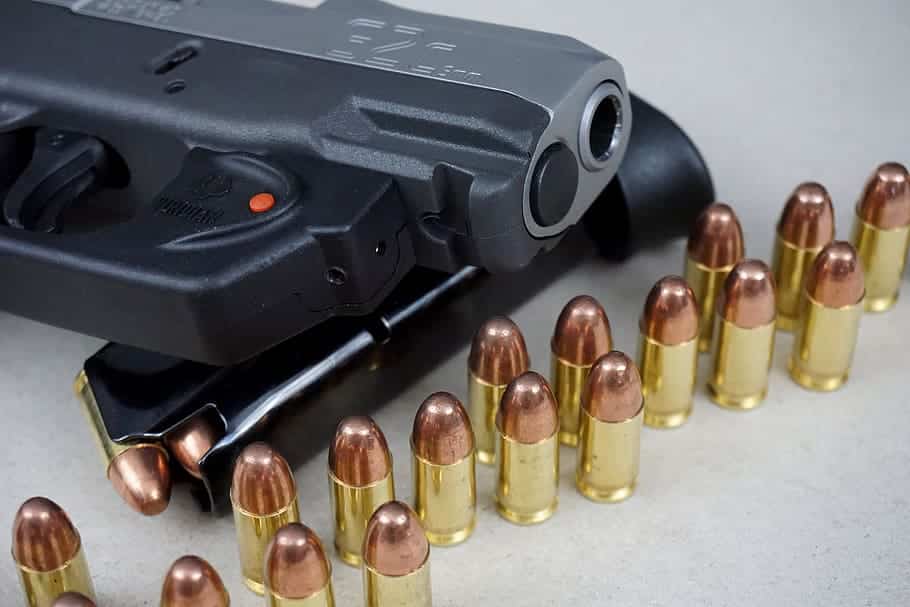 One of the most popular weapons cartridges is the 9mm Luger, rimless and tapered. In 1901, an Austrian firearms inventor named Georg Luger came up with the initial concept of the weapon. It’s one of the most common types of handgun cartridges. It is easy to use, powerful and used in various firearms.

They gave the 9mm Luger name to this cartridge since they initially designed it for the Luger semi-automatic pistol, but you can also use it in other pistols. You find that most police rifles rely on this type of ammunition.

In Soviet times, the 918 Makarov was a standard round for submachine guns and pistols. The design was to use it as a self-defense pistol cartridge with a short-range.

As a post-World War II development, they unveiled it in 1946. The 918 Makarov was a strong cartridge with minimal recoil when fired from a blowback handgun of that time.

To prevent re-invasion by the Germans, they built the 918 Makarov with a slightly larger than usual caliber .365.

However, it was not until 1951 that the Soviet army started using the 918 Makarov. Using a basic 95-grain load and a standard muzzle velocity of 1050 feet per second, the 918 Makarov’s effective range is 50 meters or 55 yards.

There has been a long history with the rimless, straight-walled .380 ACP cartridge that dates back to its invention in 1908. The design was to use it as a self-defense pistol cartridge with a short-range. Even though the design was for the Cold Model 1908, this self-defense cartridge has become a classic in the American arsenal. Modern handguns can make use of it, especially smaller pistols.

Compared to the 918 Makarov, the.380 ACP has a lower average muzzle velocity: 980 ft/s. Nonetheless, it also commonly shoots a 95-grain bullet. Because Buffalo Bore is a U.S. manufacturer, it has developed high-velocity variants of .380 ACP cartridges.

Its range varies from 50 to 100 yards depending on the gun and the shooter’s competence.

Remember, it’s not safe to use .380 ACP or 9mm rounds interchangeably. Even though they share the same diameter, their lengths vary, presenting a risk.

Glocks are dependable because they are hard to break. They are also evolving and among the most straightforward and accurate handguns. Magazine capacities range from six to 33, and they are easily accessible. The price also varies depending on the model. It means that there is a Glock pistol to suit every need.