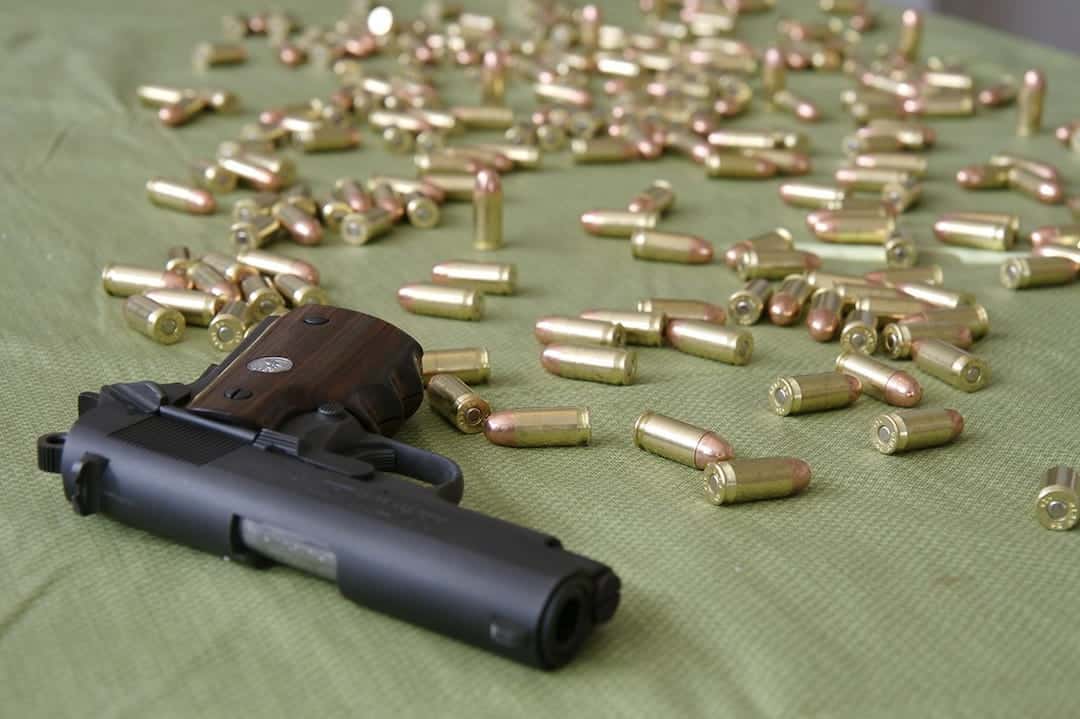 The turn of the 20th century saw the advent of semi-automatic guns. Some like the Colt 1911 or the Colt government would go on to influence the design of many modern pistols today. This magazine-fed firearm holds a special place in gun enthusiasts' hearts, but it's also unique in terms of history, magazine capacity, and versatility.

However, there is always one confusing notion, how many rounds does 1911 hold? Before determining how many rounds your colt 1911 can hold, take time to peruse the following factors.

Model and Make of the Pistol

There are many modern pistols on the market, but not all hold the same amount of ammo. A model number may guide you on the number of rounds best for your rifle.

Pistol caliber refers to the diameter of the bullet that a pistol uses. The most common size is .45 ACP. Altogether, the most critical aspect of pistol calibers is that every time you purchase .45acp ammo, for example, you will use it only in your .45acp pistol.

By purchasing one caliber of ammunition for all of your guns, you avoid many headaches associated with mixing and matching cartridges and calibers.

The ingenuity behind Colt's invention of these compact models is matchless. Some of the most impressive features that enable the 45 ACP pistols to dominate the market include the magazine, the recoil spring, rounded hammer, and the chambered ammo types. Unlike other pistols, the .45 ACP prowess has remained almost unchanged since its introduction in 1911. Nonetheless, before buying one, keep in mind that a single stack is a reliable weapon and great for concealed carry. Double stack 1911s are more realistic in a duty/home-defense situation. What’s more, the pistol has enormous stopping power and an enhanced ammo capacity. 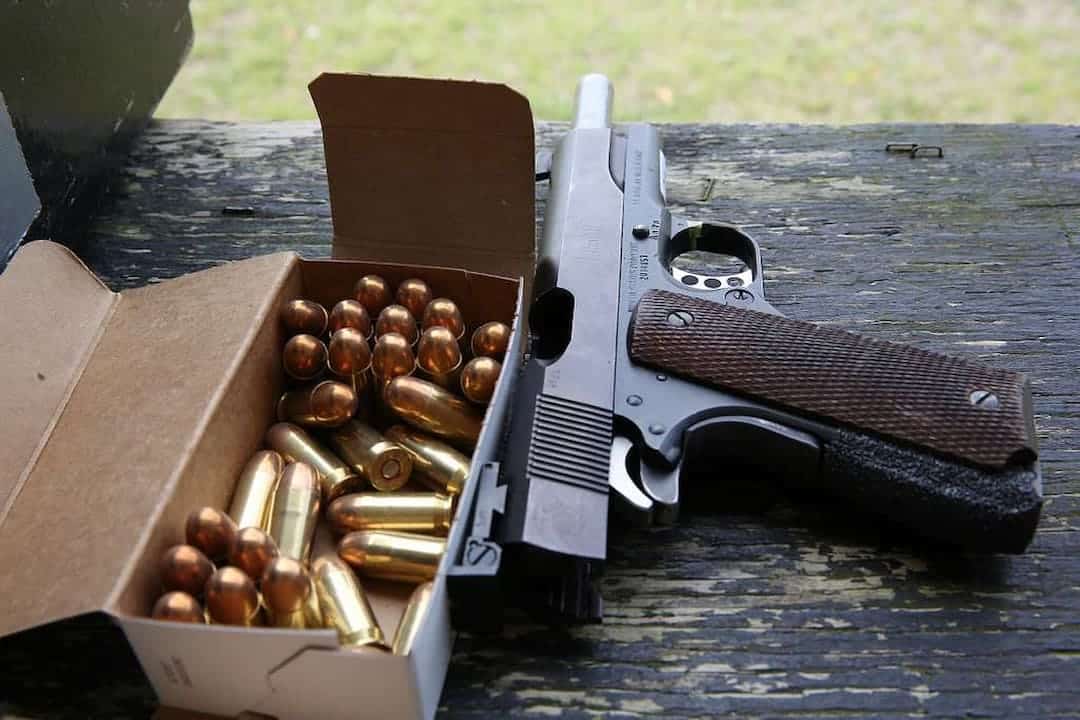 It’s never easy for an inexperienced eye to determine the number of rounds in a pistol based on the magazine layout. A colt 1911 has double and single stack ammo magazines. While both options have specific advantages, knowing how many rounds they hold can help you determine the best package.

The main difference is that singular stacked magazines hold seven rounds plus one chamber in one column. Some Colt pistols have eight-round ammunition magazines, while others use a lesser ammo capacity of five or six rounds. Pistols-based original browning design had a detachable single stack magazine holding seven rounds of 45 ACP ammunition. Later, Colt chambered 1911 with higher capacity magazines like the 22 long rifles came into play.

On the hand, 45 ACP double-stack magazines hold 9-14 rounds in staggered rows. Apart from the stopping power and enormous stopping power, double stacked magazine designs carry more rounds to the advantage of the user. In addition, they increase ammo capacity and enhance the pistol's handle width.

For those eager to own a colt defender or colt commander, take into account that they hold eight rounds and double magazine capacity. Colt invented these semi-automatic pistols in 1949 as an army requirement for a lighter replacement. Dan Wesson introduced the flat recoil spring in the classic Colt commander as one of the most technological advancements.

There are fewer chances of rounds binding when placed together in one stack. In addition, single stacks feed ammunition into chambers better.

Law enforcement agencies prefer single stacks because of their stopping power and high capacity magazine with precise accuracy at a short distance. The successful recoil spring expedites ejection, next round chambering, and extraction,

Single stack magazines are light on weight and heavy in usefulness. If you are looking for a highly concealed carry gun without feeling the extra weight, look no further. Moreover, shooters with smaller hands may enjoy better grip safety.

When shooting, a single stack magazine design gap rarely goes out of the steel frame. Adding more ammunition requires less force too. These two factors allow ease of use and better control over your firearm.

The standard magazine in a single stack can only hold a maximum of eight round ammunition magazines. Even if this pistol has fewer rounds, the recoil spring makes it a sturdy and reliable weapon.

A high or large capacity in a double-stacked magazine holds more rounds than a standard magazine. The positive aspect is that they allow shooters to fire for longer durations.

Although it is not easy to conceal a double stack, it is nearly impossible to detect one on muscular or burly individuals. Skinny individuals can wear layered clothes for the same purpose.

The relatively higher weight of these semi-automatic firearms makes them challenging to shoot. Undeniably, this decreases accuracy and practical ability to hit targets. In other terms, increased mass often leads to reduced acceleration or a reduced recoil operation.

Concealing double stacks is an entirely different game with its longer barrel - see Charles Daly 1911 - and larger grip. It's harder to mask a pistol under clothing for small-sized individuals. Nevertheless, if camouflage is your main agenda, kindly seek a lighter replacement.

While double stacks boast enormous stopping power, the added weight can be a nuisance if you carry them for long durations. Seek a lighter replacement like a single stack for comfort if you spend considerable time on the road.

How to Make the Best Choice Between a 1911 Double or Single Stack?

Making an ultimate choice between a double stack or a single stack depends on how many rounds and personal preferences. In a nutshell, what is the purpose of your purchase? Do you want a firearm for defense or hunting? Whatever the reason, here are relevant factors to consider.

Individuals who are super quick on the draw may consider single stack 1911 pistols, as the reduced grip circumference enables a faster draw. Singular stacks are also beneficial for smaller-framed shooters or those having trouble reaching across their chest due to injury or disability.

The width of your hand can determine whether you should go for a single or double stack. Double stacked pistols are great, but their extra thickness can make the grip size awkward for small-bodied people. Remember, an inferior grip control, especially during self-defense, can be life-threatening.

However, if you have a small hand but still desire to increase ammo capacity, spend more time on the range and learn more about handling a wider pistol's handle width. Alternatively, keep extra magazines on standby when using single-stack firearms. 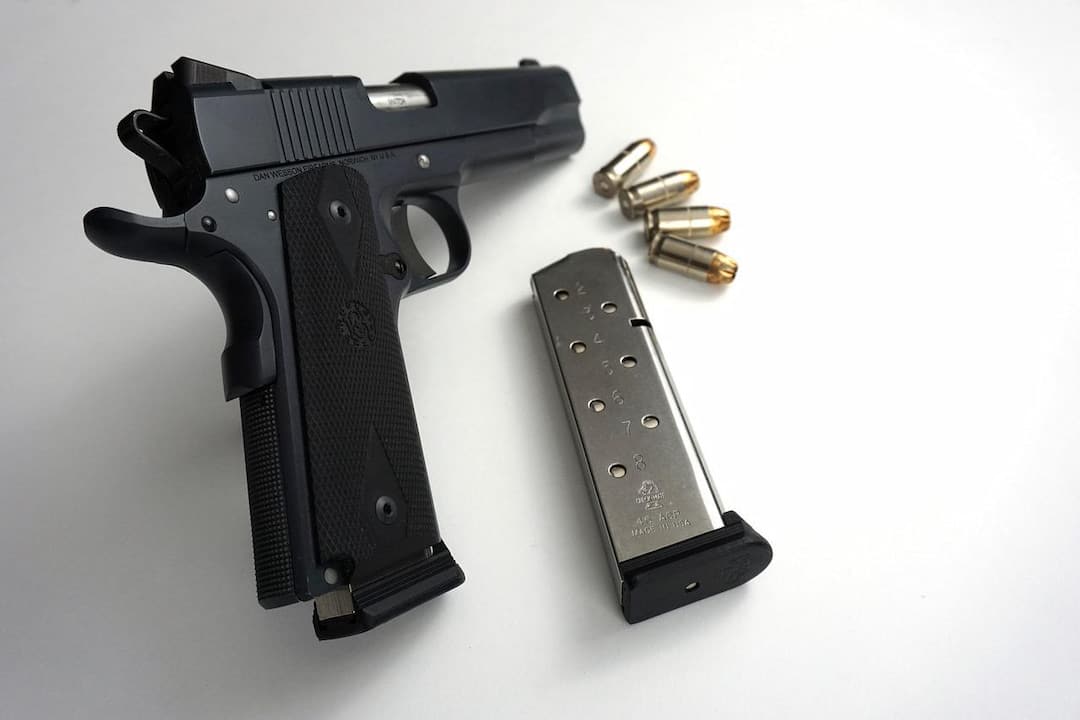 Having a larger double stack of .45 ACP on your hip is unquestionably comfortable. The bottom line, pick your preferred pistols depending on the weather and choice of clothes. For instance, a single stack may come in handy for concealed carry or when wearing light clothes during summer.

Aftermarket magazines are different sized accessories or upgrades that replace the original magazine in your pistol. Its function is to hold the rounds before loading them into the chamber.

How Long Should You Keep Your Eight Round Ammunition Magazine Loaded?

Beyond anything else, do you know how to load 1911 pistol with rounds? Take into account that frequent reloading and unloading can potentially damage your pistols. If you maintain a specific pattern (exact loading rounds) for an extended period, the situation can become worse.

Despite all this, some colt pistols based on the original copy can stay loaded with rounds for years and continue working flawlessly. Nevertheless, ammo manufacturers advocate a periodic rotation of colt magazines at least twice yearly. More importantly, fire off the reloaded rounds regularly to prevent damaging your springs.

Which Is the Best Buy?

The ingenuity behind Colt's invention of these compact models is matchless. Some of the most impressive features that enable the 45 ACP pistols to dominate the market include the magazine, the recoil spring, rounded hammer, and the chambered ammo types. Unlike other pistols, the .45 ACP prowess has remained almost unchanged since its introduction in 1911. Nonetheless, before buying one, keep in mind that a single stack is a reliable weapon and great for concealed carry. Double stack 1911s are more realistic in a duty/home-defense situation. What’s more, the pistol has enormous stopping power and an enhanced ammo capacity.