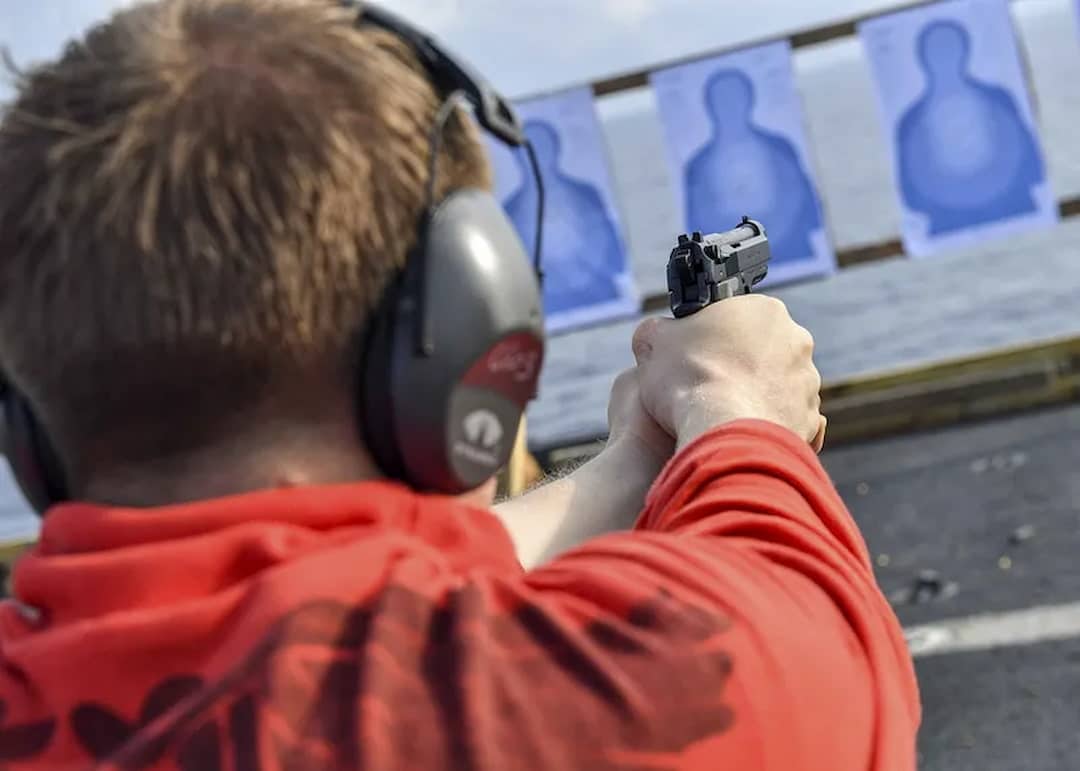 It's hard to come across a more controversial topic in recent times than gun control. On one side, some people think that owning firearms should be strictly prohibited. On the contrary, others believe that firearms should be outlawed, particularly among youth and underaged.

The silver lining is that controlled shooting in a registered range is relaxing and a perfect way to divert your mind from stress. Are there any exceptions to the rules about age and shooting ranges on that account? In short, how old do you have to be to go to a shooting range?

What Is The Youngest Age Allowed to Shoot at a Range?

While Federal law forbids minors from owning some firearms like the pistol, rules on proper shoot age are never consistent. For instance, the range rules prohibit handling a handgun and ammunition by children under 18 not accompanied by a parent.

Nonetheless, the National Rifle Association never mentions the proper age limit for long gun handling. Based on this information, how can you find a shooting range that is appropriate for your age?

There is no definite rule in the US that pinpoints the right age for children in a shooting center. However, kids mature differently, with some learning how to shoot much earlier than others. Therefore a range needs to check on maturity, desire, and discipline levels in a young shooter before enrollment. The secret is never to push a child to guns if they are never enthusiastic about it. 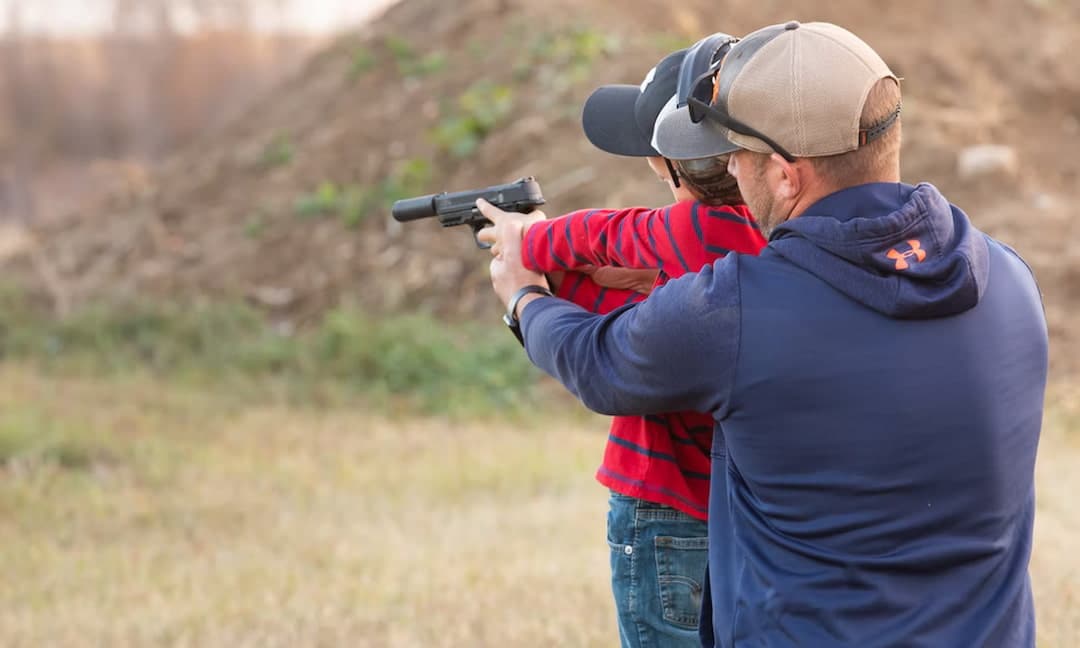 Importance of Setting a Minimum Age in a Range

Guns have been an integral part of American culture since time immemorial. It started with the first European settlers and has continued through to the present day. What began as a means of survival quickly became a sport of the aristocracy and, later, a symbol of freedom.

Brace yourself as we expound on the permitted age for firearm handling in selected States.

Nevada forbids minors less than 18 years from firearm possession and handling unless accompanied by a parent or legal guardian. Under some conditions, persons below 14 years may possess guns without the approval of an adult. This applies to teenagers with valid hunting licenses and proven permission from their parents to handle firearms.

Parental consent is also necessary for legal firing competitions. Still, the law restricts juveniles from carrying loaded guns when out of designated areas.

Initially, California operated under the minimum age rule of 18 years until 2019. However, a federal appeal in May 2022 struck down the under 21 ban on gun handling in California. The law came to pass thanks to Congress's increased failure on gun control.

All in all, minors from as low as five years can proceed with proper shooting lessons under direct supervision from a qualified range safety officer and parents.

The minimum age limit for Tennessee residents to possess guns is 21 years. Exceptions to this requirement occur if a citizen is at least 18 years or a registered or retired / honorary discharged staff of the US Armed Forces. Underage children below 18 years may only fire under the supervision of legal guardians and range staff.

From September 2021, new laws banned gun permits, either concealed or in the open. However, you have to apply for a license to carry firearms from the Texas Department of Public Safety.

Moreover, long arms and black powder firearms do not fall under the firearms category. Thus, you can carry them in public without legal permits. However, persons below 18 years require consent from parents and guardians to enroll and participate in shooting center activities.

Georgia is one of the American states with the most lenient firearm and range rules. Others include Idaho, South Carolina, Alaska, Arizona, and others. Citizens can carry handguns openly in public without concealing or going through rigorous training in a shooting area.

Nevertheless, the State prohibits control and ownership of guns to individuals below 18 years. The prohibition does not cover minors who:

You can only get legal permits to handle firearms in New Jersey after the 18th-year mark. Still, purchasing and bartering rifles below 21 years is illegal, with the State imposing harsh penalties on offenders.

Additionally, citizens only qualify for the Firearm Purchaser Identification cards for long guns from 18 years. However, individuals below 18 years can handle guns if accompanied by a parent or under supervision from vetted range personnel. 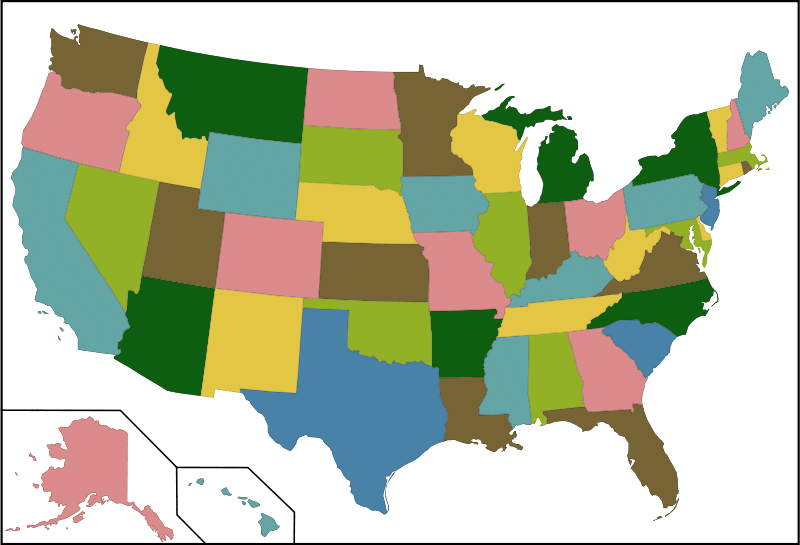 How Can Ranges Operate in a Safe and Controlled Manner

Ultimately, shotgun safety among the youth cuts across as a contradictory topic since they are more at risk of unintentional homicides and suicides. It is a pity that the US recorded over 20,700 gun-related deaths in 2021.

Such shocking statistics may aggravate if ranges continue to operate with no precise rules.  Meanwhile, a competent range officer should focus on the following precaution steps when training juveniles.

The importance of backgrounds check becomes inescapable because you never know if the next person on the firing line is a criminal or not. In fact, some people convicted of crimes portray perfectly ordinary lives.

How can ranges verify the criminal records of other patrons and underage members? The following safety regulations list is not exhaustive but touches on vital red flags that a range master should check. 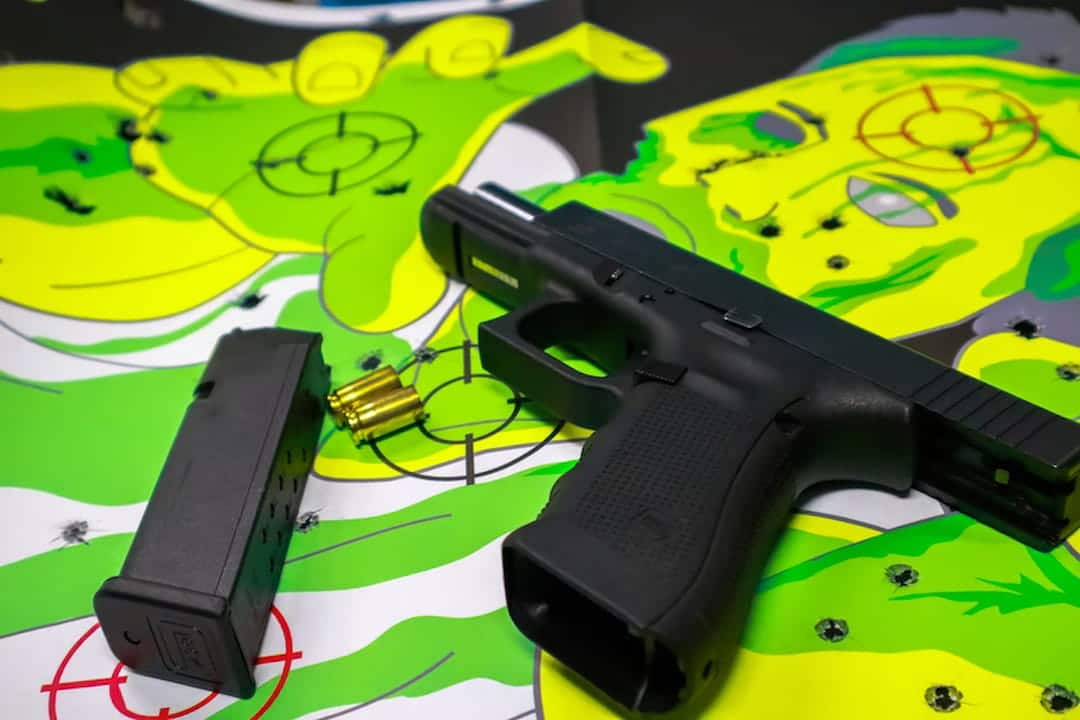 There's more to gun safety than just coming into contact with range ammunition. However, the National Rifle Association describes firearms as both a tool and a toy. This dual classification makes them not only valuable but also unpredictable.

In light of current events, it may not be a stretch to say that priority should also shift to how to shoot firearms safely in a shooting station. In short, a child shooter should be respectful, have self-control, follow range personnel commands and practice during specific hours of operation to prevent burnout.

More importantly, they should remain on the assigned lane/firing line and keep guns pointed downrange or in a holster when not in use. Critical safety rules such as eye protection and the use of correct ammunition should be on the top of the list in a trustworthy training center. Other than that, shooters must keep the magazine removed to avoid fatalities when handling a loaded firearm in the range.

An ideal location for a gun range depends on personal preferences and what a child intends to learn. Indoor shooting ranges are best for novice shooters with little prior experience or if the weather is too bad to go outdoors. In addition, the constant lighting and controlled climate make it easier to shoot accurately.

The downside, it can get expensive and tedious, especially when a range master trains several young shooters simultaneously.

For safety reasons, a range should consider the choice of firearm, ammunition and rifle range requirements. For example, in pistol or shotgun target lessons, range officers need to consider that fired bullets can travel up to 500 yards away.

Altogether, the best archery ranges should have accessible facilities like restrooms, well-defined targets, enough ammunition, plus quality eye and ear protection gadgets. In most cases, a dependable range safety officer would not advocate steel core ammunition because of its tendency to bounce off. 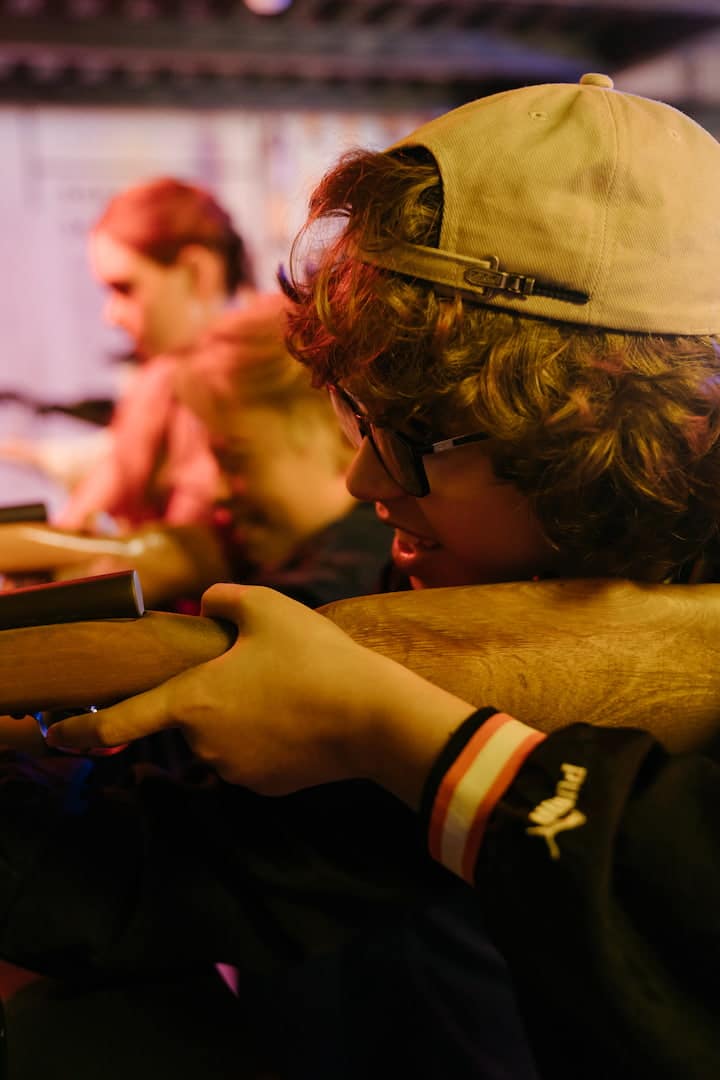 The parent or LeGuardian's Approval

There is one common question among avid shooters, “What is the youngest age you can shoot at a range?” Even without a straightforward answer, the main subject is that a range should set limited rules for young ones. Moreover, parents must supervise their hours of operation and adhere to the use of eye and ear protection measures.

Guardians also need to sensitize critical techniques on armor-piercing, ammunition used, trigger dos and don'ts, plus tips on targets. The idea is to instigate a disciplined and safe range culture from the beginning. 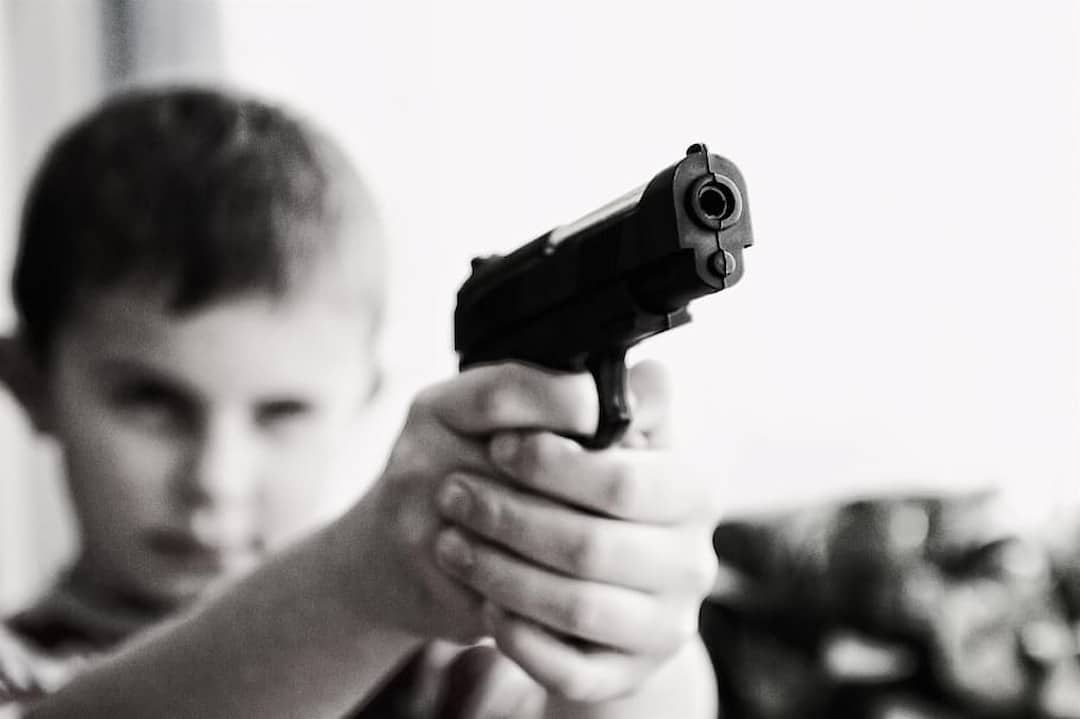 What are the Initial Steps for Children in a Range?

Millions of patrons in the States visit a training center each year to learn how to hit targets accurately. Some are shooters who get their kicks playing Call of Duty or Battlefield. Others are hobbyists who like to tinker with their guns and enjoy the camaraderie of other range patrons.

Whether you aspire to learn about the best hunting firing line or load black powder ammunition, range use gets the adrenaline pumping. However, before the first shoot lesson, range officers must ensure that underage shooters meet the State age, licensing, and qualification requirements. The next focus should be on basic knowledge, such as rapid-fire, ceasefire and how to wear eye protection. The beauty is that with parental consent, a range can be a crucial stepping stone for talented hunters in the future.