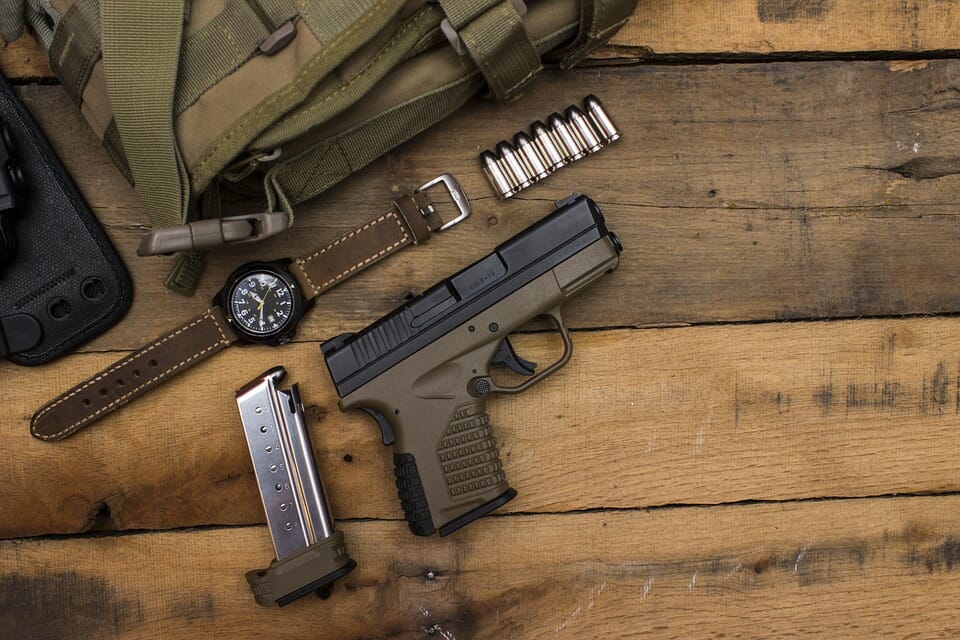 Pistol vs. handgun. Aren't they the same? Well, not quite. To clear up the confusion, I'd like to discuss what makes a pistol a pistol and a handgun. My hope in doing so is to broaden your understanding of firearms in general.

We're living in a time when there are a lot of misinformation surrounding guns. The best way to overcome this problem is to provide factual information and share it as much as possible. And you can do your part by sharing this with your friends and family. So with that, let's begin.

In the most rudimentary sense, a gun is absolutely a gun for those who do not own a gun or have any information about them. However, that is like asserting that a car is a car. There are numerous makes and models, each with unique features and options. And don't forget about trucks, a completely separate category all unto itself. In thinking of all the different types of cars and other vehicles, you start to get an idea of the vastness of "guns."

To borrow a phrase I found on Reddit, where one user noted that "A revolver is a handgun but not a pistol. All pistols are handguns, but not all handguns are pistols — some are revolvers."

Confused? Let's clear that up. But, first, let's break down each term in its simplest form.

"Gun" is simply a general term for any firearm that fires a projectile with the means to kill. I say "means" because not everyone who fires a gun intends to kill at the time of shooting it.

For example, some people use guns for target practice or in professional contests, where wearing a protection gear is an imperstive.  However, guns are designed to kill their targets. That's why BB guns have the "BB" prefix and aren't loosely grouped with conventional guns. But I digress. 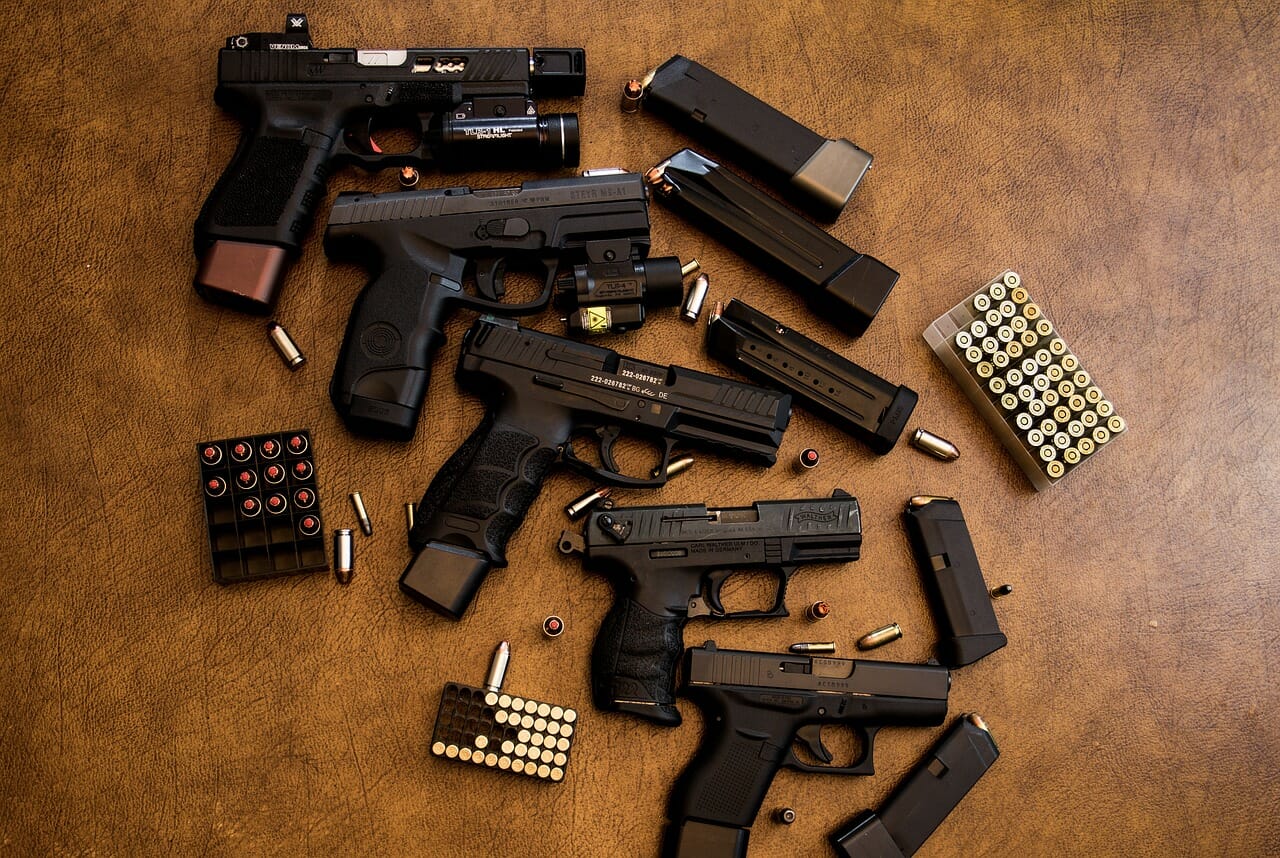 With the invention of gunpowder, portable firearms began in China

around 1000 AD. The Chinese found that using gunpowder strengthened their

projectiles enough to hurt or kill seriously. Since the mid-14th century, the

term "gun" has been used to describe such projectiles.

As its name implies, a handgun is a gun designed to be held in your hand. With that said, so are pistols. Unlike rifles and shotguns, which require two hands to operate, handguns require only one hand. 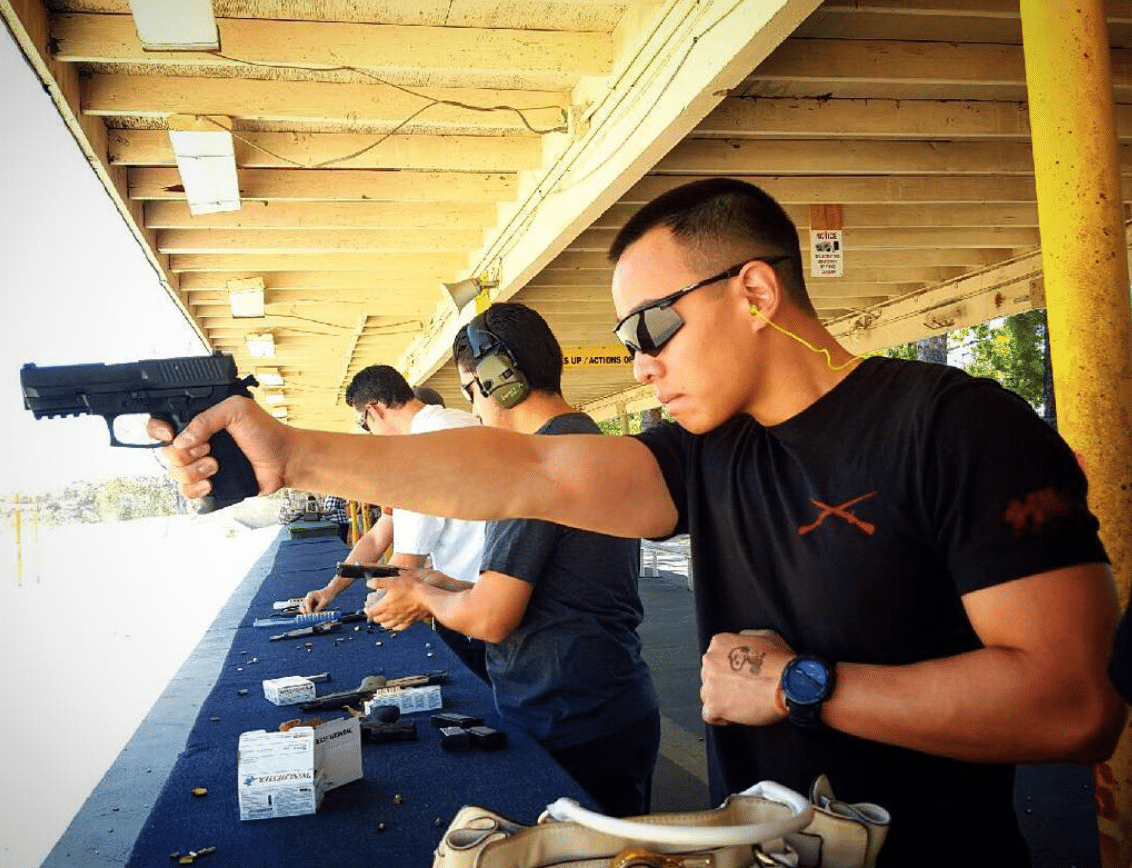 A handgun can be any type of projectile-firing weapon that can be held and operated with one hand. This includes revolvers and pistols. Handguns first appeared in the 15th century, but it's unclear as to who actually invented them.

Technically speaking, a pistol is a handgun. The difference, however, is that pistols have a single chamber. Some people try to classify revolvers as types of pistols, but that doesn't fall in with the single-chamber line of thinking. 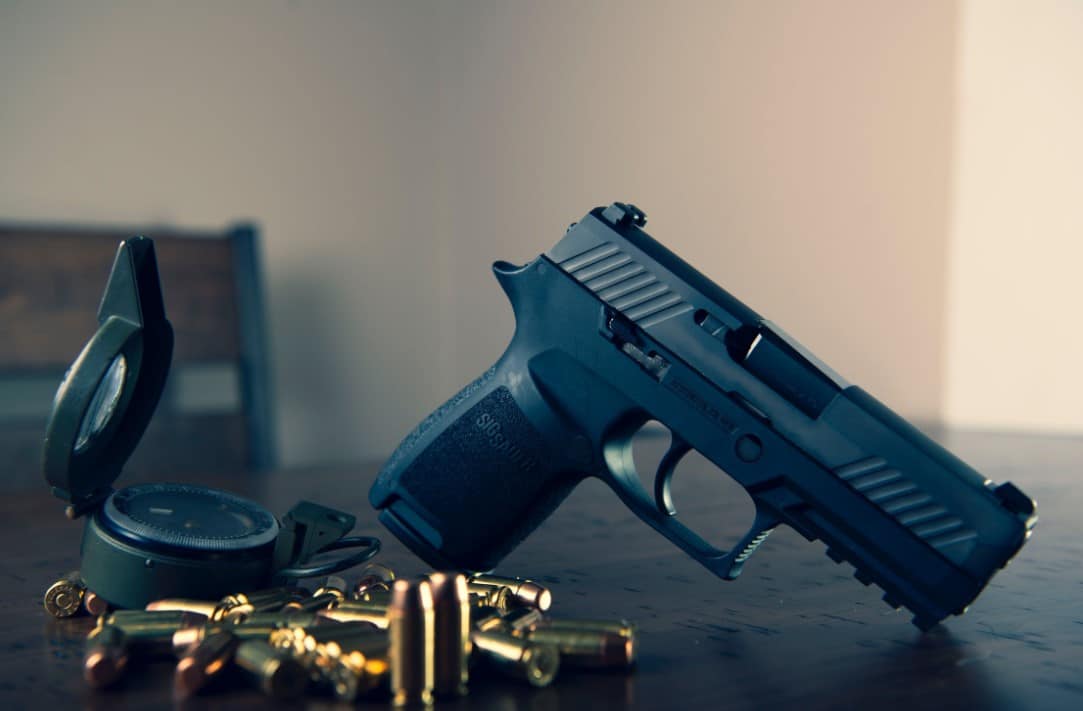 Revolvers have multiple chambers that are installed in a rotating cylinder, thus putting them in the handgun category. Moreover, pistols are self-loading, semi-automatic handguns. You can't get that kind of convenience or performance from a revolver.

Pistols, like the ones we reviewed here, are friendly to carry, making this type of handgun a better choice than most revolvers if you're looking for a concealed carry weapon. This post includes the best handguns for beginners, while ladies should check out this article. 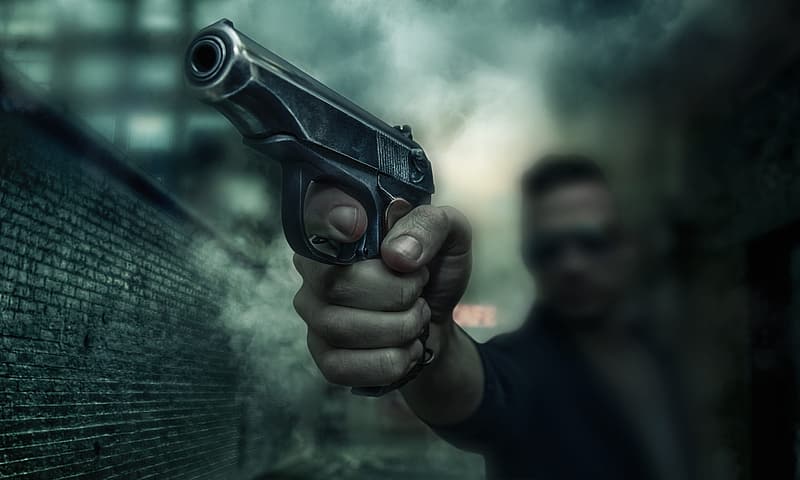 Examples of Pistols and Handguns

To see where these terms differ in real-time, let's take a look at a few notable pistols and handguns.

Springfield XD pistols are quite popular in the United States. These dependable pistols are available in a number of calibers and sizes and are extremely popular with shooters of all shapes and sizes.

If you're looking for a solid concealed carry handgun, the XDS Mod.2 is very thin and compact. You can get it in either 9 mm, .40 SW, or .45 ACP. On the other hand, if you are looking for something with a more "gun," you can choose XD-M Elite. 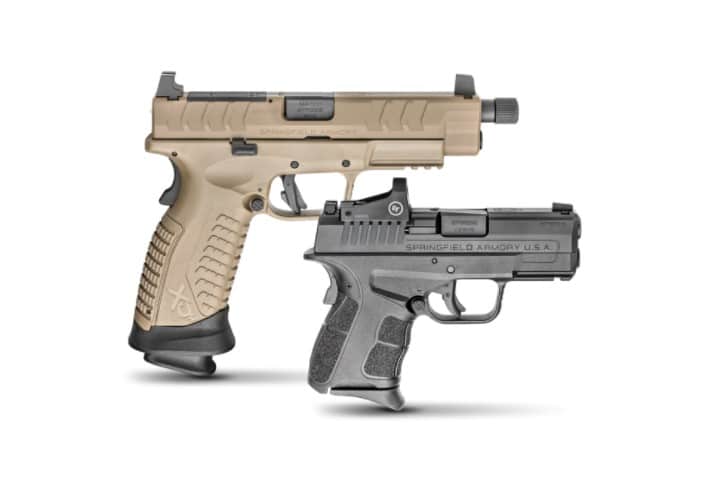 It's a noteworthy handgun thanks to its extremely coordinated trigger. So much so that professional shooters trust them. The XD-M Elite is only available in 9 mm, however. You can also find XD-E, XD-M, and the basic XD line. Whether you are a beginner or an experienced shooter, the Springfield XD series has created a series with outstanding comfort, durability, and ease of use.

The Ruger LCP is a single-stack pistol that is easy to conceal and is a very popular concealed carrying gun. In fact, it's my personal carry weapon of choice. I've owned and used this pistol for years, and never once has it failed me. In fact, I picked it up shortly after its initial release back in 2008. 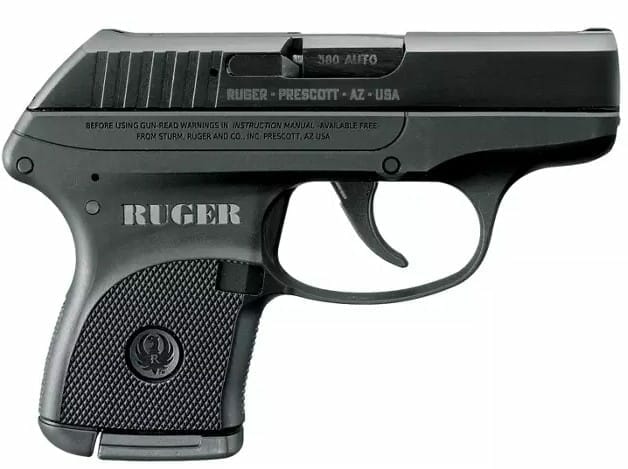 This small.380 semi-automatic shots with pinpoint accuracy and is a delight to operate. I'd recommend this pistol to anyone new to firearms. You will not be dissatisfied with the way it performs.

The Glock 19 is easily one of the most popular handguns you can buy in the United States. It is unquestionably durable, reliable, and accurate.

From beginners to seasoned shooters, the Glock 19 is an excellent fit for and skill level. 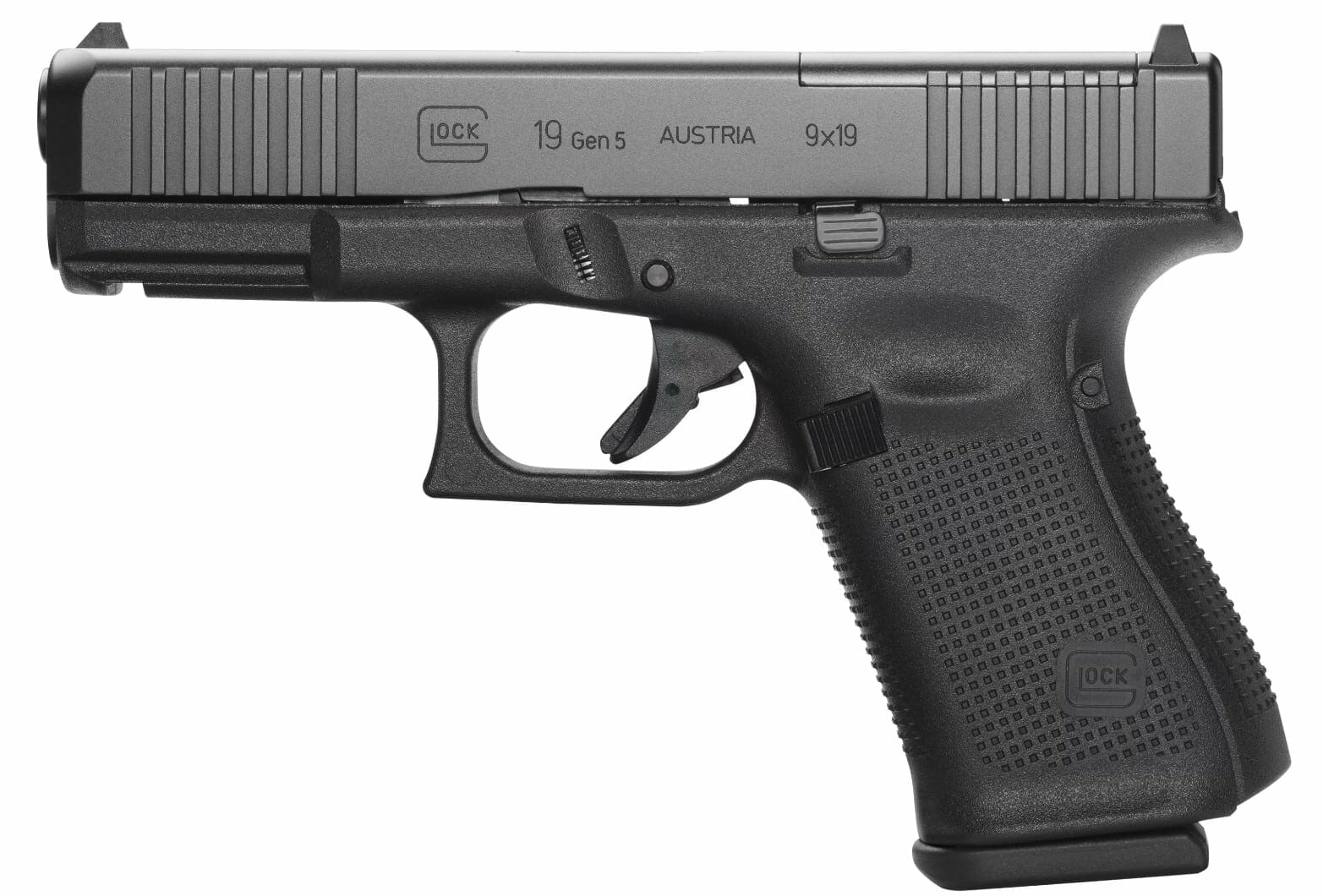 Not only that, but it's completely configurable. Adding optics, larger magazines, lasers, or any other accessory is possible with the Glock 19.

Ruger's GP100 is a full-size revolver that is very popular in the The United States. It's available as a double-action revolver, with either 6, 7, 8, or 10 rounds. Depending on how much firepower you need, you can use a variety of calibers, including .22LR or larger, such as .357 Magnum and 10 mm auto. 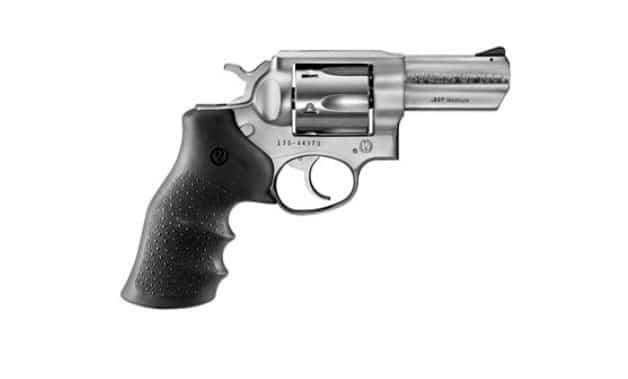 These handguns have a modern style and high reliability. The GP100 is very reminiscent of the weapon famously used in Dirty Harry. It's a stellar firearm that is understandably one of the best-selling revolvers available today.

This handgun holds 30 rounds of .22wmr. If you want a pistol that's reliable and easy to target, the Kel-Tec PMR-30 is an excellent choice. They are ideal for people who want something that's lightweight and easy to carry. 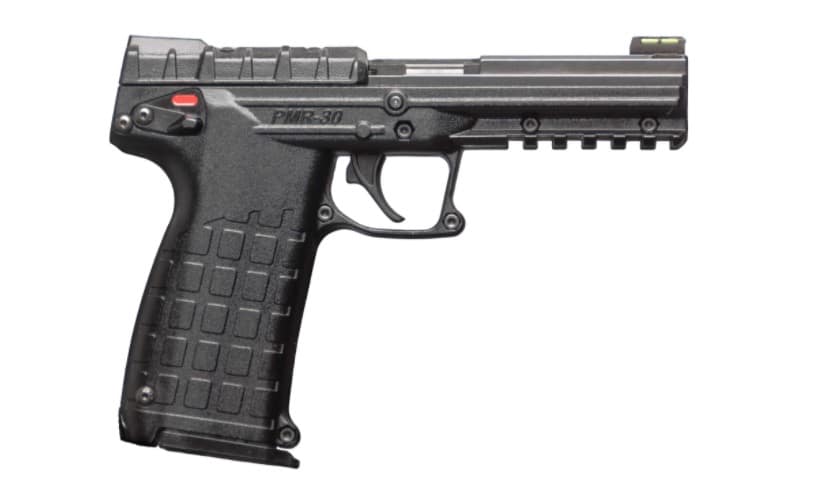 What's more, the Kel-Tec PMR-30 is known as having some of the lowest recoils around. As such, you're treated to smooth, accurate shooting. Perhaps most impressive, though, is its incredible capacity. As I mentioned at the start, this pistol holds 30 rounds, making it one of the highest-capacity handguns in its class.

Last up is a compact revolver that is very popular among concealed carriers. Its 5-round capacity might be slightly limited compared to the norm, but there's no denying its ease of use and simplicity. As such, nearly anyone can pick up this handgun and use it. 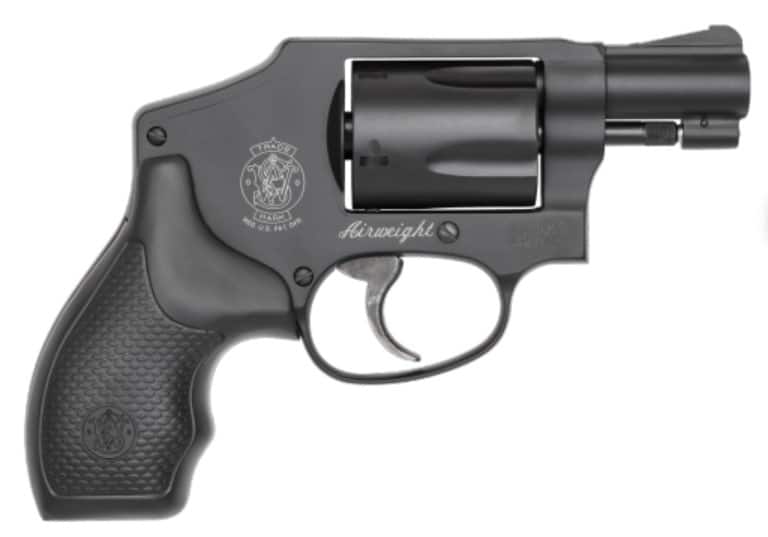 The lower capacity can take some getting used to, even if you're proficient with traditional 6-shot revolvers. But once you get acclimated to it, the Model 442 is a reliable choice for gun owners.

Now that you have a better understanding of how guns are categorized, you should have an easier time telling which is which. Just remember, you can interchange "handgun" and "pistol" without issue. But revolvers must stay within the handgun category and never the pistol category.