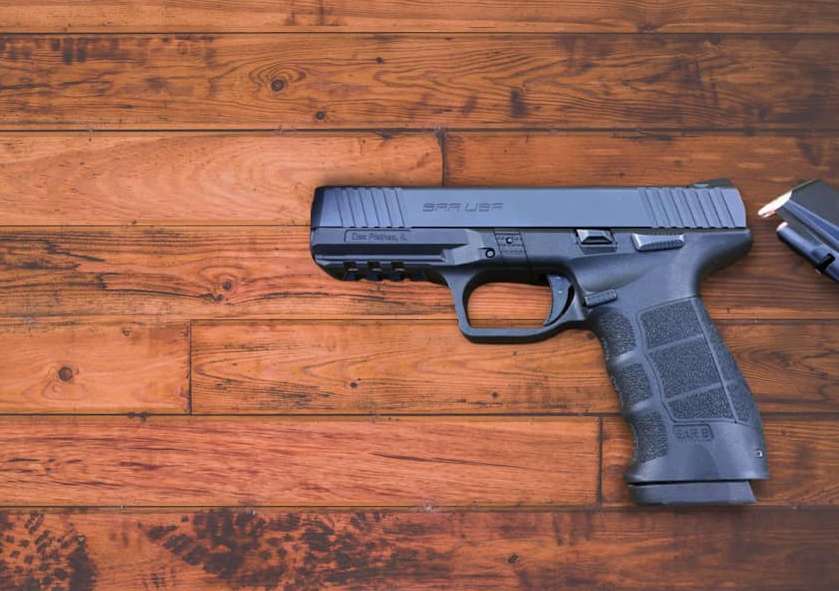 If you are a gun enthusiast like me, you know how it feels to get your hands on a new firearm from a world-renowned brand. If SAR9 9, a product of Sarsilmaz, is the new firearm, get ready for a special treat. Chambered in a 9mm, 17-round magazine and trigger safety, the SAR9 9mm perfectly balances between micro and full-size pistol.

My SAR9 9mm review closely examines features that make the firearm stand out from the competition. You will understand why I find it one of the most rigorously tested pistols ever produced and why it is among the collection of NATO and elite forces worldwide.

With so many concealed carry guns that offer garbage in design, features, reliability, and usefulness, SAR9 9mm manufacturers did a fantastic job with this concealed carry. The weapon has everything a new and experienced shooter needs, making it the most desirable pistol on the market. Read this 9mm gun review that will give you a pretty clear idea of its performance. 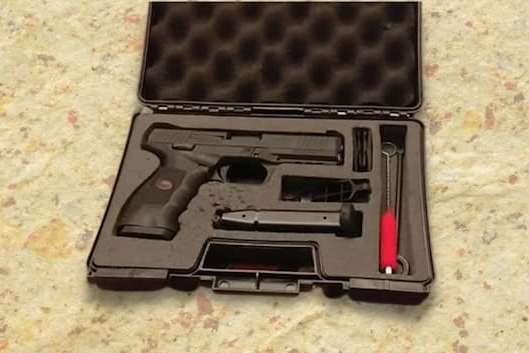 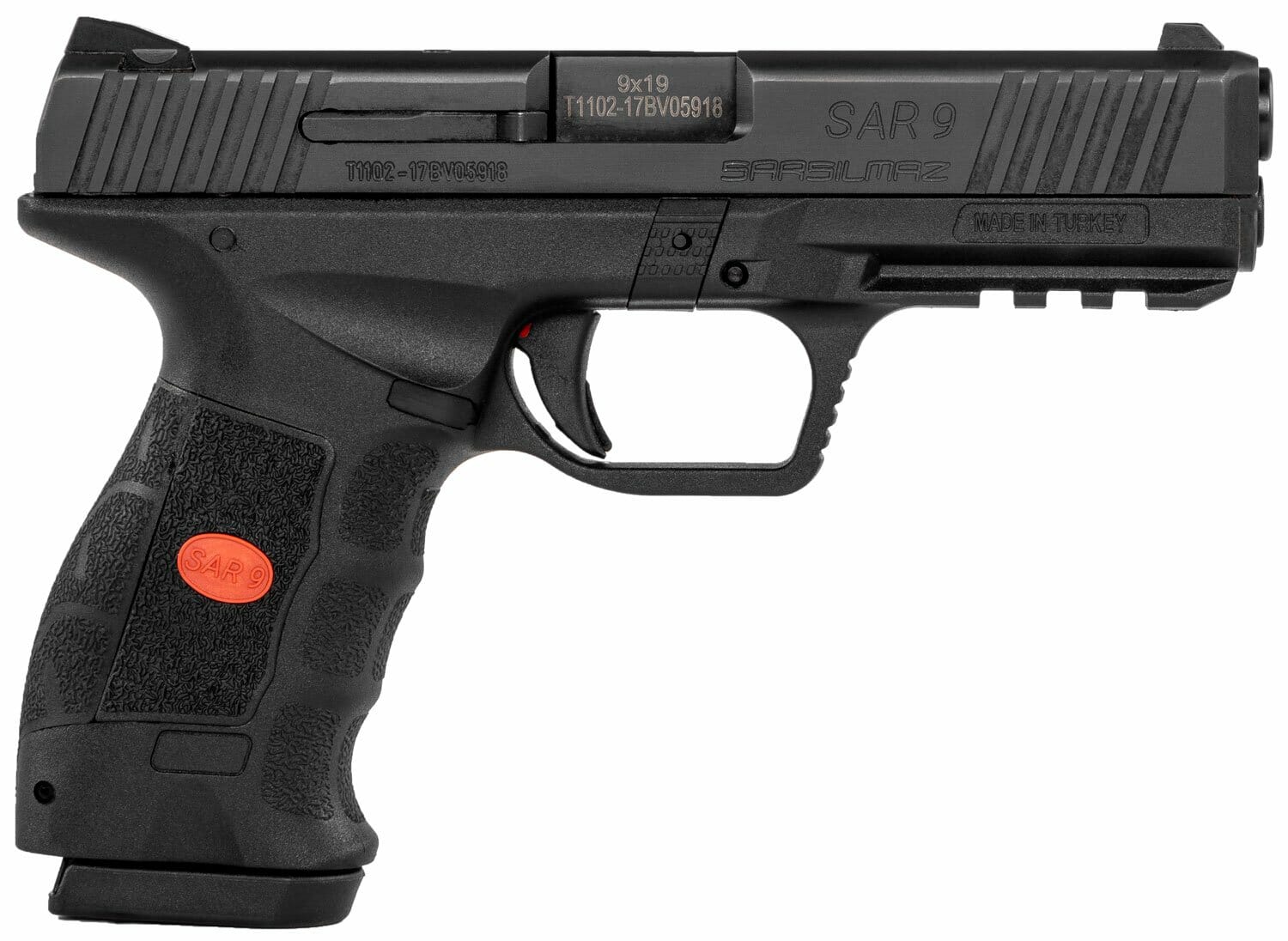 The pistol's polymer frame is an outstanding modular grip design feature. The trigger guard is undercut and rounded as it meets the grip frame for added comfort. The deep groove design enables the thumb and trigger finger to reduce the trigger and magazine release.

The pistol's grip panels and front strap finger grooves provide moderate wrapping and comfort. The shelf under the slide release prevents the thumb from accidentally bumping into the path during recoil.

The pistol comes with three swappable backstraps(small, medium, and large) and an additional two sets of grip panel inserts marked right and left. I found these features exciting since they gave me a modular grip that perfectly fits my hand. The 0.16 inches front and rear sight notch were excellent features for target shooting, and fast firing since the high center of gravity brought the sights back to the target quickly. 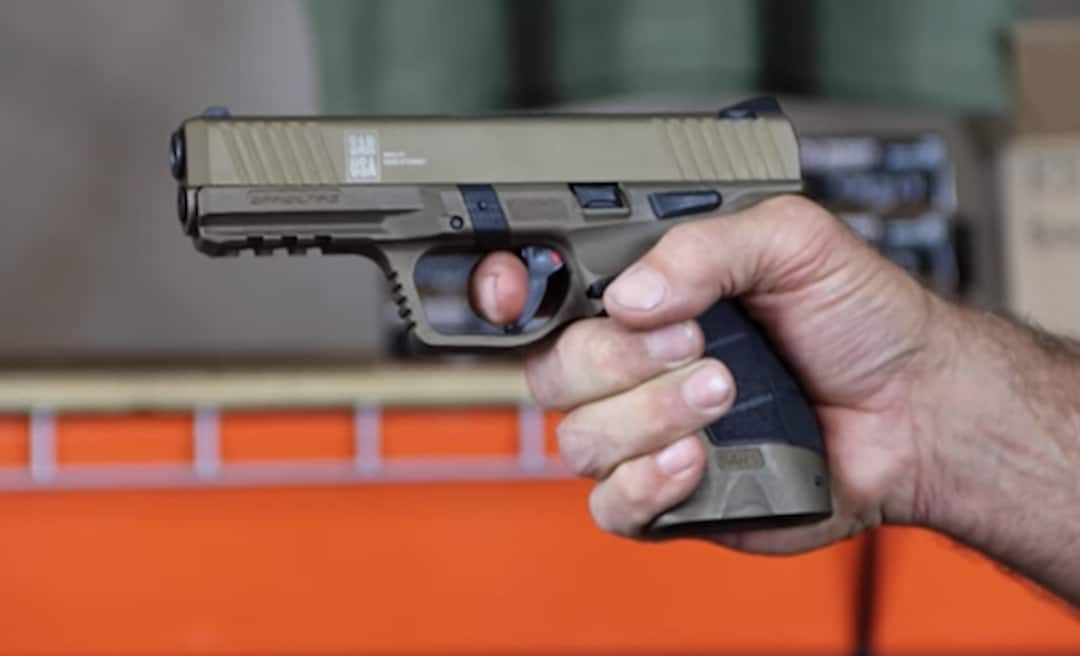 The gun also has exceptional thumb safety that does not lock the slide. It offers a lot of ease when inserting the magazine and cycling the slide to the chamber with the thumb safety in a safe position. The magazine catch, a narrow rectangular tab below the trigger, also stands out. Its strategic position on a raised rib in the grip contour protects it from my hand, making it easy to hit.

I find the safety trigger smoother than a double-action revolver, making it a safe pistol to carry with a round in the chamber. The trigger feature has a firing pin block that prevents inertial discharges in case the gun is dropped onto the rear of its slide. The trigger also has a visible red insert labeled "striker status indicator" that enables gun users to see when the striker is cocked and the trigger ready to be pulled.

The SAR9 9mm has a steel single-side release and is serrated on the top. The slide is big enough and allows users to quickly drop on an empty magazine using normal thumb pressure. The reversible magazine release is rectangular and has raised squares for added texture. The gun also has cutouts on both sides of the frame, making it easy to strip out stuck magazines.

SAR9 9mm is manufactured by Sarsilmaz, a privately owned aerospace, ammunition, and firearms manufacturer based in Duzce, Turkey. SAR9simaz was founded in 1880 in the Ottoman Empire by Abdüllatif Bey in Elazığ and started as a producer and repairer of flintlock rifles.

Sarsilmaz’s dominance in aerospace has seen them produce some of the best striker-fired pistols, one being SAR9 9mm. However, SAR9 USA is the exclusive importer of firearms in America. Launched in 2018, SAR9silmaz brought their innovation and quality out of Turkey into the USA.

A review by gun digest shows that the two companies work hand in hand to develop new firearms made explicitly for the American market. The firearm production factories on American soil are set to start in 2022.

Is SAR9 a Good Gun Brand?

The success of Sarsilmaz as a reputable brand that has seen the success of SAR9 9mm lies in its production capability by international standards. Their firearms have undergone rigorous testing, including NATO, and have bagged several certificates due to their quality in production.

Sarsilmaz invested heavily in a state-of-the-art manufacturing plant with high production capacities. It incorporates high-end production software, eleven-axis mills, and robotic cells to eliminate errors and safeguard its place as the best firearm manufacturer in the world.

Another thing that has made Sarsilmaz a reputable brand is its customer-centered approach. It holds the feedback and demands of its elite professional shooters in high regard. As a result, it updates its existing firearms and develops new ones in line with customer data.

For instance, the SAR9 9mm review shows that the polymer-framed pistol offers a Glock-like performance and has excellent ergonomics at an affordable price. It caters to customers who want high-performance guns at a friendly cost.

Is SAR9 Ammo Any Good?

Their premium ammunition line produces SAR9 9mm NATO composed of a full metal jacket projectile. The feature makes the ammo resistant to damage and offers accuracy when hitting the target. The ammo also has a brass casing, offering the perfect balance of strength and flexibility. The casing also allows SAR9 9mm to expand under pressure while in the chamber with its integrity intact.

SAR9 ammo also comes with a Weather Sealed Boxer Primer that offers shooters ease when reloading. Its weather resistance property makes it ideal for any climate condition. The ammunition comes in a 50-storage box.

Is SAR9 a Glock Clone?

No, the SAR9 is not a Glock clone or a copy of any other pistol. It, however, has a slight resemblance to Glock. It is believed that the Turkish government approached SAR9silmaz and requested them to manufacture a gun that looked like a Glock. Their military considered Glock their standard pistol, and the government seemed pleased.

Sarsilmaz took up the challenge and made SAR9 a pistol that resembled Glock but with better performance. SAR9 has undergone rigorous testing, including NATO. It is believed that SAR9 underwent 90,000 round tests and exceeded the performance of other pistols from big manufacturers in America, Austria, and Germany.

SAR USA also stated that SAR9 was tested and found to last up to 150,000 rounds and saw the firearm get an NSN award and a NATO test documentation.

Similarities Between SAR9 9mm and Glock

Both firearms have a reversible magazine release. The trigger on the SAR9 is the same as the one you find in Glock. However, the SAR9 trigger has an improvement in terms of feel and function. Both firearms are also tactile and audible during the reset trigger.

The internal parts of SAR9, such as the 4.4 barrel and recoil spring, are very close to those you find in Glock. However, none of the components are interchangeable with Glock parts. 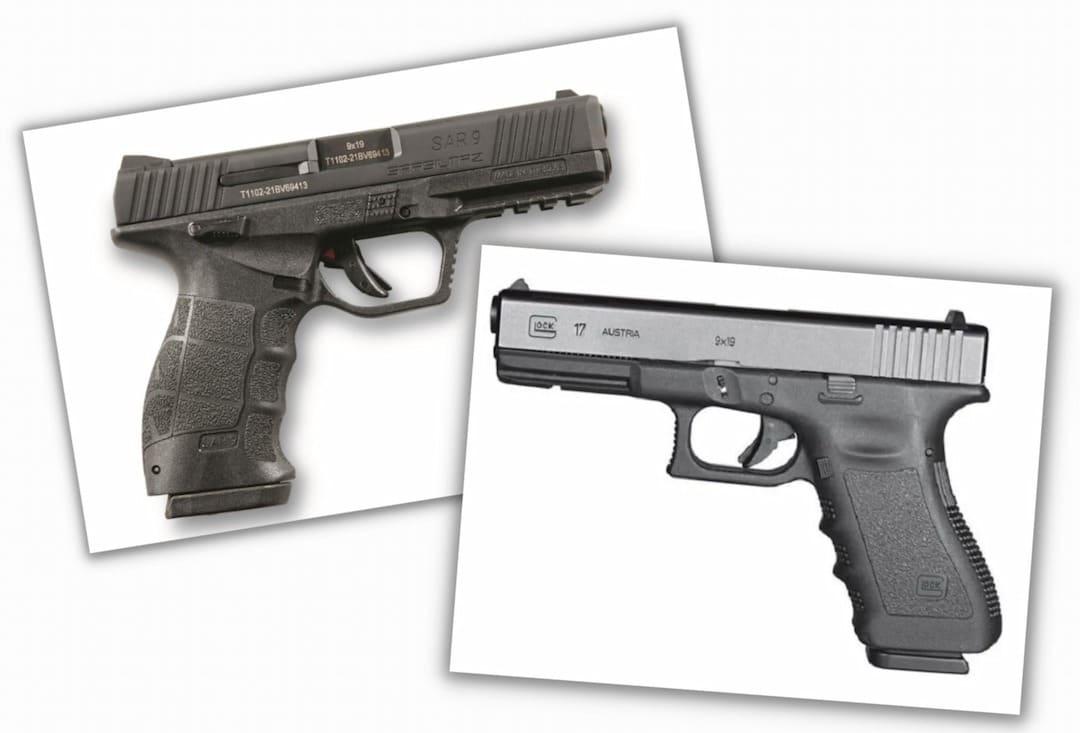 Which Ammunition Can One Shoot Out of SAR9?

The ammunition that the manufacturer recommended shooters shoot out of SAR9 is those with NATO specifications. The NATO specs pressure version is slightly higher than most 9mm cartridges hence safer to fire. SAR9 warns shooters that the SAR9 9mm warranty becomes void if one fires remanufactured or reloaded ammunition through their firearm.

What Magazine Does SAR9 Use?

SAR9 9mm has an optimal magazine capacity of 17 rounds. The firearm comes with two steel magazines with a high-tech polymer that prevents it from deformities.

Does the SAR9 Have Safety Measures?

Yes. The SAR9 has safety measures and can be carried, cocked, and locked with the thumb safety engaged. The thumb safety prevents hammer strikes to the firing pin in case the sear and hammer disengage before pulling the trigger. The lever is another active safety measure that securely lowers the hammer from the single to double action position without engaging the trigger.

What Military Use SAR9 9mm?

The military that uses the SAR9 is the Turkish Armed Forces, National Police, and other NATO partner countries. The military-grade pistol offers shooting comfort, accuracy, and reliability, which is why Sarsilmaz has become the biggest supplier for NATO countries.