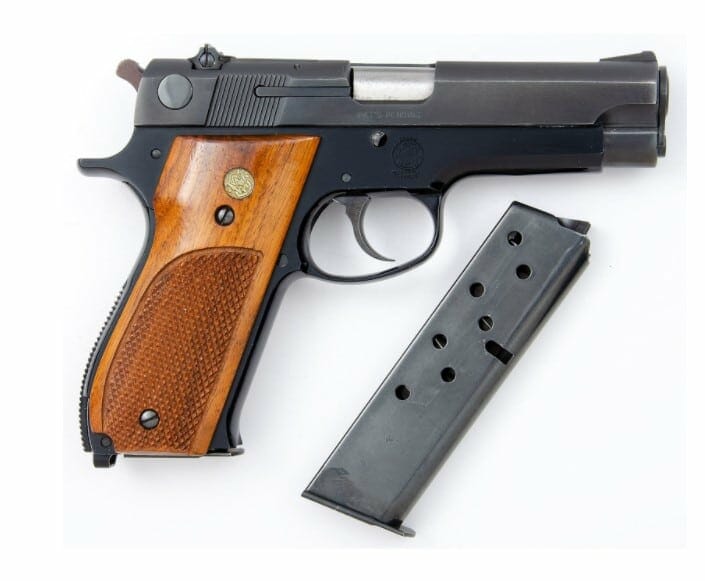 Smith & Wesson is one of the most popular gun manufacturers in the world. Even its early firearms hold up well in modern times. The Model 39-2 is one such weapon that continues to be appreciated by all who carry it.

If you want a piece of history in your gun collection that stands the test of time, the S&W39-2 will serve you well. I'd like to share my thoughts on this classic firearm so that you'll have a better understanding of why it is such a well-liked weapon. Nevertheless, you can still check out the best 9mm pistols we compiled for you. On the other hand, if you are just buying into handguns, take a good look at our best first handguns options. We also reviewed perfect handguns for women and tried to find out the best option to feel safe at home, to boot.

Before we jump into the particulars, I believe a short history lesson is in order.f

The Smith & Wesson Model 39-2. It's a reliable gun with quite the history behind it. Following World War II, the United States military started looking for a new 9mm service pistol to replace the revered Colt 1911. Smith & Wesson answered this call to action and got to work on the Model 39. While here, why not check out on this budget-friendly handgun from the same maker in our Smith and Wesson 5906 review.

You may recall hearing of a time when our Navy SEALs used a firearm known at the Hush Puppy. This was, in fact, a modified version of the Smith & Wesson Model 39. The changes in the 'Pup were an added suppressor and a modified slide lock.
The slide lock was changed to prevent it from sliding back after firing. This, along with the suppressor, helped reduce noise exponentially. Thus, the Hush Puppy was born.
So far so good, right? You would certainly think so. But, because of financial principles, the U.S. military lost interest in the S&W 39 and went back to using the Colt 1911. This was a somewhat confusing turn of events, as the S&W Model 39 was considered a revolutionary handgun at the time. 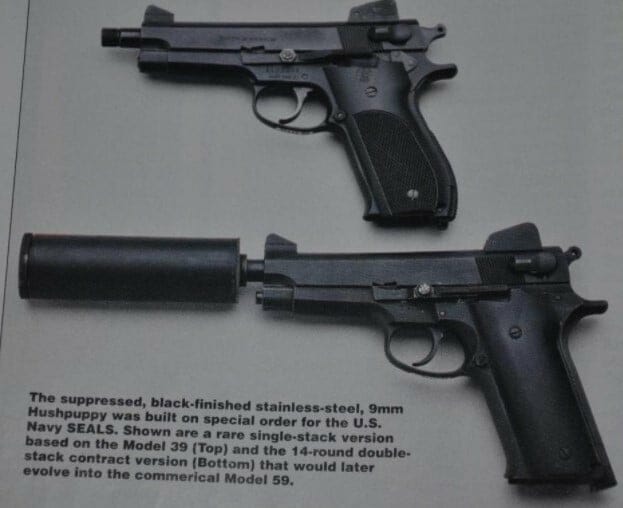 It boasted an aluminum frame and weighed in at a ground-breaking 28 ounces. As a lightweight single-stack semi-auto 9mm pistol with an aluminum frame, the Smith & Wesson 39 seemed to have it all in terms of build quality and construction.

Admittedly, it lacked the polish found in other firearms, but you couldn't argue with its performance. Rough as it looked, the Model 39 delivered a solid shooting experience. After the military switched back to using the Colt 1911, Smith & Wesson released its new Model 39 to the public in 1955.

What was it that made the S&W39-2 such a beloved pistol? As you will soon learn, it boasts all of the hallmarks of a well-designed weapon. Fast-forward to modern times and the Smith & Wesson 39-2 still holds up well.

It remains a classic piece that enjoys many of the same features as the original Model 39. However, Smith & Wesson made sure to implement improvements where needed, resulting in a familiar yet polished update.

The semi-automatic S&W39-2 sports a de-cocker on its left side. This is notable for being different from the ambidextrous de-cockers found on most 4-digit S&W guns. The slide is crafted from carbon steel, ensuring longevity and reliability. 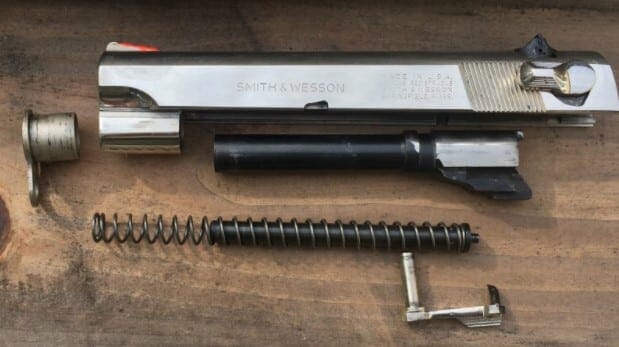 The frame of the S&W39-2, however, is made entirely of aluminum. The aluminum frame is a welcome feature that carried over from the original Model 39 (although there was a steel frame version available).

This decision was made to help maintain the overall reduced weight of the pistol. Following in the footsteps of the Model 39, the S&W39-2 features the same weight, clocking in at a slim 28 ounces.

On that note, first, let's take a moment to observe the Model 39-2's specifications.

The barrel is very similar to that of the Colt 1911's. It is made out of carbon steel and is polished as such that it resembles stainless steel. There is a barrel bushing present at the end of the slide, which again, is just like the one on the Colt 1911.

There are no two ways about it; the barrel is simply stunning. It only further adds to the allure of the pistol. And when you factor in the classic grips (more on that in a second), you've got a fantastic-looking firearm.

Measuring 4 inches, I find this gun to offer the perfect balance. It still feels good the hands, regardless of any shortcomings. 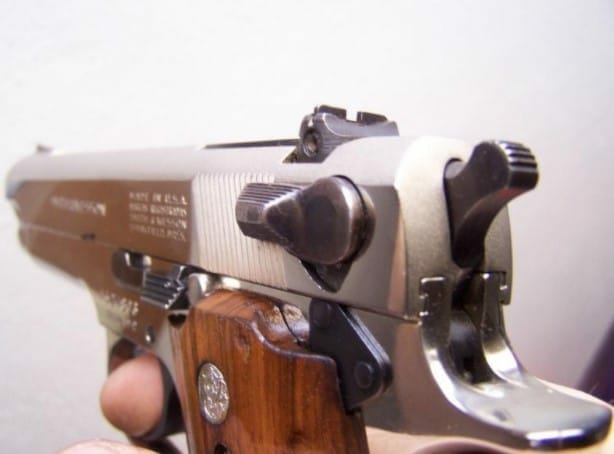 The sights are all-black, with the low-profile rear being adjustable for windage while the front is fixed.

I'll be the first to admit that the sights don't hold up well by today's high standards. But considering the time that this pistol was produced, they were certainly acceptable back then.

Checkered walnut makes up the grips on the S&W39-2. The grips feel solid and provide exceptional handling and control. If you want to add a pistol to your gun collection that looks classy, the 39-2 definitely fits the bill.

You can't fully appreciate what the grips do for the S&W39-2 until you hold this pistol in your hands and fire the shot. The grips are a work of art that is much more than just looks. The fine detail throughout holds up well today and is sure to leave you impressed all these years later. 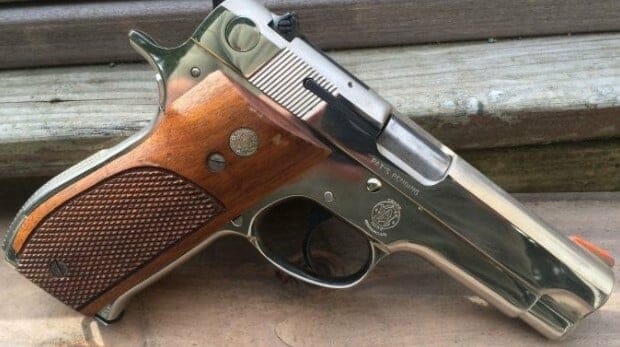 The magazine capacity is a standard 8 rounds. When the S&W39-2 was first released, it came with two magazines, each holding 8 rounds of ammunition. The design and construction of the original magazines feel rather archaic, but they get the job done.

Here's the thing when shooting this semi-automatic pistol: it doesn't feel all that dated. I know that it has plenty of years behind it. But you would be surprised at how well it shoots. It remains one of the more serviceable semi-automatic pistols from yesteryear and is remarkably accurate, all things considered.

The S&W39-2 and Law Enforcement

It's interesting to note that for the first several years of this gun's existence, law enforcement barely batted an eye at it. During that time, revolvers were all the rage. Pistols were seen as being unreliable and underpowered.

This is especially true when speaking about 9mm handguns. And in the field of law enforcement, the need for power and efficiency reigns supreme. Had the S&W39-2 been a larger caliber pistol, there's a good chance that it would have gotten more attention than it did.

While most law enforcement passed on the gun, there were some plain-clothes detectives that regularly carried the S&W39-2.

I'll agree that there are much better semi-automatic 9mm pistols out there for the shooting. But I do like the overall feel and balance of the S&W39-2. Sure, it's a bit clunky by today's standards. But we're talking about a historic piece of weaponry here.

There are bound to be some inconveniences, especially when you're used to firing modern pistols. The single-action and double-action functionalities feel a bit janky at times. But the more you shoot with it, the more natural it becomes.

I'd be remiss if I didn't take a moment to cover the trigger. If there's one area that is sure to prove bothersome for some people, it's definitely the trigger.

When firing double-action, you will need to provide nearly 12 pounds to complete the trigger pull. And for single-action, you're looking at just over five pounds. If you aren't comfortable with firing older guns, it may take a while to get acclimated.

Most people who invest in this semi-auto pistol are likely to do so solely to add a third-generation weapon to their arsenal. But make no mistake; this Smith and Wesson firearm can still hold its own if you ever need to use it.

If you're interested in the S&W39-2, you will likely need to do some searching to find one for sale. These pistols are still floating around out there and in varying degrees of quality. Models that have seen better days can easily go for upwards of $300.

But if you want one that's in really good condition, be prepared to fork over $1,000 or more. Keep in mind that these guns were used by a variety of people and from all walks of life. You may need to wait until the right one comes up for sale to get your hands on a quality S&W39-2. 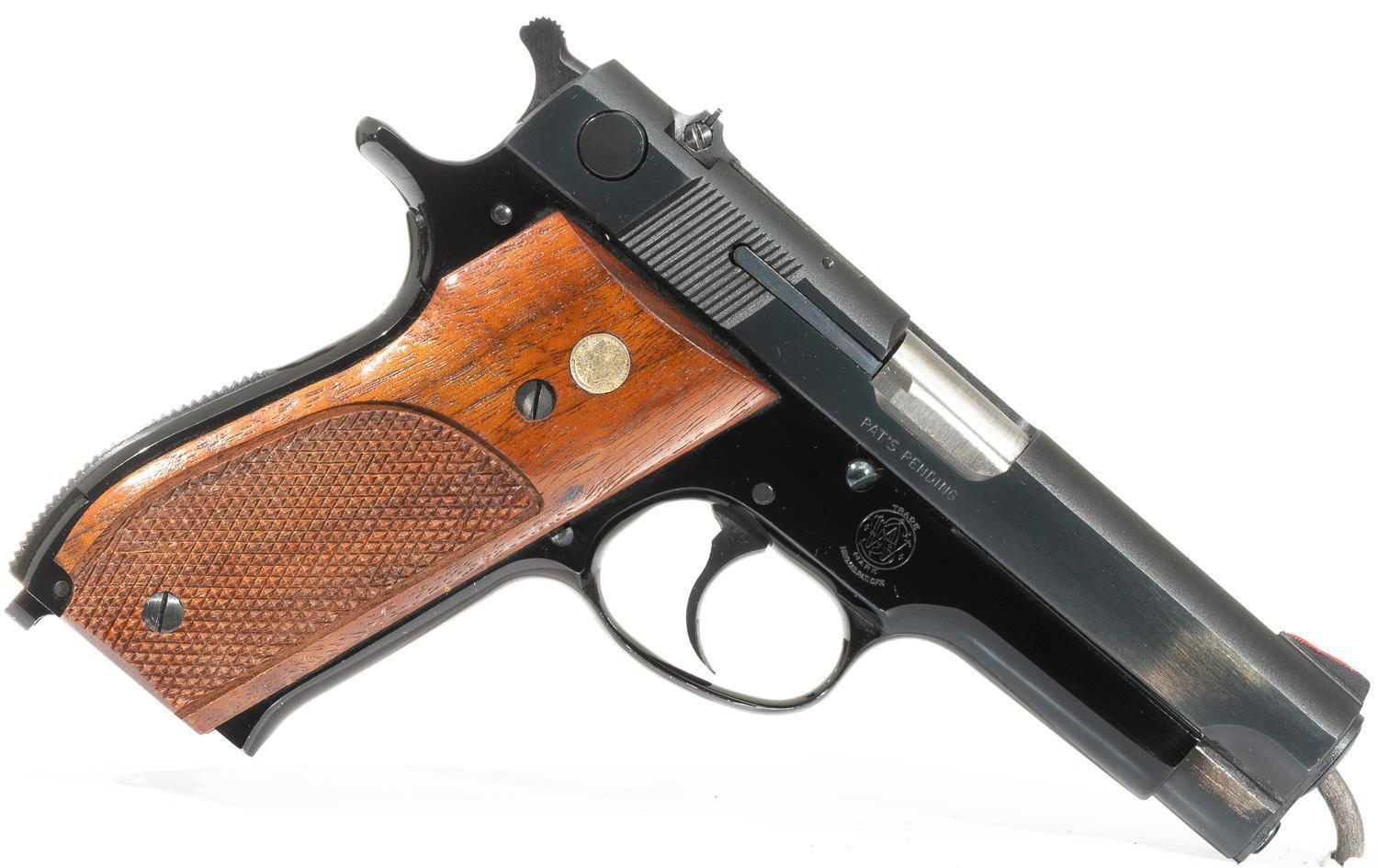