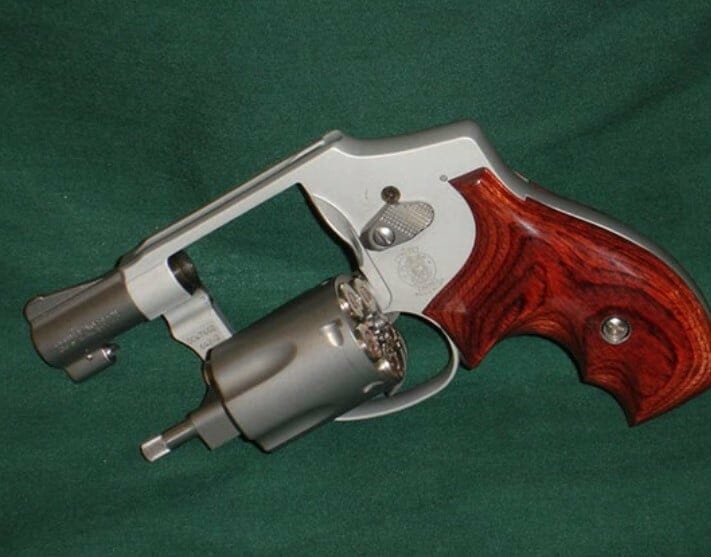 Smith and Wesson's Performance Center 642 is a curious entry. In today's modern landscape of bigger and better, you have to wonder if this pint-sized snub-nose is still relevant. I recently had the chance to spend some time with it so that I could fill you in on the lowdown. As a concealed carry, its smaller stature certainly fits the bill. But what about for home or personal defense? And for that matter, how does it fare on the range? Everyone usually has a lot of questions about this revolver, and I aim to answer all of them. So sit back and enjoy my insights into Smith and Wesson's legendary 642. In addition, check out the similar Glock's 43 pistol in this post, or how S&W 642 compares to Ruger LCP II. Moreover, we give you the best revolver selection to choose from in this review.

First things first. J frames are still huge sellers among gun owners. There are a lot of reasons why someone might want to own a revolver that only holds five rounds. This five-shot beauty is perfectly sized to be a daily carry gun. Factor that into the history of the S & W model 642 and you're looking at a sound investment for self-defense. You will find more great self-defense guns in this post, or you can opt for a similar compact Smith And Wesson Shield 2.0. You will also find an updated version of a legendary gun from the same manufacturer in our Smith and Wesson 39-2 review, or their famed budget-friendly handgun here.

Before we delve any deeper, let's explore the specs of this J frame to see what all it is packing.

The Performance Center Smith & Wesson Model 642 is certainly humble in its features. But that's not to say that this isn't a worthy contender. Being a 642 Airweight, you're getting a lightweight revolver that is equipped with an aluminum frame and stainless steel cylinder that is cut for moon clips.

What are moon clips, you ask? A moon clip is just a piece of metal that is shaped like a star or ring. This allows the revolver to hold multiple cartridges together as one unit. This serves the purpose of allowing for simultaneous insertion and extraction.

This light weight revolver is chambered in 38 Special, ensuring that you'll have plenty of firepower at the ready should you need it. J frames have been one of Smith and Wesson's specialties for many years. Introduced about 70 years ago, these guns have been on the market for quite some time.

The Model 642 is one of the most popular gun models they carry, with plenty of history and experience to back it up. Initially, Swith and Wesson only had two frames available. Although they weren't referred to it at the time, they have since become known as I- and K-frames.

This was done in a move by Smith and Wesson to shorten the names of their gun selection. As their inventory grew, the need for catchier names became more necessary. When the 1950s rolled around, Smith and Wesson introduced the J-frame to the market and has since been one of their best sellers.

Although there are several S & W gun models to Harry the J-frame designation, the Performance Center Model 642 remains their most popular of them all. This is likely because the Smith/Wesson 642 is actually an upgraded version of their classic Model 42 Centennial Airweight.

Unlike the Model 642 and its concealed hammer, the 42 Centennial comes equipped with an enclosed hammer. What's the difference? Enclosed hammers aren't accessible to the shooter. That says to me that you will be shooting this gun double-action-only. A concealed hammer allows the shooter to access the hammer. However, it is very limited access, making single-action shots possible.

One of the most common complaints that I hear about the concealed hammer is that debris can easily get into the shroud and mess up the hammer. With an enclosed hammer, though, that isn’t really a concern. With that being said, you had better be handy in firing in double-action-only shots.

As a snub-nose gun, the stainless steel barrel is incredibly short. I like that the cylinder and crane are stainless steel, as well. This goes a long way in adding further durability and longevity to the gun. If you're looking for a robust little shooter that is tough as nails and capable of holding its own, the Performance Center Model 642 may be a great fit for you.

As long as you're comfortable with the shrouded hammer, you should find this Smith/Wesson to make a great concealed carry gun. Factor in the 38 Special rounds and you're dealing with a real heavyweight here.

What's the difference between Smith and Wesson 442 and 642?

Both of Smith & Wesson's 442 and 642 revolvers have years of history under their proverbial belts. As such, there has been a slew of variations on the J-frame theme over those years. But perhaps the most well-known has been the Airweight 642. The Smith and Wesson model 642 has definitely been a great seller for them. In fact, it is consistently at the top of their best-sellers list.

Both the 442 and 642 models are virtually identical except for the finish. Still, the S & W Model 642 remains the better seller of the two guns. So, what makes it such a home run year after year? For one thing, it gets everything right. It's one heck of a great personal defense weapon thanks to its lightweight body and easy concealment.

Factor in the 38 special cartridges and you're looking at a real winner. Although some shooters will understandably prefer to have an exposed hammer, I find this snub-nosed little wonder's internal hammer to be easy to carry. I can easily fit it in my coat pocket and forget about it. I reviewed more pistols for pocket carry earlier. 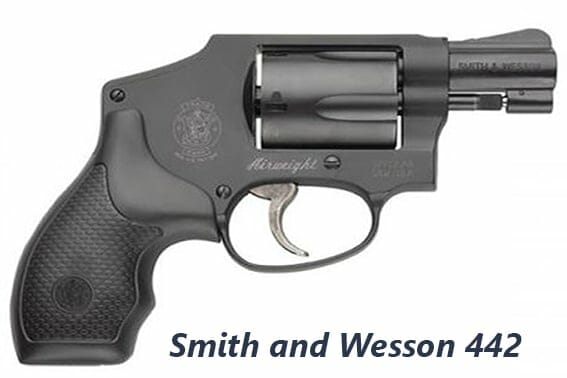 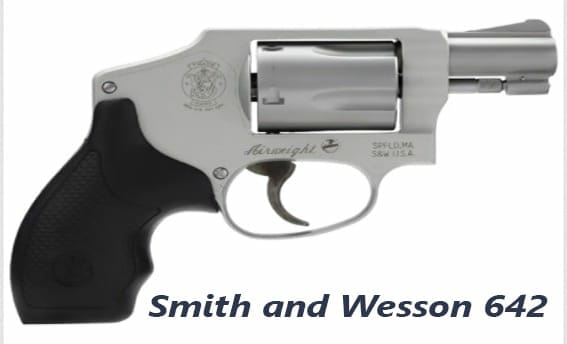 And thanks to its snag-free design, you don't have to worry about the gun getting caught on anything should you need to take it out in a hurry. To me, this is a huge advantage if you are ever caught in a sticky situation and need your gun in a jiffy. The overall design says a lot about the ability to easily carry this one.

That's not to say that the 442 isn't equally easy to concealed carry. I just find that the overall design of the Model 642 lends itself to the cause more so than the 442. And then there is the size difference between the two. The 642’s barrel measures in at 1 7/8 inches. And the overall length is barely over 6 inches.

It's true that the cylinder is a bit wider than what you'd find on most semi-auto pistols. But the design and shape make it easier to hide on your person. Furthermore, the Airweight 642 weighs in at just a little over 15 ounces (unloaded). To that point, it doesn't weigh a whole lot more when it is loaded.

I found this to be lightweight enough to carry around without it being a burden in the slightest. In my humble opinion, it is much better than the 442 for this purpose. I'd recommend adding a Crimson Trace Lasergrip, as it doesn't affect the overall frame size and is equally easy to keep on your person.

Shooting on the Range

Firing both the 442 and 642 proves to be an exercise in patience. You should expect to spend a great deal of time with the Performance Center S & W model 642, especially if you aren't familiar with or experienced shooting a gun of this caliber. I found both to take some serious dedication and practice.

I would recommend that you work your way to this kind of gun before jumping right into it. I really felt recoil on these babies, and that's nothing to play around with. Safety should always come first, no matter how badly you want to get your hands on a gun.

As a 38 P revolver, you would do well to familiarize yourself with these types of guns. On the range, I had a heck of a time getting acclimated to where I felt comfortable. I would shoot several rounds, only to find that my accuracy left a lot to be desired.

I can usually adapt to a pistol fairly quickly. But this revolver is a whole other story. Shooting takes education, training, and experience. Without any one of them, you could be risking injury to yourself or someone else. My time on the range didn't get much better, I will admit. And that says a lot about the experience needed to shoot these guns.

I like the Smith and Wesson Model 642, don't get me wrong. But shooting it at great distances is just not something I am currently able to accomplish in a respectable fashion. With that being said, I would venture to bet that there are plenty of gun enthusiasts who could put me to shame in no time.

I must admit that I'm not the biggest fan of the ramped front sight. The 1.875-inch barrel doesn't leave a lot of room for improvement, but I do believe they could switch to a tritium sight with little issue. They've done so on other J-frames, so I know it can be done.

As it stands, however, I believe you would do well to use this gun in conditions that are well-lit. Low-light conditions just gave me too much trouble with the current sight setup.

What is the trigger pull on Smith and Wesson's 642?

Make no mistake, this J-frame revolver isn't for the beginner shooter. To use this gun, you're going to need a great deal of strength of experience. The trigger pull is an astonishing 12 pounds! That in itself says a lot about who should use this gun.

And I will freely admit that I am not able to accurately shoot a gun with a trigger that requires this much pressure. I like the design and the weight of J-frame guns. But to shoot one is a completely different story. Unlike the single-action Model 640 revolver, there isn't as bad a recoil to deal with.

On the Performance Center S & W Model 642, however, you definitely feel every inch of this gun. Again, it's great as a concealed carry revolver. The size and shape make it a very special gun, indeed. But you're going to need plenty of experience with its trigger before you are able to effectively and safely use it.

You should also be comfortable with 38 Special guns. This revolver means business and requires a shooter who is capable of safely firing guns of this caliber.

In the end, I believe this revolver will make a great addition to the arsenal of a seasoned gun owner. It says a lot about the trigger pull as to who should invest in the 642.
Aside from that, however, you can't beat the build quality and overall design.

It's an incredibly well-made gun that stands the test of time. It's also understandable why the Model 642 has been such a great seller for Smith and Wesson for so many years. With quality and reliability like this, it's clear that the 642 will continue to be highly sought after. Plus, if it says "Smith and Wesson", you can trust that you're making a sound investment.

If you have any questions or comments, feel free to leave a reply. We'd love to hear your feedback!