What caliber is a Desert Eagle? The Desert Eagle, otherwise known as Deagle, is an automatic pistol modeled by Magnum Research, U.S.A. It's a large caliber gun with a flexible configuration supporting .357 Magnum, .44 Magnum, and .50 calibers. This gun has gained immense popularity due to its high caliber, appearance, and large size.

What Caliber Is a Desert Eagle? 3 Calibers Explained

The Desert Eagle is of three different calibers: .357 Magnum, .44 Magnum, and .50 calibers. It has a detachable magazine to support the three calibers. For instance, .357 Magnum has nine bullets, .44 Magnum has eight, and 50 Action Express has seven bullets. Let's discuss them in detail.

You can also call it 9×33mmR .357 S&W Magnum if in Europe. This caliber has a .357 -inch internal diameter. It has highly effective terminal ballistics, making it highly regarded by many.

This cartridge is superb in self and home defense, hunting, and metallic silhouette. You can use it to take down a bear, angulate, and other dangerous animals. Its smaller diameter means it has a high speed, making it excellent in penetration.

This cartridge is also called the .44 mag or .44 Remington Magnum. It has large bores and a rim, thus ideal for wheel guns—rifles with this cartridge use rounds with a .429 base diameter.

You can use this cartridge with a handgun. It can carry heavy and large bullets and shoot them at high speeds. However, on full power, it produces massive blasts and much recoil, making it unsuitable for police. Another downside is its massive size and power can strain users, especially those with smaller hands.

.50 Action Express has the same diameter as the .44 Remington Magnum cartridge. Therefore, if your gun has .50AE, you can quickly change to .44 Magnum by changing the magazine and the barrel.

The .50 Action Express desert eagle fires bullets at 1900fps muzzle velocity. This velocity is the same as shooting at 580m/s. It is ideal for self-defense, especially when confronted by large dangerous animals like bears. You can also use it for metallic silhouette shooting.

The desert eagle was introduced into the market in 1983 (Mark I Desert Eagle). The self-loading pistol, by that time, supported the .357 Magnum revolver. The gun was designed by Magnum Research Inc. and Israeli Military Industries (IMI).

John Risdall, the CEO of Magnum Research, played a key role in popularizing the Desert Eagle pistol. For instance, he convinced Hollywood's prop houses to use this gun in their movies. He ensured the gun features in almost all movies, ranging from action movies to crime dramas.

Two years later (1985), it featured in the year of the Dragon film whereby Stanley White, Mickey Rourke's Captain, carried it. It was also featured in the Commando with Arnold Schwarzenegger carrying it. The gun also did appear in Police Academy 2: Their First Assignment comedy.

The gun became more popular with popular TV shows such as The Equalizer, Miami Vice, the Sopranos, and Farscape. In addition, it was featured in more video games with Tomb Raider Lara Croft carrying it looking iconical.

While the desert eagle wasn't the first of its kind, its power and hyped popularity have made it outstanding. Thus, it is one of the most adored pistols in the world today.

As mentioned earlier, the Desert Eagle design supports different cartridges: .357 Magnum, .44 Magnum, and .50 Action Express. The .41 Magnum was introduced into the market but disappeared shortly as many shooters didn't like it.

Mark XIX is the latest model of the desert eagle rifles. Magnum Research develops it in America. Its barrel has an M1913 Picatinny rail that ensures efficient mounting of optics. The model is highly ergonomic, and changing calibers is easy. You only need to switch the barrel assembly, magazines, and bolt assembly to change the caliber. With the .50 Action Express and .44 Magnum being of the same rim diameter, changing between them doesn't require a bolt assembly switch. 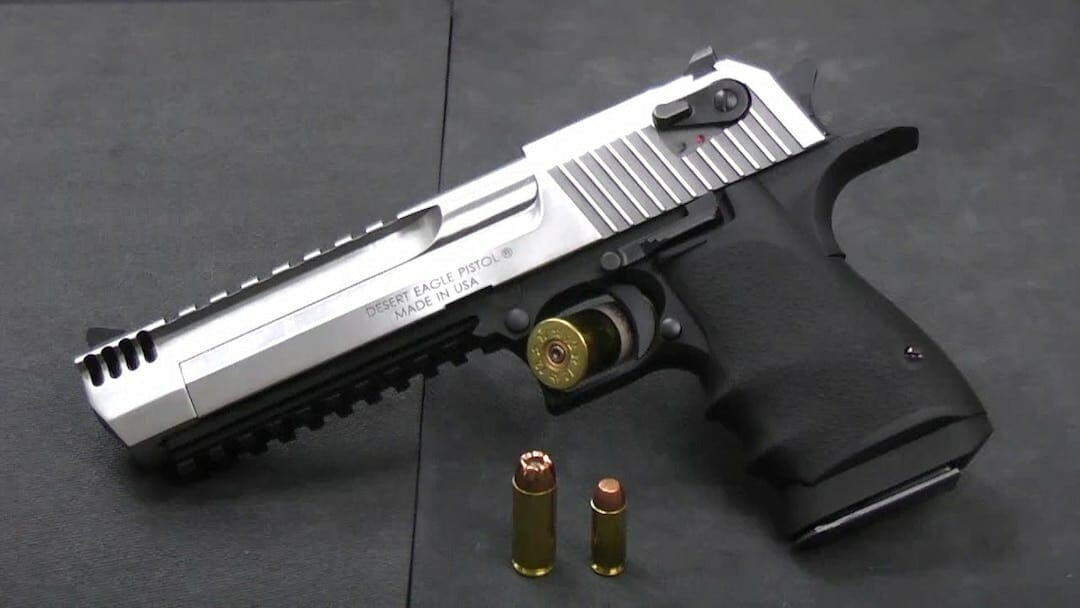 How About the Desert Eagle Working Mechanism?

The Desert Eagle is among the semi-automatic pistols with a gas-operated mechanism. Being a gas-actuated pistol with reliance on a rotating bolt piston is rare in the piston world.

This is how it works. When the bullet goes down the fixed barrel, propellant gasses on the underside of the barrel expand. This gas passes through the port on the barrel underside adjacent to the muzzle. The traveling gas finally strikes the piston pushing the slide assembly aside.

The bolt rotates from the cam pin action, causing the spring-loaded extractor to draw the empty cartridge out of the chamber. The spring-loaded ejector attached to the bolt spins the brass vertically, causing it to move outside the gun.

At this point, the slide assembly settles on the other end. The dual recoil springs, now compressed, push it back to the forward position. This action strips another round from the magazine and puts the round in place. The bolt head rotates to align with the locking lug recesses, causing the breech to lock. 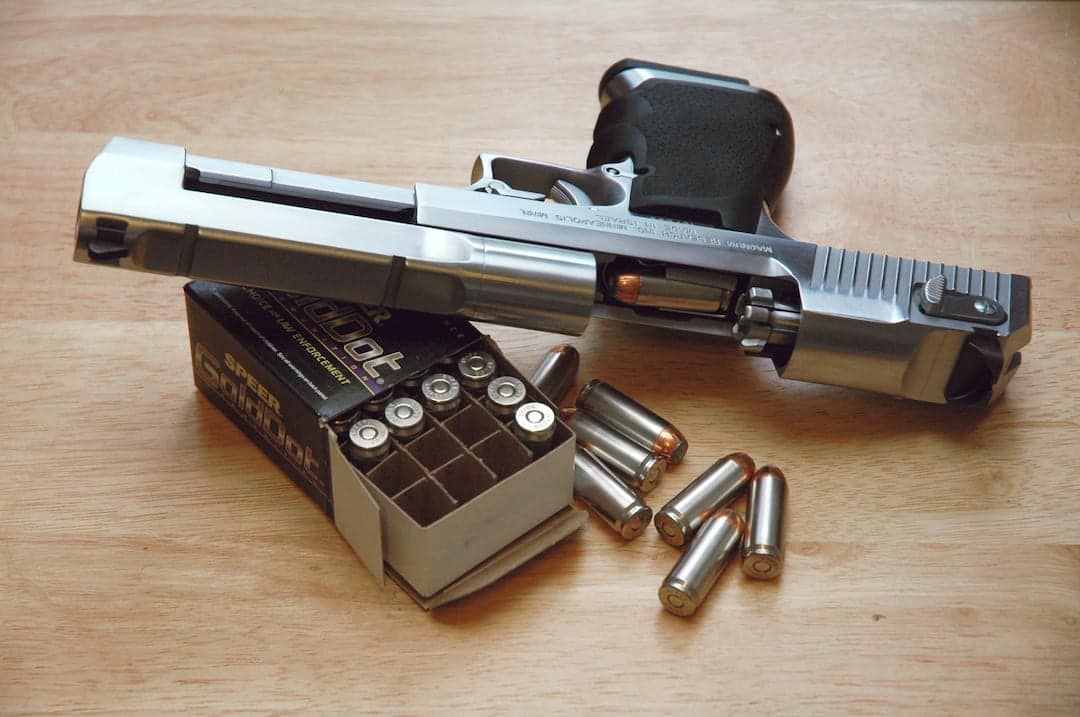 Desert Eagle handguns have different configurations. You can configure it to .357 Magnum, .41 Magnum, .44 Magnum, .440 Cor-Bon, and .50 Action Express calibers. Changing from one caliber to another is quick and easy. You only swap out the bolt assembly, barrel, and magazine. .44 Magnum and .50 Action Express are the only calibers that don't need the change of bolt assembly when shifting the configurations.

Is the Desert Eagle 50 Cal?

Yes, the desert eagle is 50 cal. Desert Eagle 50 AE stands for Desert eagle 50 Action Express. It is gas-operated, giving it enough power to shoot 50-caliber bullets. This design makes it less of a handgun and more of a rifle. At the gun range, it is more powerful than most pistons.

What Caliber Is Best for Desert Eagle?

The best caliber for the desert eagle is .50 AE. This cartridge has a 442 power factor, making it a powerful handgun in semi-automatic rifles. Other calibers, including .357 Magnum, .41 Magnum, .44 Magnum, and .440 Cor-Bon, are powerful but not as powerful as the .50 AE.

Is a Desert Eagle a 40 Caliber?

Yes, a desert eagle is a 40 caliber. A baby Desert Eagle pistol supports double and single action. Moreover, it has three calibers, namely, 9mm, .40 S&W, and . 45 ACP. You can get this pistol in a polymer or steel frame with a black finish.

What Bullets Go in a Desert Eagle?

The Desert Eagle has a detachable magazine that feeds in bullets. The. 357 Magnum has nine bullets, . 44 Magnum has eight, and .50 AE has seven rounds.

How Powerful Is a Desert Eagle?