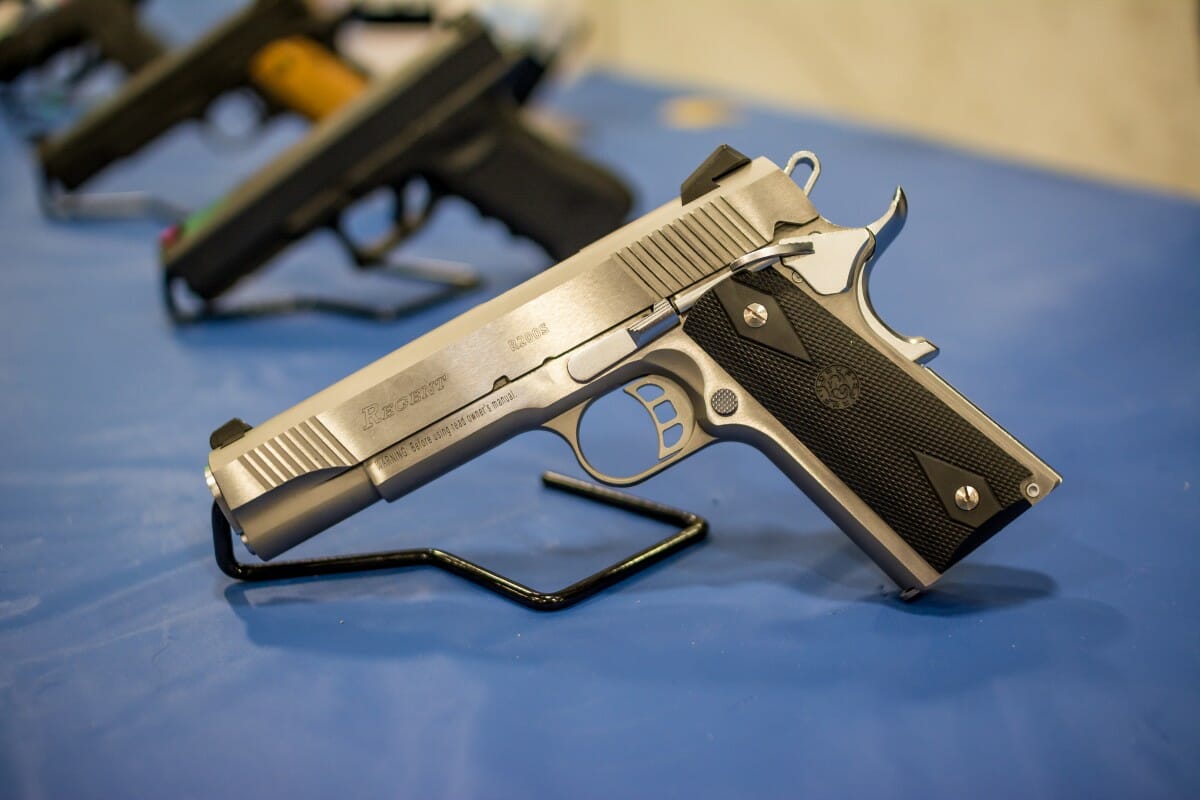 America has the highest number of gun buyers on the continent, and the gun sales numbers keep growing. The firearm industry is a billion-dollar business.

Consequently, manufacturers are kept on their toes to provide the best firearms in the market. Handguns have improved a lot from the time their production started. To stand out, the companies selling guns must be innovative and be up to date with technology because gun owners want the best.

On the downside, many of these best-selling guns are in the wrong hands, and gun violence has become a huge problem in the U.S. It is hard to know the number of guns sold because criminals buy on the black market.

Below we discuss the most popular handgun in America:

The Glock 19 is one of the most sought-after semi-automatic pistols in America. It was created by an engineer, Gaston Glock, and introduced to the market in 1988. It quickly became a favorite among police officers, the military, and private security firms.

It didn't take too long before civilians joined in. It is an improvement of the Glock 17 with a size reduction. The Glock 19 has a shorter barrel length (by about half an inch) and pistol grip compared to the Glock 17 caliber.

The Glock 19 started with Generation 1 and continued to improve through to Gen 5. Most people would recommend the 4 and 5. 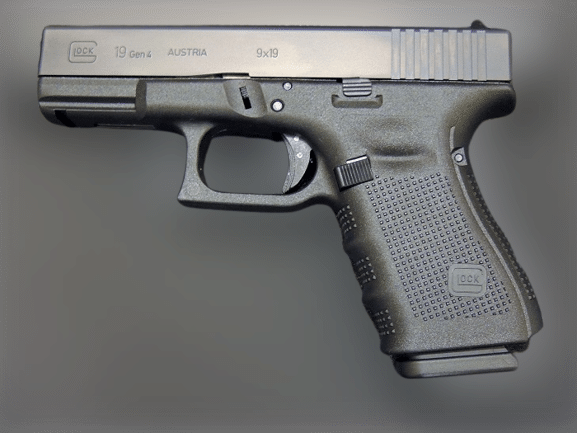 The features that make it so attractive include:

Glock 19 has a trigger, firing pin, and drop safety measures taken care of. The trigger safety prevents any misfiring. The handgun only fires if your finger intentionally pushes both the trigger and the safety at the same time.

The drop safety prevents the gun from going off because of pressure put on it other than your finger. For example, if the handgun drops to the ground or hits a wall, it will not fire.

The firing pin safety is the last shield you have. If the other safeties fail, the pin should stop the misfiring.

It is hard for the Glock 19 handgun to get damaged or wear and tear. Most parts are made from polymer 2, also developed by Gaston Glock, and are stronger than most steel.

The magazine is made of polymer and steel that make it strong enough to prevent bending.

The Glock 19 is easy to use even for beginners, especially because of its size. The grip also makes it easy to control the kickback while shooting. In addition, you can customize the gun to fit your hand by adjusting the grip.

Because Glock 19 is mostly made out of polymer, it is not heavy. It makes it very attractive, especially for people who carry them the whole day, such as the police or military.

The size also makes it a concealed carry option, perfect for detectives, plain-clothed police officers, and civilians who carry the handgun outside.

For any gun to work effectively, you must maintain it properly. To do this for the Glock 19, make sure to clean and oil it. Do this before the first use and after every use. If you have not used the firearm in a while, make sure to service it after a month.

Be careful and follow the manufacturer's instructions when disassembling your gun to avoid misfiring. You can use a toothbrush or any other nylon brush to remove the dirt and not any metal that would damage the gun's internal parts.

Restrain from taking something sharp to clean the barrel. Instead, use a bore snake. It is a softer metal that will not destroy the firearm's finish.

The next step would be to lubricate. Please do not use too much oil because it will be too greasy for the gun to function properly.

Consult your dealer or verified Glock 19 armorer if you need to replace any parts. You can pass on the gun to your future generations with proper maintenance. 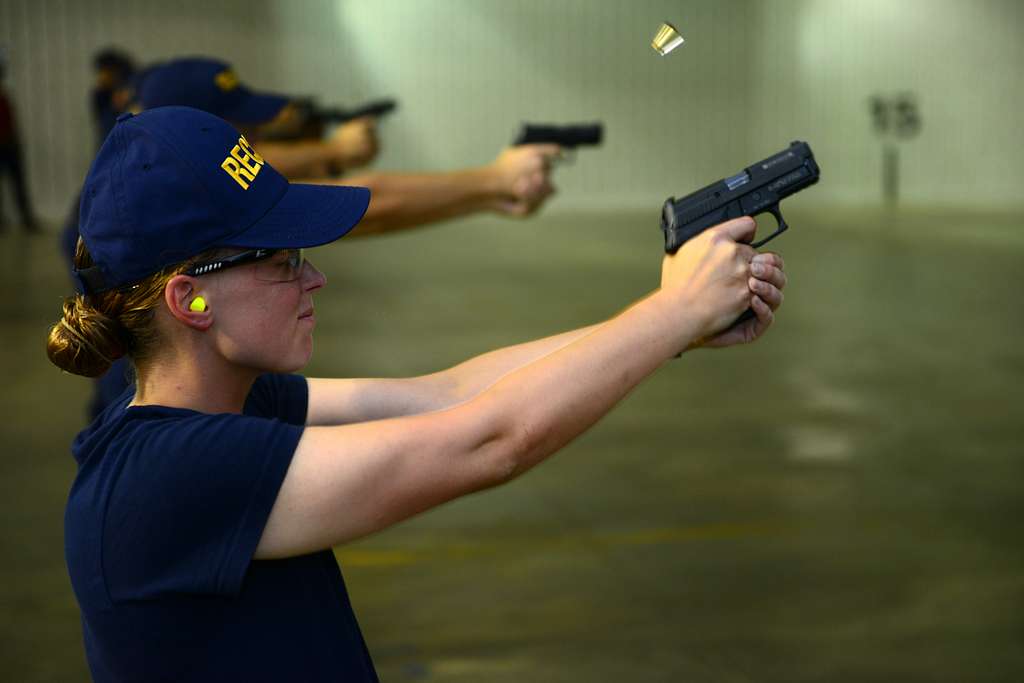 Because the gun industry is a competitive market, Glock 19 has some competitors that do not fall too far behind. The other popular handguns include the following:

Like the Glock pistols, Sig Sauer is a best-selling gun in America, and for a good reason. They are high-quality guns. The U.S. military uses this company as their official gun provider. Here are two of their best pistols:

It is the best-seller of the line at the moment. It is a high-capacity micro-compact pistol, meaning it is easy to conceal and carry all day long while still maximizing the magazine capacity.

The P365 comes with a double-stack magazine that can hold 10 9mm calibers. The size of 3.1 inches makes it easy and comfortable to use. Another exciting feature is the smooth trigger, especially for a striker-fired gun.

The grip module for the P365 is a polymer and is fully textured, which enhances the control, especially during recoil. It also comes with night sights, so you do not need to spend extra money. 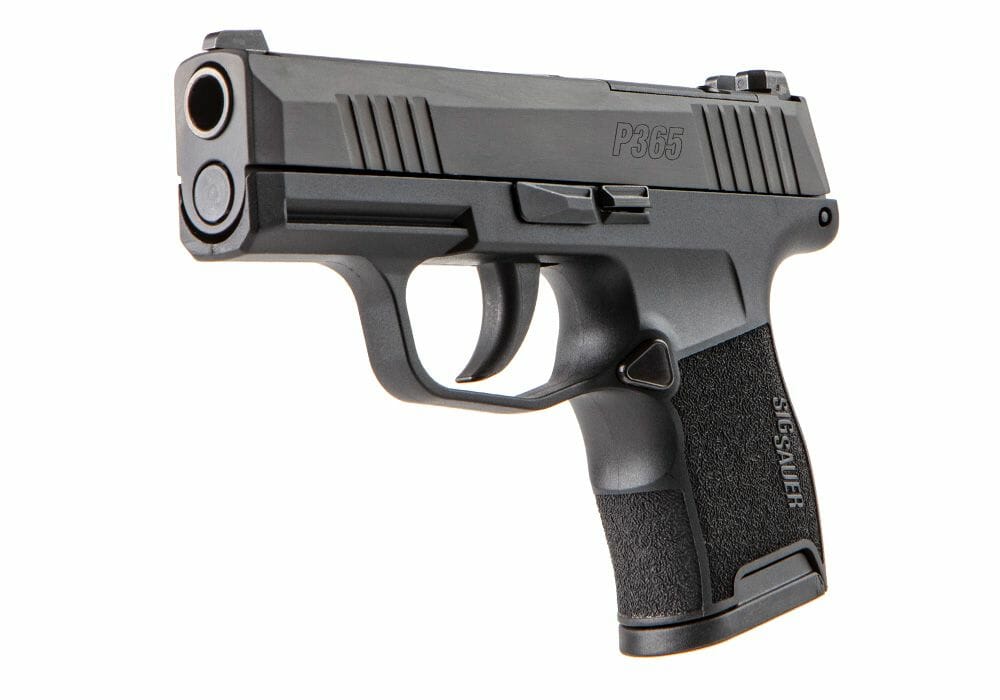 The P226 has been a favorite firearm for the U.S. Navy Seal for years now. The love for this handgun trickled down to the civilian and has resulted in its huge purchase rate.

It is a full-size, semi-auto pistol. What attracts many people because of its smooth trigger and little recoil. The magazine can hold 10 to15 9mm calibers. 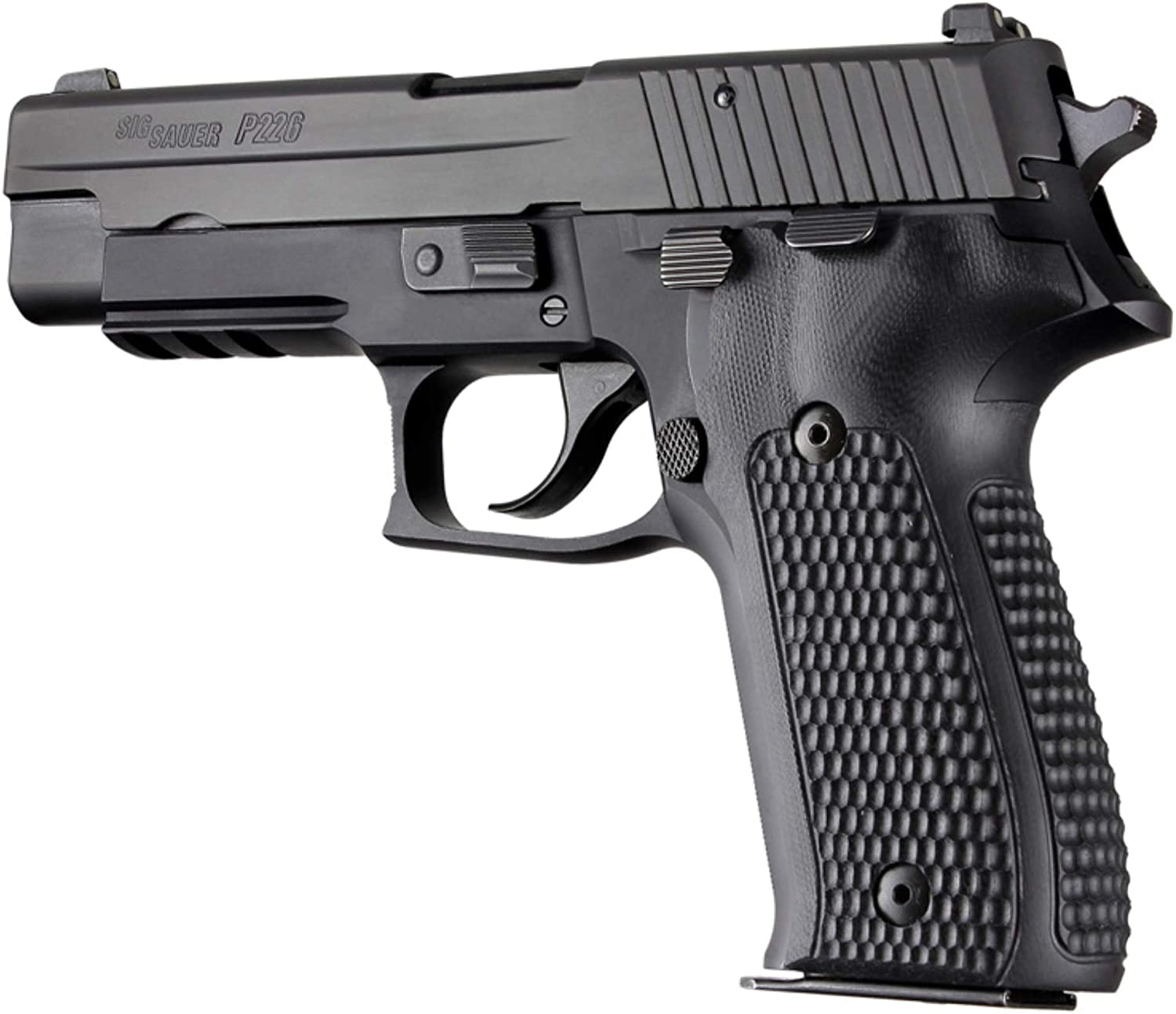 Springfield XD is also one of the best selling guns in the U.S., and this is why:

The firearm was made for competition purposes, which means high accuracy levels. Its lightweight makes it easy to operate.

It is a striker-fired handgun with a caliber capacity of 16+1. The Springfield XD comes in different sizes, giving you a chance to choose which one suits you best. The calibers also come in different sizes from; 9mm, 4 ACP, and 40 S.W.

The recoil is decent, and that gives a good shooting experience. Springfield is also affordable, which is a major attraction to many potential buyers. It is easy to conceal because of its slim build. 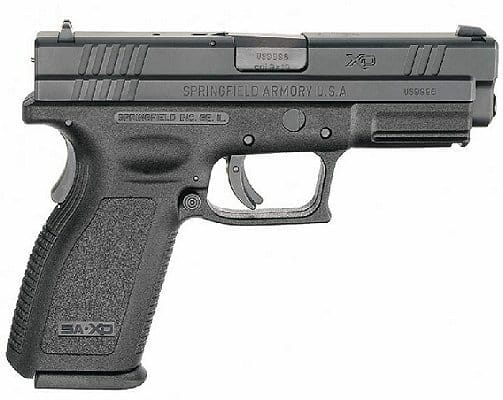 The Taurus makes it on the best-selling guns list because of its affordability. It is now as fancy and high-tech as the ones mentioned above, and functional too.

Additionally, its size makes it the best-concealed carry pistol. It has a width of 1.08 inches and a length of 5.8 inches. It has a caliber capacity of 11. The only downside to its size is that it might be too small for most people with full-sized hands. It might interfere with the grip. 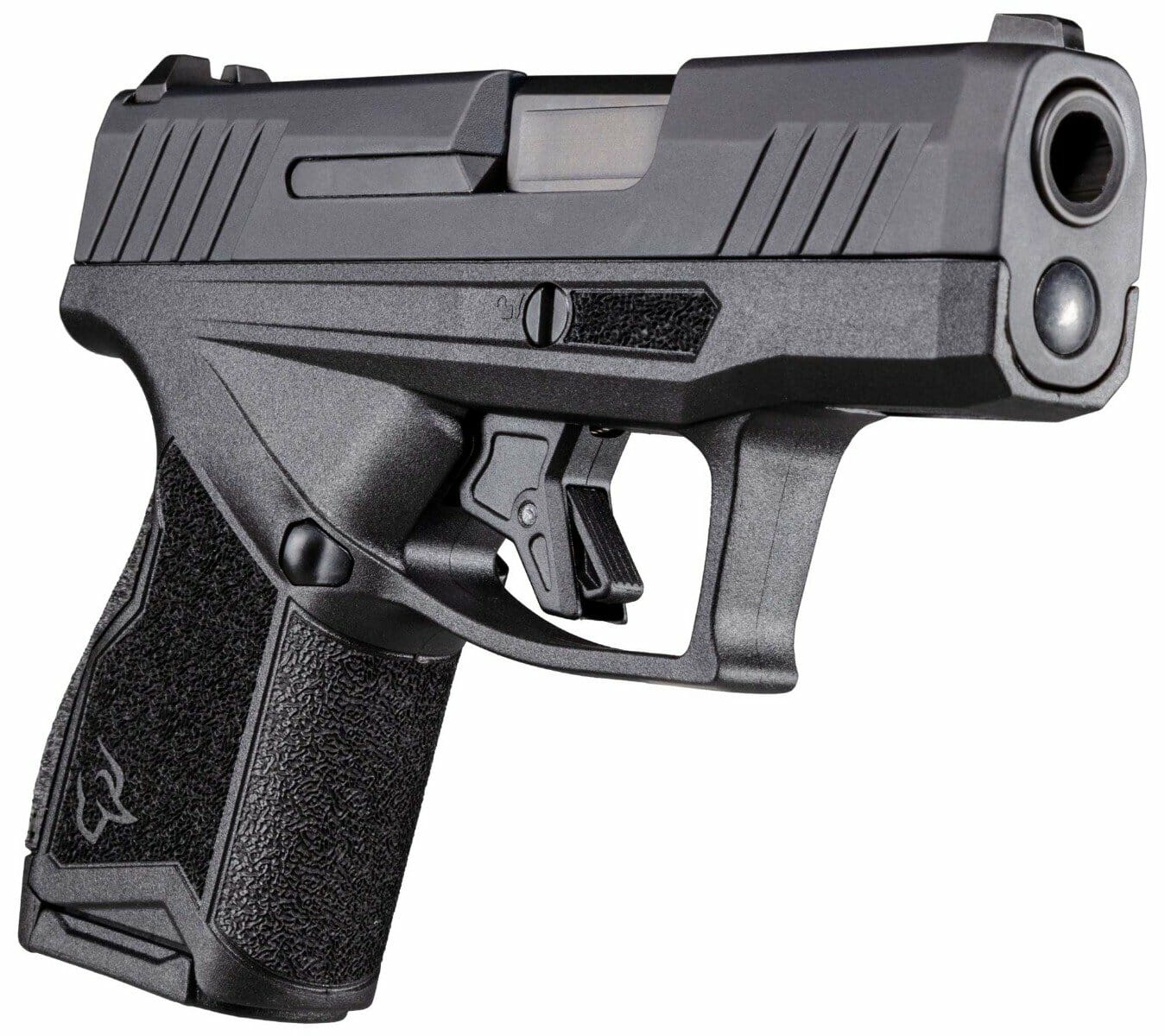 The Different Types of Handguns

The type of handgun is determined by how it functions. Here are the different categories:

Revolvers have multiple chambers, usually between 5 to 8, in the cylinder. Each time you fire, it then rotates for the next chamber to come up. Some shooters will find the double action or single action triggers very hard to embrace since the initial shot needs more effort than others, but that is a topic for another post.

A semi-auto handgun has one chamber. When you take a shot, the bullet casing is ejected and the next bullet placed on the chamber.

Why Are Handguns So Popular?

Most Americans that have a passion for guns have been brought up in the gun culture. Handguns were around them as they grew up, and most of them became owners when they became adults.

Their fascination with guns is the same as people that enjoy sports or food. If you want to know anything about guns, these are the guys to go to. They love their guns and take the time to learn everything they can about them.

Some people enjoy hunting and gun sports such as target shooting. Hunting has been a tradition from a long time ago in the U.S. and has passed it down generations. Many families took pride in hunting, and therefore guns have been part of their lives.

Another reason handguns are popular in America is protection. Many civilians buy guns to protect themselves, home defense, and loved ones against anyone who poses a threat. With the level of weapon-related crimes, especially homicides, most Americans feel safe having a gun for self-defense.

Security personnel, police officers, and military personnel need guns to protect themselves from criminals if need be. Their profession calls for them to be armed.

Another reason handguns are popular in America is protection. Many civilians buy guns to protect themselves, home defense, and loved ones against anyone who poses a threat. With the level of weapon-related crimes, especially homicides, most Americans feel safe having a gun for self-defense.

Security personnel, police officers, and military personnel need guns to protect themselves from criminals if need be. Their profession calls for them to be armed. 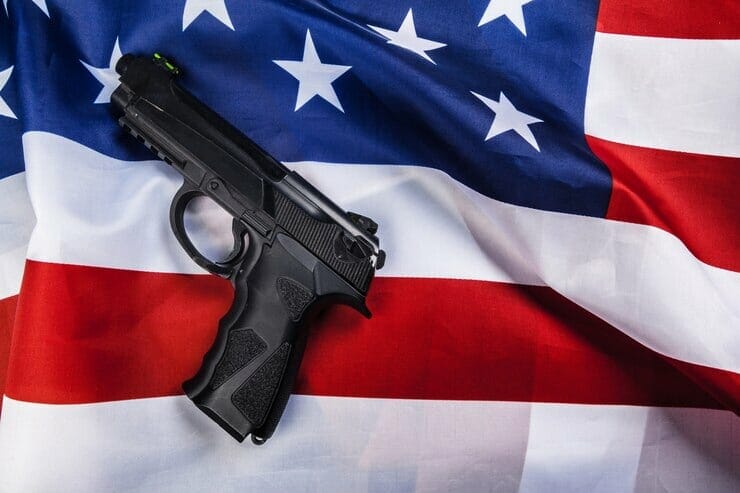 Under the Gun Control Act, you must be 21 years or above to buy a handgun from gun stores.

People who are not allowed to own handguns include: