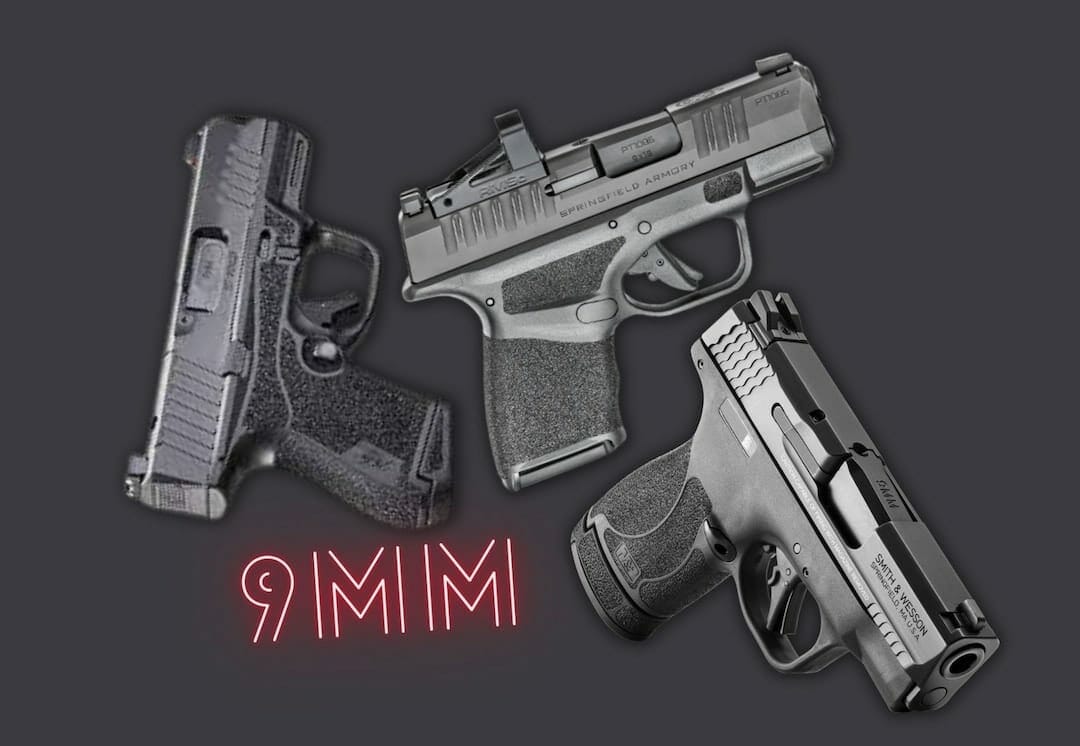 New designs of the pocket-size pistols have increased magazine capacity while keeping the guns small enough for concealed carry: ten rounds of ammunition is usually the maximum capacity for a micro-9. Many also provide excellent ergonomics besides their small footprint and ample storage space. You can use the 9mm carry gun for self-defense and everyday carry, but many outdoor enthusiasts, especially hunters, are also beginning to see their value. There are a lot of benefits you may enjoy with the best compact 9mm concealed carry pistol. Find out what is the smallest 9mm pistol.

What is The Smallest 9mm Pistol? A Comprehensive List

Below are some of the smallest 9mm handguns you can purchase for personal defense.

As opposed to the striker-fired Smith & Wesson M&P series, the CSX is a hammer-fired pistol housed in an aluminum frame. The CSX is the smallest pistol available today that fires a 9mm cartridge. It includes two detachable backstraps, and the sleek frame has abrasive texturing on the grip for a firm grip.

It has ambidextrous controls and a manual safety that, despite being stealthy, can be readily disabled. 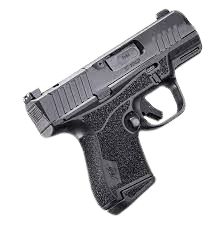 There are 10+1 and 12+1 capacity flush and extended magazines included. Comfortable to fire even for those with larger hands, the CSX boasts a quick take-up and smooth trigger pull.

The new micro 9mm handgun from Smith & Wesson, introduced at SHOT Show 2022, deviates significantly from the design paradigm that the micro 9s guns that came before it had been established. The CSX is a metal-framed handgun with only a single-action firing mode, it is not a 1911. 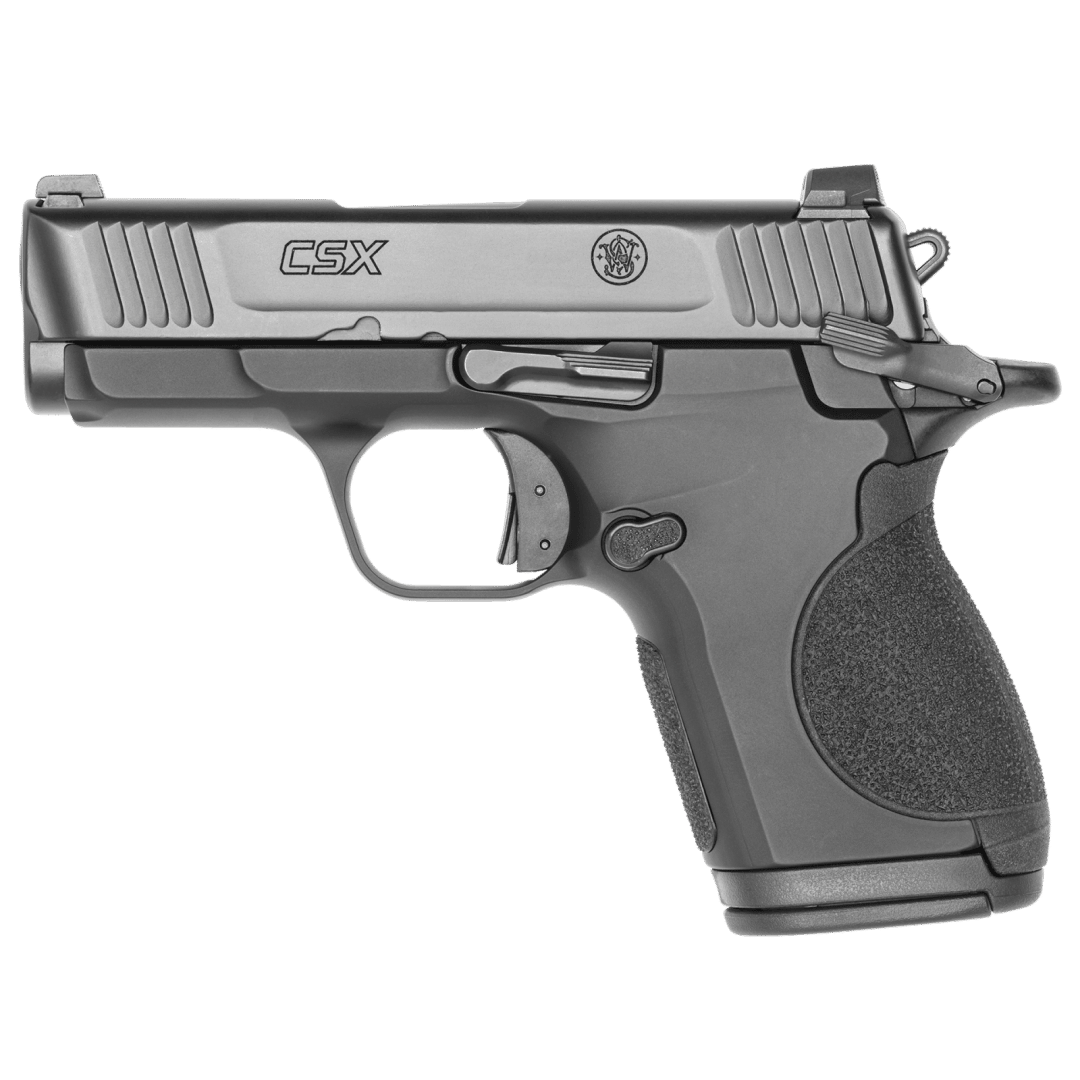 During the design process for CSX, S&W was not afraid to experiment with novel ideas. The M&P CSX has an aluminum alloy frame, which makes it incredibly compact and lightweight. However, the gun is still comfortable to use and can accommodate flush-fitting magazines with a capacity of 10 plus one.

Wilson Combat's SFX9 subcompact pistol is an excellent option for those who need a concealed-carry handgun but don't want to sacrifice capacity. Although it is not as small as the micro 9mm pistols that kicked off this trend, the SFX9 is remarkably compact considering its 15 rounds plus one capacity. 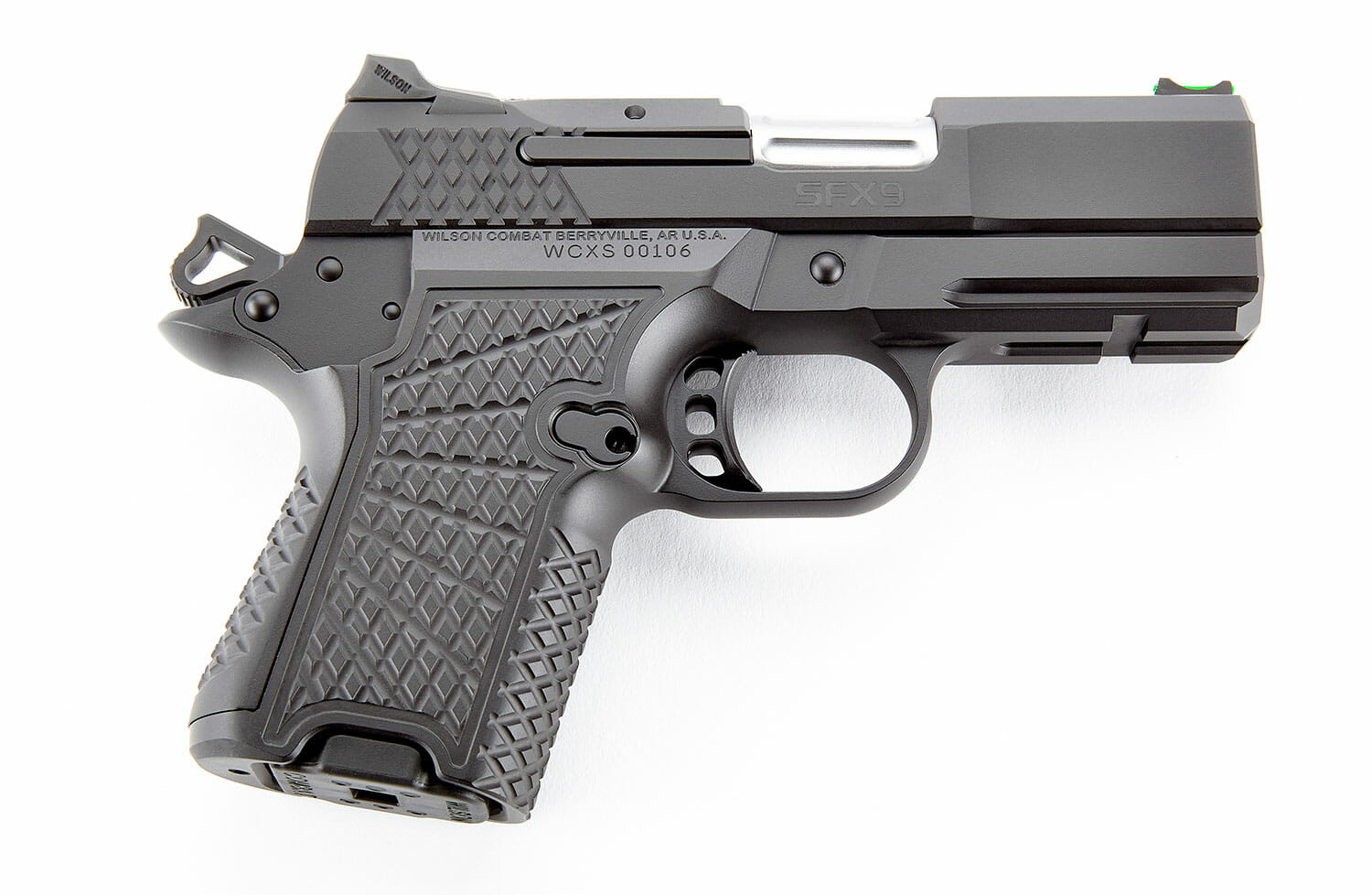 That is also the sole genuine member of the 1911 pistol family that is included on this list; hence, if you are loyal to JMB's classic design but are interested in upgrading your carry pistol, consider this one.

Ruger has entered the micro 9mm competition with a little pistol with all the necessary components to compete. The striker-fired Max-9 has a capacity of up to 12 rounds in its extended capacity magazine and ten rounds in its flush-fit magazine, making it a good choice for concealed carry despite its compact size. 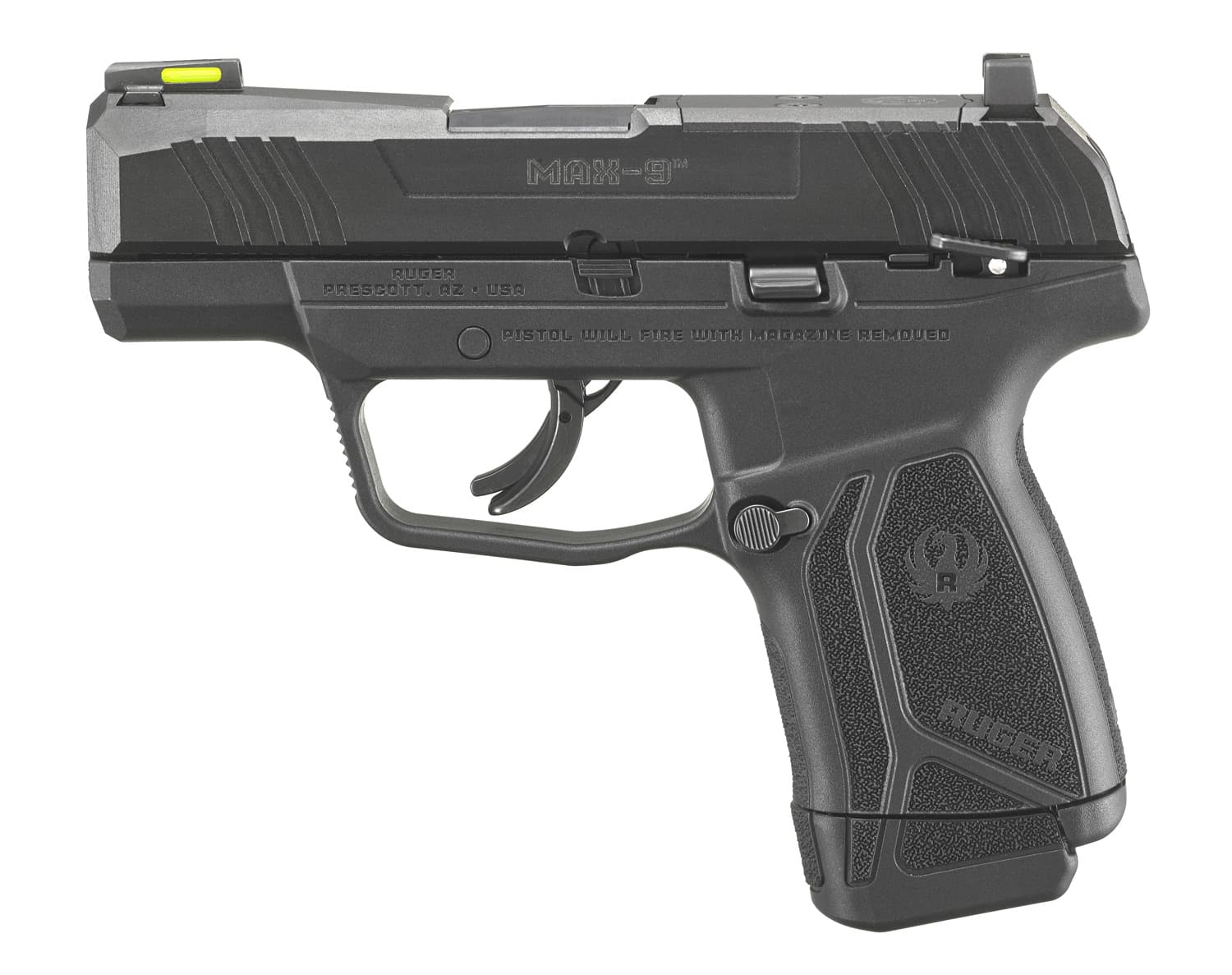 The rifle has a barrel length of 3.2 inches and features exceptional craftsmanship, including aggressive grip texturing on all grip faces and adequate cocking serrations on the slide. Besides being a contemporary interpretation of the concealed carry handgun, it features an optics-ready slide cut that fits nicely with various red-dot optics.

It should be no surprise that the Hellcat micro 9mm is regarded as one of the finest examples of a micro-compact pistol. To put it another way, it satisfies every need. Besides its small dimensions of 18 ounces in weight and 4inches of height, the 9mm maintains a capacity of 13+1 rounds. In addition, the striker-fired isn't barebones, it has a flat face trigger, a high-visibility Tritium front sight, and a U-notch rear sight. 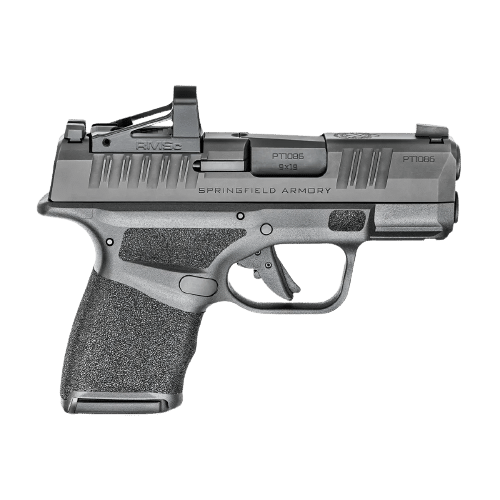 With the revolutionary P365, SIG managed to fit a full-sized capacity magazine into the compact dimensions of a tiny 9mm pistol, making it more concealable. Its flush-fit magazine can hold ten rounds plus one and increase its round capacity to 13 with an extended magazine. It is 1 inch wide, has a weight of 17.8 ounces, and comes with fiber optic sights.

M&P Shield Plus from Smith & Wesson.

People had once boasted about the Shield 2.0 on this list, but ever with the Shield Plus, its time is drawing to a close. Although it is very similar to the older model in terms of its configuration, the Plus offers a considerable capacity advantage with 13+1 onboard. That is more than sufficient to deal with virtually any precarious circumstance that may arise. 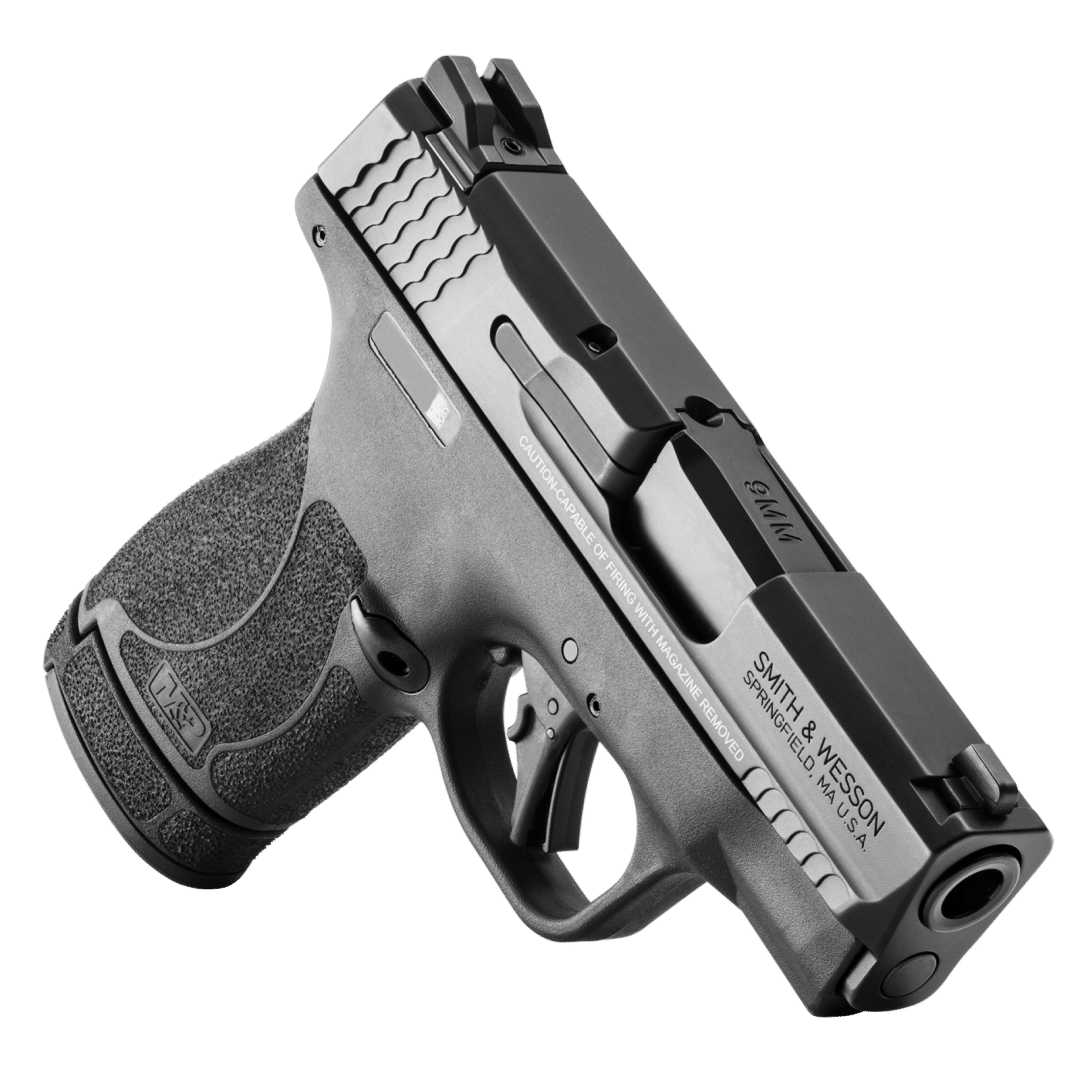 Standard and a gussied-up version of the handgun are both available from Smith & Wesson, which comes from the company's Performance Center. The good news about the latter is that besides having a beefed-up trigger, the pistol is optics-ready and can even be purchased with a Crimson Trace red dot already mounted by the manufacturer.

The monolithic frame of this revolver is constructed out of aerospace-grade aluminum of the 7000-series. Besides that, the cylinder is made of stainless steel, and the overall weight of the revolver is only 17.4 ounces, which is not excessively heavy for a 9mm six-shot revolver. It has three full-moon clips for speedy reloading.

The Ruger EC9s has a polymer frame and semi-automatic pistol weighing 17.2 ounces and has a capacity of 7+1 rounds. It has an overall length of 6 inches and a width of less than 1 inch. The sights are built right into the alloy steel slide. This magazine can be customized with a finger extender that comes with the purchase. 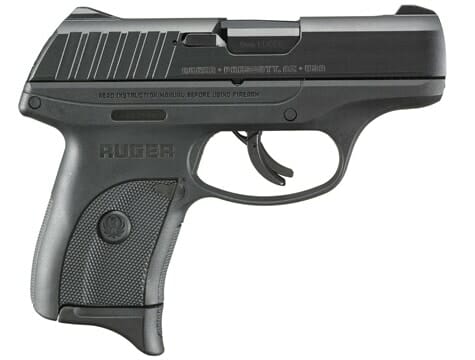 The G43, one of the most awaited Glocks ever created, lived up to its expectations. The overall length of the 6+1 backup gun is 6.26 inches, and it weighs 17.95 ounces when it is unloaded. Although it is on the bigger end of the micro pistol spectrum, it is nevertheless numbered among concealed carry handguns as it has ever been. The aggressively textured grip makes it easy to fire, and the big magazine catch facilitates rapid magazine reloads. 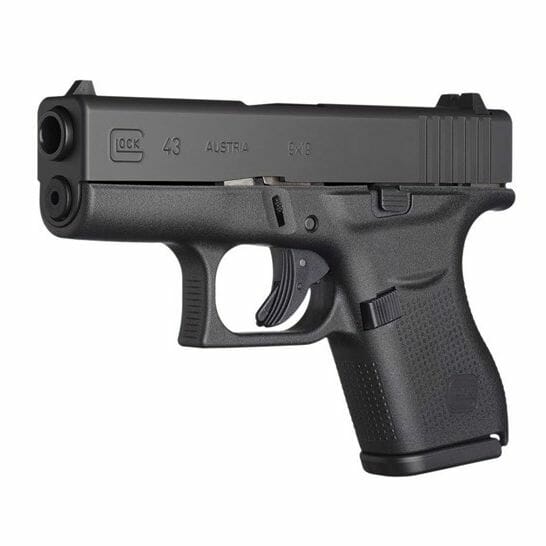 How to Choose a Concealed Carry

Before deciding to go for your preferred 9mm handgun, you need to consider the following: 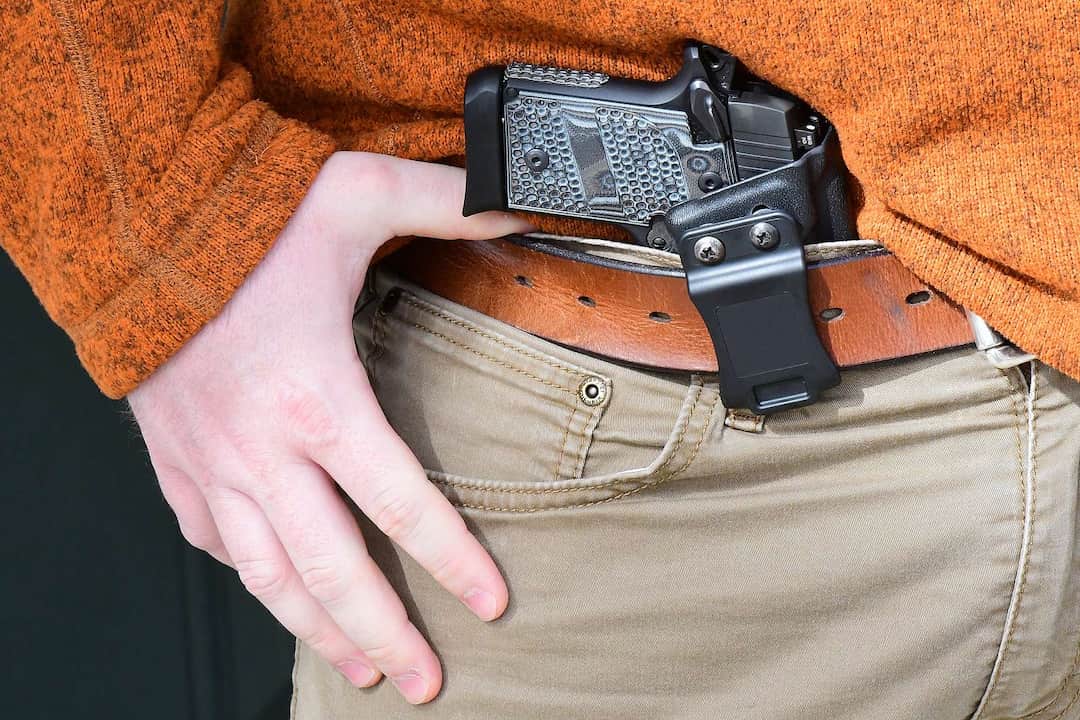 What is the smallest 9mm handgun made?

The PF9 is the smallest 9mm handgun made. It has a width of 88 inches and weighs 12.7 ounces. Get the extra clip to increase your magazine capacity to nine shots.

Smith e Wesson CSX The CSX was the smallest 9 mm handgun in 2021. The abrasive substance is textured into the front and rear of CSX's body. Besides that, it comes with two leather straps that can be replaced with others if desired.

What is the smallest pistol available?

The smallest handgun available has a weight of just 26 grams (0.91 lb). The gun has a smaller caliber of 0.68 millimeters and can shoot at a depth of five meters (16ft). It is a scaled-down version of the Luger P08 handgun. It also has a grip texture made of plastic and stainless steel.

What is the shortest 9mm?

The shortest 9mm gun available is the 9mm Kimber Solo. It has a barrel that is 2.67 inches shorter than the barrels of other pistols of comparable size. The awesome gun weighs only 17.3 pounds. That weight is only a few ounces heavier than the previous lightest equivalent model.